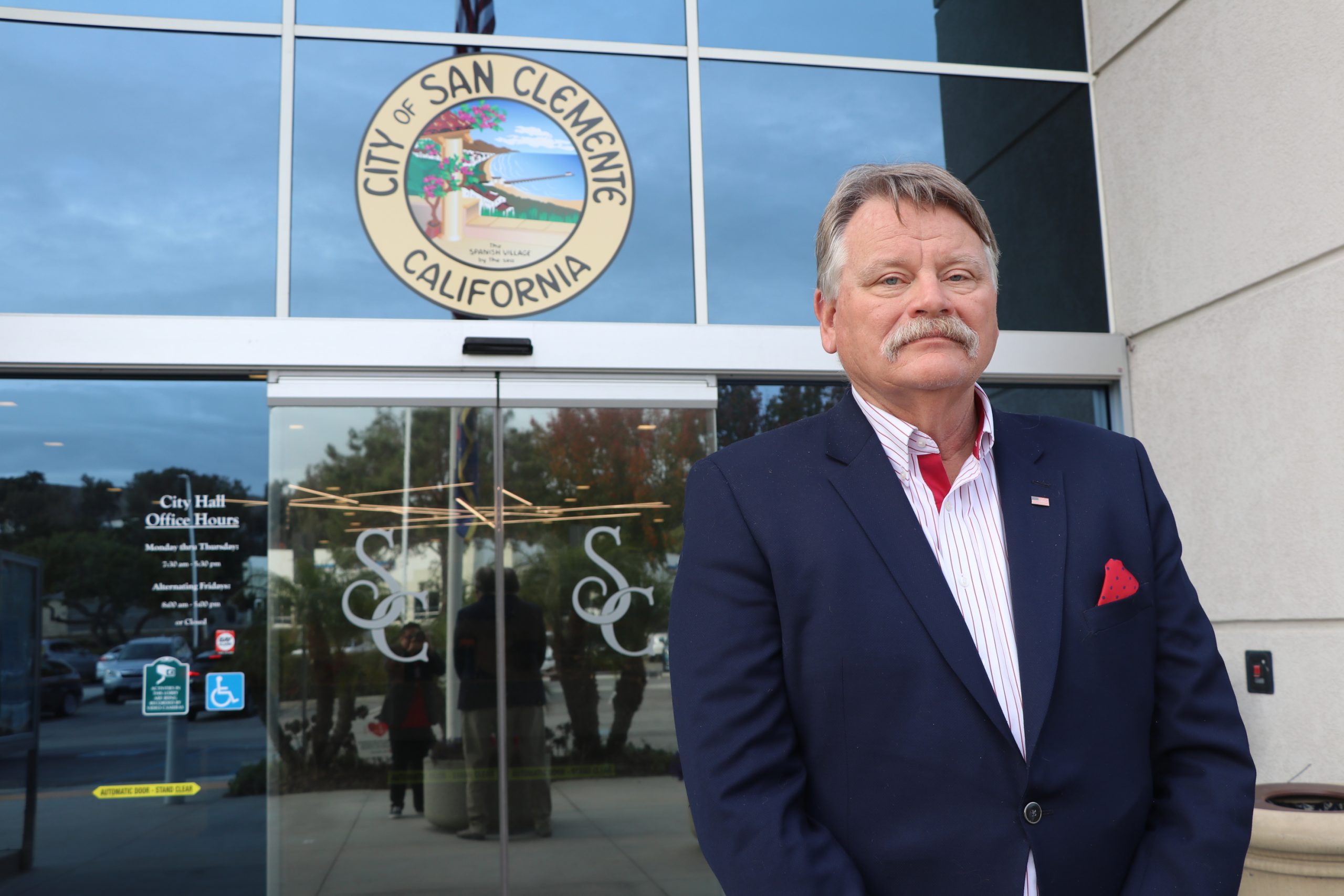 Looking Ahead: Gene James Steps into the Spotlight

In the midst of his third year on San Clemente’s City Council, newly minted Mayor Gene James looks to protect the city and be responsive to the residents. Preserving the city’s natural beauty and culture is his top priority for the upcoming calendar year.

In a sit-down interview with the San Clemente Times on Dec. 16, James spoke about aiming to continue what previous mayors and city councils have done, while avoiding the path of other local cities that he said have “sold their soul” to developers.

He said it would be easy to over-develop the area, build 4- to-5-story buildings, and construct high-density housing in order to build revenue. However, those actions would not maintain the “essence” of San Clemente, reflecting a change in philosophy that James developed over time.

Having the perspective of wanting moderate growth and smart development has led the mayor to consider what entities could come to San Clemente. James said he hopes to make progress toward bringing the right kind of businesses to town that bring desirable products to the local population.

When asked about the city’s greatest asset, James said that from a natural perspective, the answer is the beaches that dot the coastline.

With the looming problems of climate change and the decline in sand that is brought down to the beaches, the city will have to engineer a plan to nourish the coast.

“We protect (the beaches) by, No. 1, sand replenishment, but that will only be part of the solution,” James added.

Regarding the challenges presented by the emergence of the Omicron variant of COVID-19, which prompted the state to institute a one-month indoor mask mandate scheduled to end on Jan. 15, the mayor said he was looking to get an exemption passed for the city.

He referenced how California exempted San Francisco from the rule, in part because of the city’s high vaccination rate of eligible residents.

As a result, James had asked City Manager Erik Sund to look into how San Francisco achieved its exception, if other cities had done the same, and to review San Clemente’s data to learn if the city could also do the same. At press time, however, the city had not announced an exemption to the mandate.

James also expressed an interest in handling the city’s finances through zero-based budgeting to combat the rise of inflation—a strategy he mentioned in a previous City Council Corner column.

He described the zero-based budgeting as an alternative to how government normally operates, in which it decides to increase a certain amount of money spent on a budget item by a fixed percentage. Zero-based budgeting works to justify every expense for every period.

“The downside to zero-based budgeting is the need to actually have a dedicated resource to look at every budget item, every period, (or) every month, adjust the budget up or down according to needs, and work with department heads on that budget,” James said. “It’s not just putting together a budget at the end of a fiscal year for implementation in the next year.”

The process is used elsewhere, including in Houston, Texas, and James felt confident that he could earn the necessary support from two other councilmembers to vote to start using ZBB in San Clemente.

One of the mayor’s top concerns is dealing with Rancho Mission Viejo’s Planning Area 5, an area that could encompass about 2,400 homes and bring 11,000 to 12,000 new residents close to city limits in the coming years.

James has already been active in addressing the issue, as he motioned for city staff in June to report on the possibility of annexing the section to San Clemente.

During the interview, he echoed how he felt the future residents of PA 5 would use the city’s resources, such as the youth recreational facilities, parks, and streets, without having to pay property taxes.

He also reasoned that the staff report, whenever the City Council hears it, will properly inform them on what will happen over the next five years and what action they should take.

“The mail I’ve gotten from citizens is overwhelmingly against any kind of annexation, so I have to take that into account as well,” James said. “But as the mayor, I think it’s incumbent upon me to have staff create a report and share that report with the public.”

If the annexation does come to fruition, the city will not have to deal with the water or sewage maintenance, but they would need to institute public safety measures such as adding deputies or building a fire station. All these factors have to be compared with the potential revenue increase.

James said that in conversations with people in the know about Planning Area 5, he learned that the result could be a net loss.

“That is something we really have to be aware of, and I’m not advocating either (side) at this point,” James said. “I’m advocating that we study it and we understand what’s going to happen either way.”

Heading into the rest of 2022, James knows that more is expected of him as the mayor than in previous roles, admitting that as a citizen, candidate or a councilmember, he could get away with being a provocateur.

Now, he knows he has to lead.