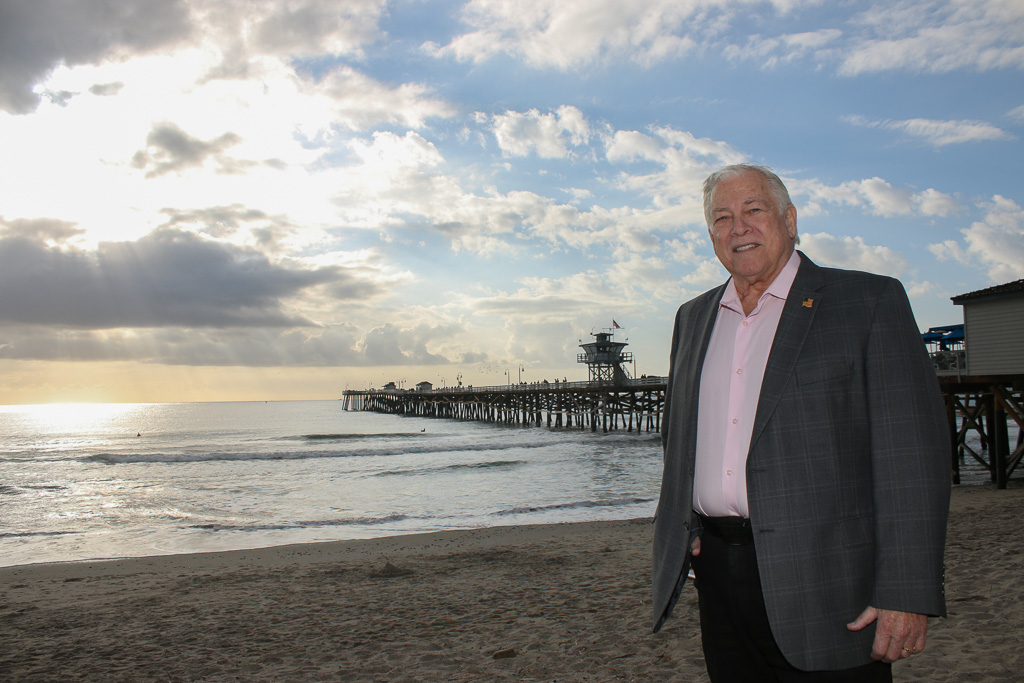 Mayor Steve Swartz was appointed on the auspice that he would bring a change of pace to the new San Clemente City Council.

He, along with new members Dan Bane and Laura Ferguson, are tasked with leading the Spanish village by the sea into a critical 2019 that could see the determination and fate of many of its largest issues, all the while grappling with a likely shortfall in available expenditures toward capital improvement projects and general fund revenue.

The issues related to the spent nuclear fuel at San Onofre Nuclear Generating Station (SONGS), the proposed toll roads and traffic mitigation, as well as the ongoing hospital lawsuit, will all likely take center stage in 2019.

Vision for the Future

Off the starting blocks, Swartz said that he wants to have a more transparent dialogue with the city’s residents, at least to the limits of his legal ability. He referenced the various forms of litigation the city has undertaken in recent years and the inability to thoroughly communicate council’s actions on such matters.

“The new members definitely won the election based upon a lot of issues that the voting public in the city didn’t feel were being addressed,” Swartz said. “I think it’s a good time to do a little shift and review where we’re at. I think it’s unfortunate that because of the fact we’re in so much litigation and…so much of that we can’t disclose outside of closed session, so it’s frustrating for us to say we’re so close on this or that, but we’re legally barred.

“That’s been some of the difficulty that the old city council had and that the new city council will learn. I think some of the (new council members) have experience dealing with some of those issues. I think we’ve moved quite well on some of the legal issues and resolved a number of them, which was my goal when I got elected to city council. I do believe I have the support now to move part of the focus for the city council to the city at-large and not just a residential area or just residential concerns.”

Swartz said he is trying to resolve the issues that are city-wide, and he also addressed what will likely be the first of at least two fiscal years of scaling back spending; as forecast in past budgetary cycles, the city is on target to spend more than it currently has.

Budget hearings will begin this spring with Assistant City Manager Erik Sund likely leading the discussion as to how the city will balance its coffers in the following years.

But since he’s been on city council, no city taxes have been increased.

“They’ve tried,” Swartz said, “and they’ve done special assessments back when you could do those. What I’ve seen is we’ve had a steady drop in sales-tax revenue, whereas our population has grown, which is telling me that we have more people living here, but they’re going elsewhere for their needs. They’re not shopping local.”

Swartz said he wouldn’t want to entertain some kind of e-commerce tax, where much of the retail market has been flooding toward in recent years.

“I think local retail will always be around because of convenience, and there’s a population that wants to see things (for themselves), and I’m confident that entrepreneurs and businesspeople will figure it out,” he said, adding that he would like to see more modernly attractive, mixed-use businesses. “We just have to make it easier for them to come to our town.”

Tourism is another source of income Swartz said he would like to explore, referencing the self-marketing that city neighbors Dana Point and San Juan Capistrano have employed in recent years.

A Critical Year for SONGS?

At a recent Community Engagement Panel (CEP) meeting in Oceanside, Chairman David Victor said 2019 could be a key year to getting certain federal legislation changed that could assist in transferring spent nuclear fuel canisters from SONGS away from the shoreline. He said this year is a particularly opportune time to achieve these goals because it’s far enough away from an election cycle, and with a new House of Representatives—some of those elected ran on platforms to seek alternative locations for the spent fuel—it could be the last chance before the remaining canisters are expected to be stored later this year.

After then-Mayor Tim Brown stepped down last year, Swartz took over as the city’s representative on the CEP, which is not a decision-making body but is intended to be a dialogue faction between the public and SONGS owner, Southern California Edison.

Since then, there have been causes for concern from the public regarding a potentially hazardous incident with one of the storage canisters in August and that there hasn’t been any recent federal action on the spent fuel canisters.

Next Exit on The Toll Roads

The draft environmental impact report from the TCA is expected to be completed later this year, and with it comes a couple of toll road proposals that the city is vigorously fighting.

Swartz mentioned the protective agreement the city is currently litigating regarding the allowance of the toll roads.

“The solution they need is to connect back to the (I-)5 further north of us, or go around us, through the base and have it connect to the south,” Swartz said.

A proposal drawn up by the Orange County Board of Supervisors is expected to be discussed at its next meeting on Jan. 29 that would connect the SR-241 extension from Los Patrones Parkway to La Pata but would circumvent the Prima Deshecha Landfill.

The study regarding the cost of services for Orange County Sheriff’s Department (OCSD) has been on the backburner for months now, as 13 cities that contract with the department want to know they’re getting their money’s worth.

“There doesn’t seem to be an understanding from the Sheriff’s Department about what it’s costing us, and that’s why I’ve supported the studies that we’re doing,” Swartz said. “I thought that if the three cities down here could come up with a joint powers agreement and come up with our own department, this could increase the visibility of our deputies and save some money.”

The study is expected to be completed early 2019.

Swartz also commented on the current homeless issues still facing the homeless population, particularly at North Beach, where the population has increased.

“We have some partners (Mercy House and OCSD) and we have a very generous population here in San Clemente, particularly this time of year,” he said, “but we need to keep working with them in order to address this. It’s not illegal to be homeless, but with it comes a lot of illegal activity.”

A civil trial for the lawsuit against the city of San Clemente is scheduled for February at the Federal Courthouse in Santa Ana, where MemorialCare Health Services is seeking $42.5 million from the city after San Clemente zoned the land on which its former hospital operated as required to provide emergency room services.

Details on the lawsuit will be covered in subsequent editions of the San Clemente Times.