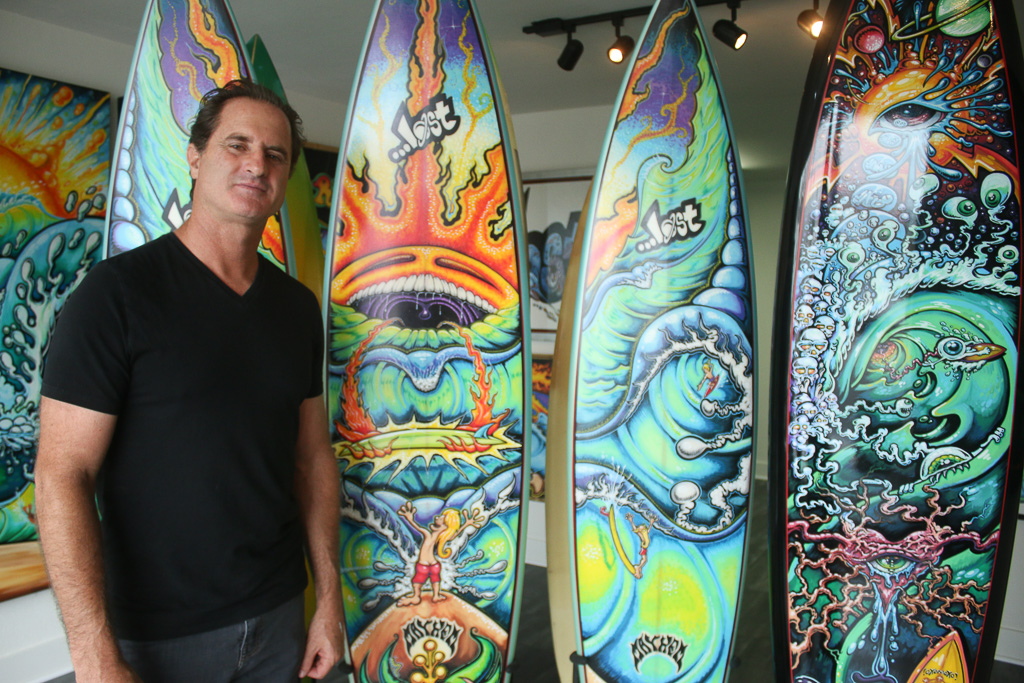 Drew Brophy’s latest art exhibit will be a homecoming—you can hear the South Carolina twang mixed with the Southern California surfer accent, as he reflects on his career.

Surreal images mixed with vibrant colors have been part of Brophy’s style since he began. He said he experimented with different techniques until he found his wave of inspiration and has honed that style ever since.

Brophy was born in South Carolina and first learned to surf in Myrtle Beach.

“I was painting surfboards in South Carolina, and I left home after that and moved to Hawaii, then came to San Clemente,” Brophy said.

The museum exhibit will feature more than 70 pieces of art Brophy has created over the years. He said he had to appeal to owners of his past artwork to let them loan the pieces for the museum. The artwork will include paintings, illustrations, designs for surfboards, clothing companies and other advertisements.

“That really helped me grow as an artist,” Brophy said, adding the atmosphere of San Clemente was idyllic for inspiring his pieces.

Drew Brophy’s work accentuates real life in a way that makes colors seem as though they’re moving through his still artwork.

This piece was completed by Drew Brophy in 1996 when he was getting his start as an artist in San Clemente.

San Clemente artist Drew Brophy stands next to several surfboards for which he made the artwork while they’re still in his studio, located at 139 Avenida Granada in San Clemente.

San Clemente artist Drew Brophy stands next to several surfboards for which he made the artwork while they’re still in his studio, located at 139 Avenida Granada in San Clemente.

Drew Brophy works on an advertisement poster for a client in his San Clemente studio. Much of Brophy’s art that will be on display at the gallery ‘Making Waves’ at the Myrtle Beach Art Museum shows the history of his career.

Brophy has made designs for …Lost, Stewart and Hobie surf companies for years and was recently commissioned to create a design for a Google surfboard.

One painting prominently displayed in his studio off Avenida Granada is a painting he did 22 years ago. In the painting, a turquoise wave crashes over some phantasmagoric sea life as an anthropomorphic sun exudes clouds of energy through its nostrils. Brophy said he enjoys looking back on some of his earlier work to see how he’s developed as an artist.

“It’s crazy to think that I was making art for a living, when I wasn’t as successful,” Brophy said.

Brophy describes himself as an illustrator for the most part, as he’s designed so many different things for companies. He wasn’t trained at a formal art school.

Brophy said he’ll travel to Myrtle Beach a week ahead of the opening to help set up the gallery at the museum. Some of the items he collected came as far as Washington state and a few other places around the United States.

The opening day of the gallery, which is titled “Making Waves,” is Saturday, June 23 and ends Sept. 16 at the Myrtle Beach Art Museum.