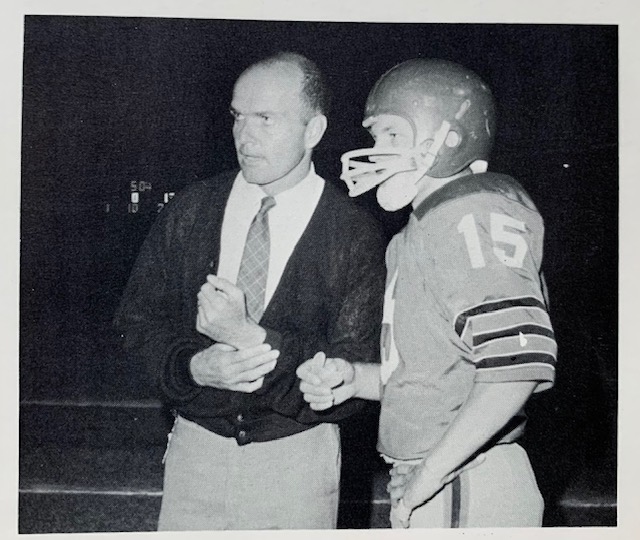 Tom Eads, who coached football and gymnastics and taught physical education at San Clemente High School from 1968-92, died on Jan. 21, his 93rd birthday, at his home in San Clemente, surrounded by family.

In lieu of a service, family and friends are invited to give a wave, honk or cheer at a celebratory drive-by for Mimi and the family at the Eads’ home. The drive-by will take place on the 300 block of W. Paseo de Cristobal in San Clemente on Saturday, Feb. 6, from 1-2 p.m.

“Everyone loved him,” Tom Jr. said. “He was a likable guy. Sort of soft-spoken, but a good disciplinarian. He was a hard worker and believed in a strong work ethic. It was a bit of a challenge to come to a beach town and get the kids to be disciplined, but he got the most out of all of his players.”

Eads grew up in South Gate, California, and after graduating from high school, he joined the Army and served in occupied Germany post-WWII. In Germany, he developed a lifelong passion for skiing, even skiing Mammoth Mountain at age 88. Skiing was one of Eads’ outdoorsman hobbies, which included camping, fishing and hiking.

After his service, Eads earned a master’s degree in education from USC and began teaching and coaching at El Rancho High School in Pico Rivera. In 14 years at El Rancho, Eads helped build the football team into a power, with CIF-SS title game appearances in 1961 and 1963 and a CIF-SS championship in 1966. Eads also initiated El Rancho’s boys gymnastics program, which won an all-around CIF-SS title in 1967.

In 1968, Eads accepted the head football coaching position at San Clemente High School, and made the beach town his home until the end. Eads was the head coach for four years, but he stayed on the staff for nearly the next 20 years, including being the defensive backs coach on the Tritons’ 1979 CIF-SS runner-up team.

Eads served as athletic director and started boys and girls gymnastics teams at SCHS, and as a physical education teacher, Eads instituted the famous “beach activities” class. Eads retired from teaching in 1992.

With an endearing smile and a welcoming demeanor, Eads was an influence on so many that came through San Clemente High School.

“He’s going to be very missed by our community,” said Mark McElroy, Saddleback College football coach and a 1978 SCHS graduate. “The people in the 50-65 range, for all of us that grew up at San Clemente High School, we’re all influenced by Coach Eads.”

McElroy was a defensive back at SCHS and was coached directly by Eads. Seeing Eads’ positive influence on those he coached and the camaraderie of the coaches, McElroy was inspired to become a coach himself, and he developed a friendship with Eads that included McElroy purchasing Eads’ RV and using his driveway as a Fourth of July parking spot.

“He’s one of those unique individuals you wanted to play for,” McElroy said, “but if you made a mistake, he’d pick you back up and make you feel good about yourself.”

Another inspired into the coaching and teaching ranks by Eads was SCHS athletic director Jon Hamro, who played for the Tritons on that 1979 CIF-SS runner-up.

“He cared deeply about his athletes,” Hamro said. “He knew the game and was super professional. If you needed someone to talk to or some advice, he was approachable. He was a man of character and integrity.”

In retirement, Eads made the most out of time with his family, with whom he had a strong, tight bond, and enjoyed many days with his wife, Mimi, on the beach in San Clemente.