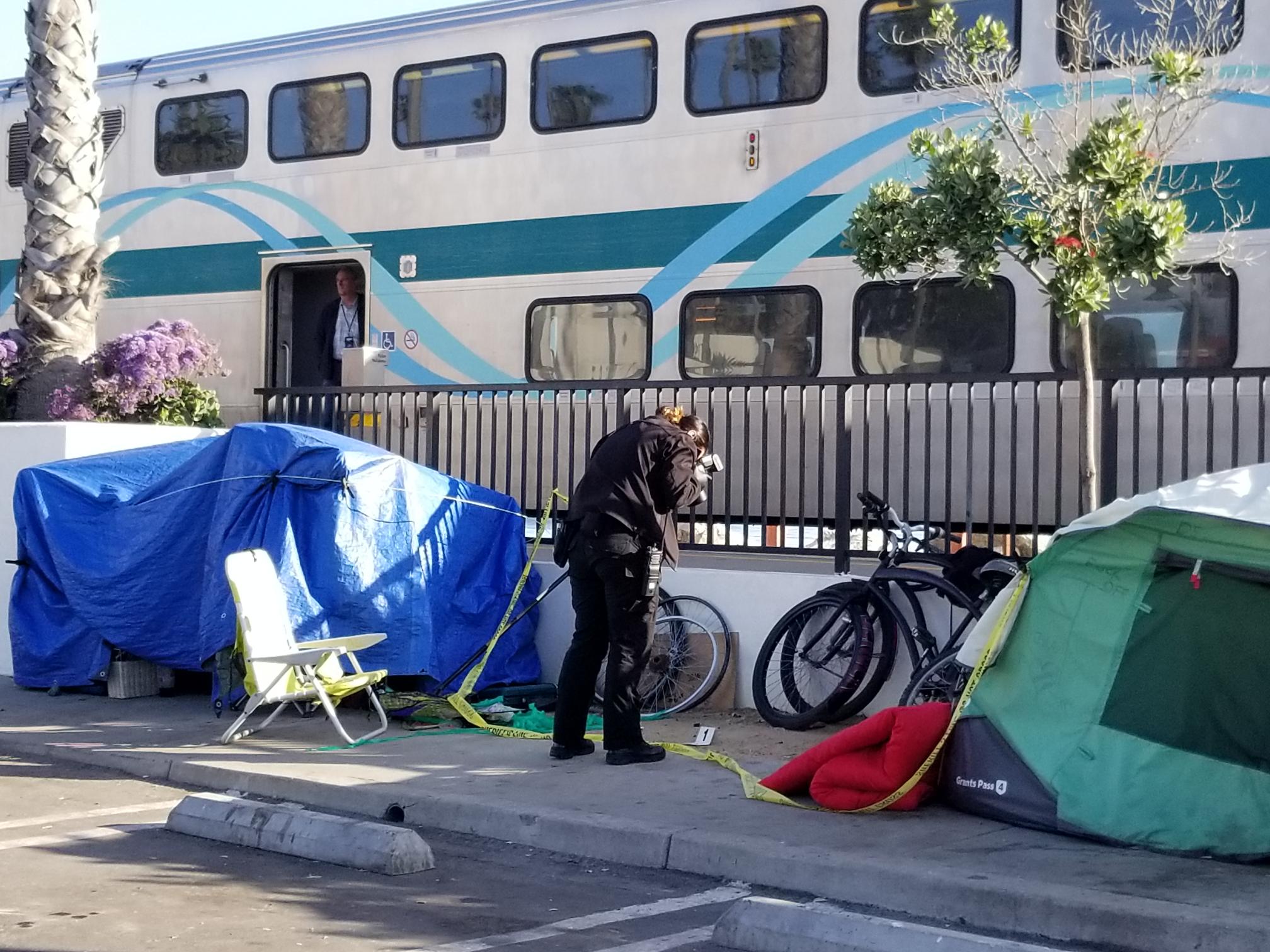 A Man is Viciously Beaten at Former North Beach Campsite

An OCSD Crime Scene Investigator photographed the ground at a campsite in North Beach, where a fight reportedly broke out on Thursday afternoon, May 23 between two homeless men.
Witnesses said the perpetrator beat another man so badly, he was lying unconscious in a pool of his own blood before paramedics arrived and took him to the hospital. The suspect reportedly walked away on foot.
Orange County Sheriff’s Department deputies were on the scene investigating the alleged assault, but said they could not provide further information on the incident.
However, Darryl McFann, a San Clemente resident of 40 years, was standing by as the fight happened.
McFann said, “The assailant kept repeating, ‘Don’t ever touch my girlfriend again!’, and he was hollering and delivering punches left and right. Then he lifted his foot up and stomped on the man’s head, more than once. That’s when I pulled him off.”
McFann, a father and grandfather, said if he didn’t step in, the perpetrator might have stomped the man to death with his foot.
While the stranger struggled against him, McFann warned the man that he would go to prison for the rest of his life if he killed this person. The assailant eventually gave up and walked off.
As the victim lay unconscious on the ground, McFann called 911. “He was badly injured. He had a lot of blood coming out of his nose and mouth,” McFann said.
After about four minutes, McFann said the man started groaning as he regained consciousness. “His teeth (dentures) had been knocked out. They were lying in the dirt,” the witness to the incident said.
McFann recognized the victim as a man named Bradley.

Standing among a group of other locals, McFann said he is one of a handful of residents who made frequent visits to the North Beach encampment to ensure things didn’t get out of control. He said he often acts as a liaison between the homeless and other people who have made violent threats toward them.
“It’s kind of brutal down here,” McFann said.
San Clemente resident Brendan O’Neil was there for similar reasons. “Most people don’t want to get involved, but my kids surf down here.”
O’Neil moved to San Clemente, because he thought it would be an ideal place where his 11 kids could live in close proximity to their schools.
Lately, he and other male residents have been stopping by the encampment at night, around 11 p.m. to midnight, to make their presence known.
“We call it tucking them in,” O’Neil said. “I think it’s important these guys know they can’t do anything they want, whenever they want. They need to know we are watching . . . because we care.”
O’Neil described a host of violations he’s witnessed while on civic patrol. including people defecating on sidewalks, “dope dealing all day long” and prostitution from nearby bathrooms.
“None of this was here a year ago. Now it’s out of control,” O’Neil said. “Then kids come down here in their bare feet, and there’s urine, feces, blood—it’s a health hazard.”

As for the violence, he said, “It’s not about homelessness; it’s about antagonistic bad behavior.”

McFann wasn’t sure if the temporary relocation encampment was the answer. But he said it will help provide temporary relief, and the timing couldn’t have been better.
“It’s like a kettle burping steam that’s about to burst,” said McFann.

On Friday, May 24, the North Beach encampment was cleared of homeless camps with OCSD deputies enforcing the city’s “urgency” ordinance that bans camping on public property. Many individuals moved their camps to the city’s designated lot on Avenida Pico. The city has posted a “Community Safety Plan” on the lot’s entrance, detailing a list of rules and standard operating procedures for people living there. Among some of the illegal behaviors that could lead a camper to be cited or arrested include violence, harassment or threatening behavior of any kind.