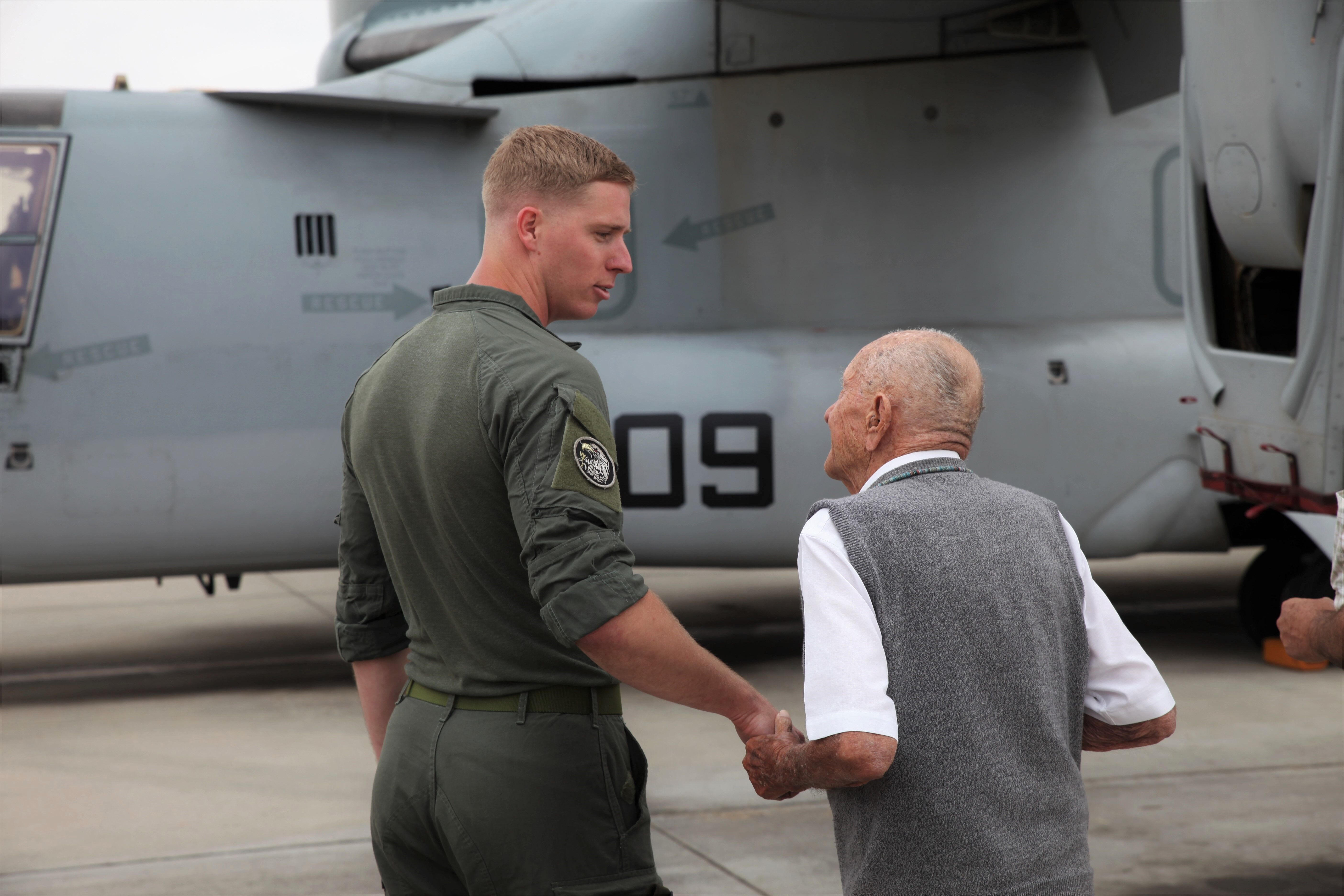 ‘Once a Marine, always a Marine’

The U.S. Marines’ pride in taking care of their own was on full display at MCAS Camp Pendleton on Friday, May 31 as they paid tribute to Maj. Richard “Dick” Cropley (USMC, Retired), also affectionately known as “Mr. T-Street” to longtime residents of San Clemente.

Dick Cropley was an original “Plank Owner” of the VMSB-235 “Death Angels,” a dive-bomber squadron that formed at NAS El Centro, CA on January 1, 1943. The squadron flew combat missions in Guadalcanal, Arundel, New Georgia and Balale during World War II.

Cropley was honored during the Marine Aircraft Group 39 change of command ceremony and parade on the tarmac before sharing a 99th birthday cake with Marine Medium Tiltrotor Squadron (VMM) 164, 3rd Marine Aircraft Wing and receiving a private tour of an MV-22 Osprey, the current primary assault support aircraft for the U.S. Marine Corps.

“I never flew anything near that size,” said Cropley. “The engine is bigger than the planes I used to fly. I couldn’t imagine how you control those big things.”

Cropley piloted numerous types of combat planes during the war, including the Vought F4U Corsair and Douglas SBD Dauntless.

“I was a fighter pilot or a dive-bomber pilot,” said Cropley. “Line up with the target and try and get a little speed before you get there, and then push over straight down.”

As a 135-pound first lieutenant during the Battle of Guadalcanal, Cropley was the smallest man in his dive-bombing squadron, but he had one of the biggest responsibilities as the “Tail End Charlie.” He was the last pilot over each bombing target during every raid. The Marine Chevron newspaper even labeled Cropley as “Mighty Mite” in its January 1944 publication for his big impact during the war, despite his small stature.

“We were pretty busy, so we’d be flying sometimes two combat missions a day,” Cropley said. “The infantry went in and took this Japanese airfield and put ground troops ashore to defend it from them, and we flew off of the airfield, and we flew from there up to the various islands and bombed them.”

Cropley and the “Death Angels” relied on their fellow Marines to protect them on their bombing runs from Henderson Field during the Battle of Guadalcanal. This is one of the reasons why Cropley said his squadron’s success rate was so high.

“We usually had a fighter escort that would keep the enemy fighters away from us,” he said. “We were under enemy fire from the ground all the time. We were attacking enemy anti-aircraft guns. We were bombing those to wipe them out.”

Despite threats from air and land, Cropley said that his biggest fear during combat missions was actually taking damage from his own bombs.

“Pulling out of the dive too late and getting hit with your own stuff,” said Cropley. “Sometimes, some of the pilots would dive down to release their bombs. They waited so long that some of their own bomb blast would hit them, but it never happened to me.”

Cropley was the commanding officer of the air base at Camp Pendleton for two years before transferring to former Marine Corp Station El Toro for four more years. Cropley and his family made San Clemente their home in 1952.

Back when Cropley was at Camp Pendleton, he used to land his plane on Basilone Road, when he had some down time, and go for a hunt.

“Things were much quieter in those days,” he said. “I’d pull the plane off in the boondocks and go duck hunting.”

Cropley retired from the Marines after 20 years and went on to further fame in the San Clemente community, becoming the owner of a popular summertime concession stand on T-Street, where he served up hamburgers from 1962-1990. The locals even named the popular surf break in front of the burger stand, “Cropley’s,” in his honor.

When asked about what it’s like to have been part of “The Greatest Generation,” Cropley said, “We must have had something. I’m pretty damn close to a hundred, and I’m still going strong.”

After blowing out the candles on his 99th birthday cake at Camp Pendleton on Friday, Cropley got a little choked up as he looked across the room at all of the Marines there just for him.

“Once a Marine, always a Marine. So grateful that you guys care about me,” he said. “Usually you retire and that’s it; everybody forgets you. Being here today and seeing all you people and talking to you, it’s really been great.”

Dick Cropley and his wife, Ann, still live in San Clemente, in the same house they built near T-Street in 1963.