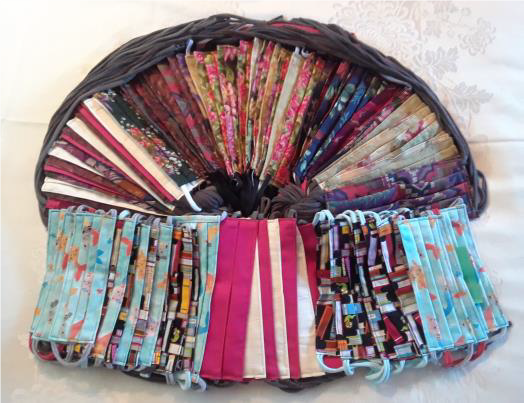 Mask-Sewing Group to be Honored with Congressional Proclamation

A local sewing group that has stitched together more than 11,000 face masks to help support area hospitals and nonprofits since the start of the public health crisis is being honored with a congressional proclamation from Rep. Mike Levin (D-CA).

The SEWers of South Orange County (SOSOC), comprising women from Dana Point, San Clemente and San Juan Capistrano, have volunteered countless hours to assemble face coverings, which were donated to nearby medical centers and organizations that have been on the front lines of the coronavirus pandemic.

Earlier this month, the SOSOC reached a milestone with its 10,000th donated mask since late March, when the group formed.  To mark the milestone, Levin drafted the proclamation on July 4 to recognize the SOSOC and its founder, Louise Herbert.

Herbert, the proclamation states, is honored “for her community service and organization of the SEWers of South Orange County, to commemorate the delivery of the ten thousandth mask to help prevent the spread of COVID-19, to those both vulnerable and precious in our community and beyond.”

The proclamation also highlighted the group’s growth since late March, when Herbert first began sewing masks together. It has since become a “power group of volunteers” who distributed 10,000 masks in just three months.

“SOSOC started with a small group of volunteers with few supplies, one pattern, and fabric they donated themselves; this intrepid team delivered their first 37 masks to Mission Hospital,” the proclamation said, “And SOSOC now delivers hundreds of masks, on a weekly basis.”

In a San Clemente Times cover story on the group this past April, Herbert, a San Clemente resident and member of the Democratic Women of South Orange County, recalled starting the group after being motivated by a virtual town hall Levin had held on Facebook.

She began to experiment with some patterns she had, leading to her sewing several masks together. Looking for help, she put out a call for volunteers to assemble more homemade face coverings using bed sheets, T-shirts and other fabrics.

Neighbors and friends, she had said, began receiving emails from her, asking if they would like make masks from their own homes while she handled distribution. From there, the SEWers of South OC formed.

On Friday, July 24, Herbert said she felt overwhelming pride for the group after first hearing of the proclamation from Levin’s office.

“I am amazed at how our group has held together for almost four months, and how they have stayed committed, and everyone has worked to get people and friends to donate funds, so we can buy elastic and materials,” Herbert said.

Since the early days of the group, when there were roughly six active members, SOSOC has grown to nearly two dozen members, Herbert said.

“I had about six people sewing, and that was sewing from what we each had in our closets, and then I started having fabric donated by JOANN (Fabric and Craft Store) and Coral Thrift Store,” she said, adding that over time, “I grew to 22 sewers, of which there are 12 who are prolific.”

Many of the initial masks the group donated went to organizations such as Mission Hospital, clinics in Orange and Laguna Hills, as well as Trader Joe’s in San Clemente and the United Consumer Food Workers Union.

Several more organizations have been added to the group’s distribution list, including Alzheimer’s Orange County, Children of the Nations, Meals on Wheels, Orange County Board and Care Homes and the San Juan Boys and Girls Club.

Though the group is on a roll, distributing hundreds of masks weekly, Herbert said she’s always looking for additional volunteers to become a member of the SOSOC, as well as those willing to donate money to the group to purchase supplies.

Herbert stressed that the group of volunteers represent a variety of backgrounds, regardless of political affiliation or religion, and that their main goal is the care and safety of all people here.

To volunteer with the SEWers of South OC, email Herbert at louhsc52@gmail.com.