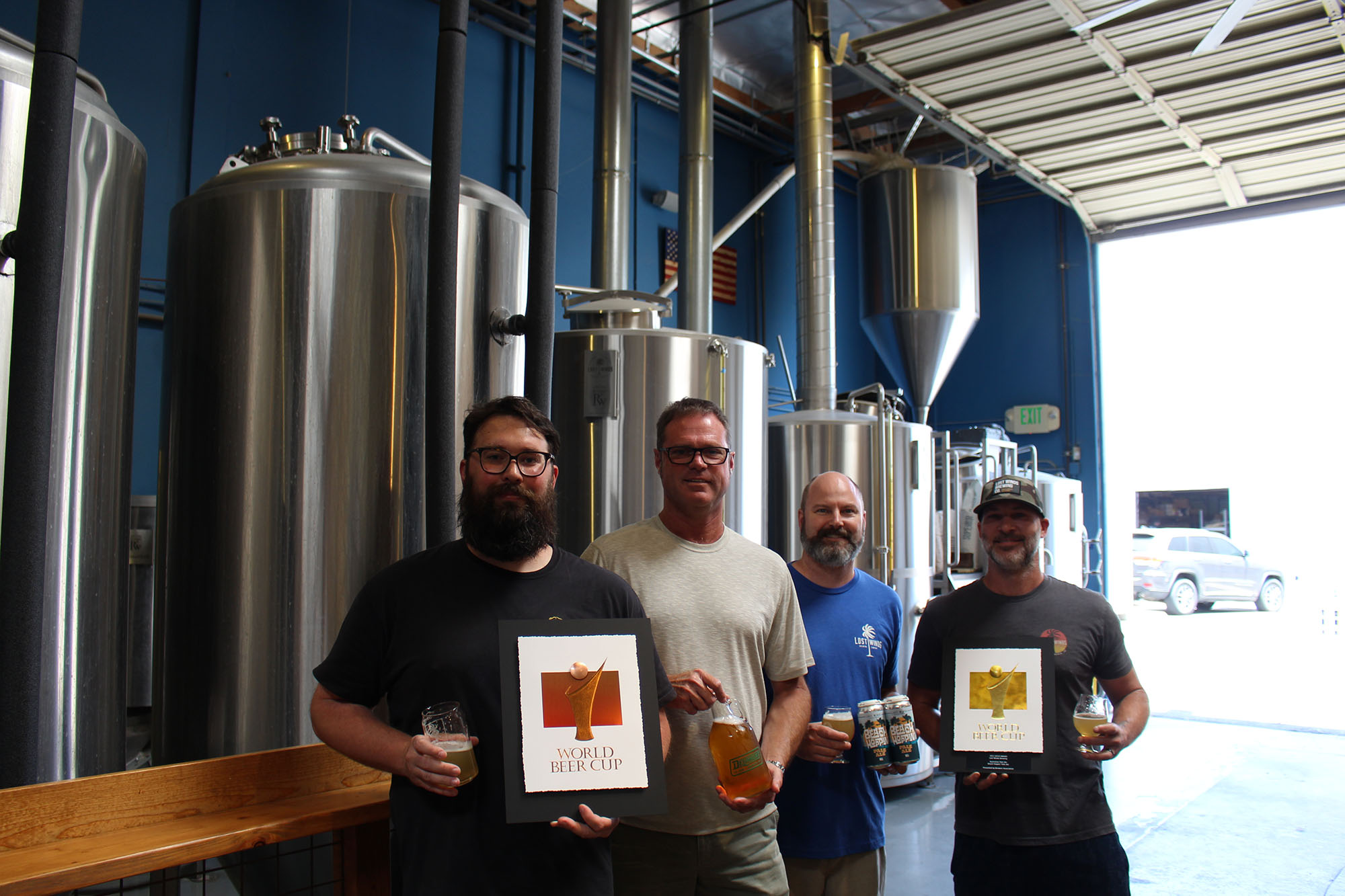 Lost Winds earned a gold award in Australia-Style Pale Ales for its Beach Hopppin’ Hoppy Pale Ale, while Pizza Port San Clemente’s Dusk til Dawn received a gold in the Coffee Stout or Porter category. Delahunt came away with a bronze for its American-Style Cream Ale, De La Sol.

The World Beer Cup, one of the most prestigious beer competitions worldwide, awarded beers from more than 100 style categories during a ceremony in early May in Minneapolis, Minnesota.

Fulfilling a 20-year dream, Tim Thralls founded Lost Winds in 2016 and added the experienced Brandon Winneker to his team. And in 2020, Todd Delahunt started Delahunt Brewing Company with Kyle Boruff.

The winning breweries were among numerous companies in Dana Point, San Clemente, and San Juan Capistrano that also submitted entries into the international competition—one in which more than 10,000 samples were reviewed and judged.

Delahunt said he was unaware of any fellow brewers who didn’t submit samples for the contest.

Winneker described waiting for the results as “hell,” and Thralls likened it to “waiting on eggshells.”

The samples were due at the end of March, but as Winneker said, often in such competitions, the judges do not review the beers for a month or more, so the beers are sitting in cold storage. When competing against larger operations that are able to send in the freshest samples possible, that can add pressure to the waiting game.

“Sometimes, it’s pretty nerve-racking that our beer is sitting there as long as their beer is, especially IPAs,” said Winneker, adding: “In my opinion, they should just judge everything fresh, right when they get it.”

Regardless, Lost Winds found it had a winner among its four submissions, as did Delahunt Brewing of its six entries.

Selecting which beers to send can be an interesting process, especially against some of the more renowned, top-tier competition.

Delahunt said they try to send their best examples by category, as there are some products that never do well because they do not fit under certain guidelines. He added that the brewery pushes what they hope will be accurately and properly judged.

“We’re not looking at categories and saying, ‘Oh, let’s brew this to make it fit in that category,’ ” Winneker added. “We’re brewing beers that we like, that people like, and then we look at the categories and we’re like, ‘OK, this fits best in this category.’ ”

Lost Winds’ champion, Beach Hopppin’, was created for the company’s five-year anniversary party last October, and is a product they have been proud of since the beginning.

Thralls described it as a perfect combination and a refreshing, lighter beer. The low amount of alcohol, lack of bitterness, and flavorful and aromatic nature all combined to earn it the highest praise in the eyes of World Beer Cup judges.

He and Winneker collaborate on all of Lost Winds’ recipes, and of the 20 beers they have on tap, half are constant offerings, and the others can be switched out for new styles.

Winneker said they receive significant feedback from locals who come in with suggestions, and if they hear enough regarding a certain type, or the time of year makes sense to brew it, that’s a way of adding a beer to the menu.

“It’s as easy as just sitting down with (Thralls) over a beer, firepit, whatever, and just (talking) about, ‘What kind of grains (do) we want? What kind of hops (are we) thinking about using? Do we want to put it in draft cans?’ ” Winneker said.

Thralls, who said the creation process was his favorite part, added that they begin by conceptualizing what kind of beer they want and how they want it to taste and smell. They rely on their experience with ingredients to formulate the beer, and then it goes into their regular system.

“There are a lot of breweries that have like a one-barrel, very small test system that they can try,” said Thralls. “But we just go for it.”

For Delahunt Brewing, Boruff said his company meets at the end of each year, and the sales representatives inform them what style they feel they can sell.

Boruff then works on sourcing all the raw materials before scheduling out the releases over the course of the next year.

“(If) you can sell it, I’ll brew,” Boruff said of his conversations with colleagues. “I’m not going to brew some beer we can’t sell, that’s for sure.”

The brewers also commented on the growth of the brewing community in and around San Clemente that has exploded in recent years.

Delahunt said he has seen the popularity grow as people have increasingly become more attuned to quality brewing than when he started. He added that he sees a lot of potential going forward.

Thralls, who started home brewing in high school before eventually starting Lost Winds, said the community factor was what got him into starting the business, especially in a town as small as San Clemente.

“When I started going and visiting breweries, we would see just all this camaraderie, and it’s a big community and everybody just seems to be really there to make everybody do well,” said Thralls. “When I started, I went and talked to all the breweries in town to let them know that I was going to open up a brewery, and they welcomed me with open arms; we’ve all collaborated together, and it’s just been great.”

Winneker said the brewing industry is unique, in which the competition is friendly to the point where he doesn’t consider other companies as competition and there’s often consistent communication between him and others.

The more breweries that are making good beer, Winneker added, the more opportunities will exist for everyone to thrive as San Clemente becomes an industry destination.

Other factors that help the city’s brewing companies include the dedication from locals to supporting the small businesses, and the city being a coastal town that attracts beachgoers. As such, that brings in out-of-towners looking to try beers and increases the companies’ footprint.

Internally, Delahunt Brewing is looking to expand its distribution into San Diego and elsewhere in Orange County, and plans to open two taprooms in 2022, one in town and another in Dana Point.

“(Our goals are) to provide just our local craft beer to the area,” Thralls said of Lost Winds. “Basically, we want to spread the Aloha at Lost Winds, have people come in, enjoy the beer, enjoy this space.”