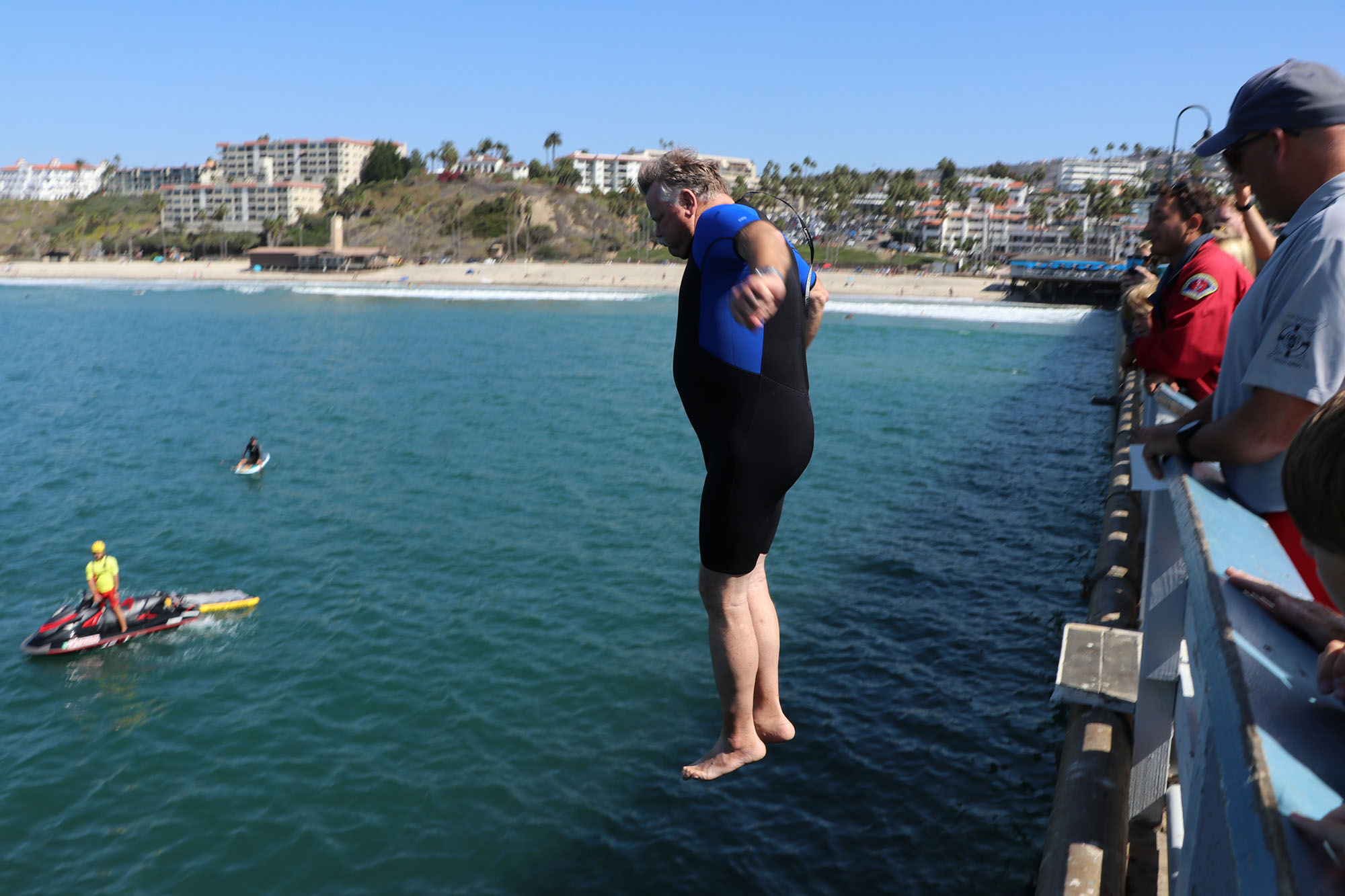 Mayor Gene James joined a dozen individuals by taking a jump off the San Clemente Pier on Sunday morning, Oct. 2, as part of an annual fundraiser that the PierPride Foundation holds on the first weekend of October to kick off PierPride month.

This year’s jump helped PierPride raise about $8,000 to $10,000—all of which will go toward the ongoing preservation and enhancement of the historical structure—according to the local nonprofit.

“It was our largest group of jumpers in the history of PierPride,” PierPride President Don Brown said of this year’s participants, who paid $1,000 for a single person to jump or $1,500 for a pair. He added that he credits “this large group to the efforts of (Past President) Eileen Kawas, who led the charge on this project this year.”

Brown also noted that the grandsons of the late Kenny Nielsen were among the group of jumpers, along with James, a “famous repeat jumper.”

James joked on Sunday, just before jumping into the water, that it was his wife who had “insisted” that he do it again.

“I don’t want to do this, but my wife insisted,” James said to a cheering crowd. “She was on the phone with USAA—something about life insurance.”

Prior to the jump, Ian Burton of the city’s Marine Safety office led a safety course with the jumpers to ensure that they know how to jump safely. According to Brown, PierPride is the only organization besides the San Clemente junior lifeguards that is “legally allowed to jump off the pier.”

Shawn Raymundo
Shawn Raymundo is the managing editor for Picket Fence Media. He graduated from Arizona State University with a bachelor’s degree in Global Studies. Before joining Picket Fence Media, he worked as the government accountability reporter for the Pacific Daily News in the U.S. territory of Guam. Shawn previously held the position of city editor for the San Clemente Times, and for The Capistrano Dispatch before that. Shawn can be reached at sraymundo@picketfencemedia.com or 949.388.7700 ext. 113. Follow him on Twitter @ShawnzyTsunami and follow all of PFM’s publications including the San Clemente Times @SCTimesNews; The Capistrano Dispatch @CapoDispatch; and Dana Point Times @DanaPointTimes.