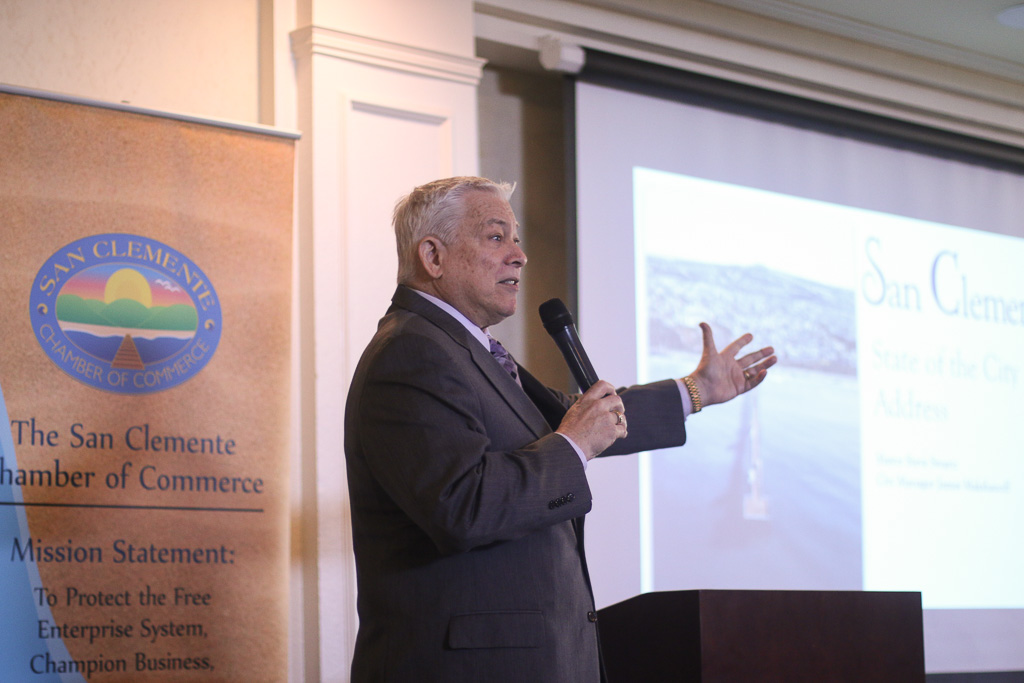 Although Mayor Steve Swartz led this year’s annual State of the City Address by describing San Clemente’s last year as a “challenge,” he was also very optimistic about some of the hurdles ahead.

“We have challenges going forward. We’ve also had a lot of accomplishments,” he said, as he credited the city staff for its work on the projects it faces.

While the city reconciles increasing costs for public safety services, it’s also looking to cut costs from its capital improvement budget. The city for the last four years at least has looked at 2020-2021, or about that time frame, as the year where the city’s expenditures will significantly outpace its revenue.

Erik Sund, the city’s assistant manager, has been working with the budget staff in order to slow these looming issues, but there will be discussion on how to shore up those expenses.

“In the meantime, the legal costs have been extremely high, and we’re working diligently to try to curtail and control that, but the problem is we’re still involved (in lawsuits) we just can’t afford to ignore,” Swartz said.

The city’s legal expenses have topped about $2 million in the last couple of years due to those major lawsuits.

Swartz made a pitch about integrating a surf school for dogs, likely to soften the blow of his next message about how some of the trees on Avenida Del Mar have been aging and roots have broken through infrastructure. But he said the city is working to get further reports on them.

Vista Hermosa Sports Park is one of the city’s most-used facilities, and Swartz said funding mechanisms for its maintenance are doing fairly well.

“We’re looking to replace some of the synthetic turf and putting up some new shade structures,” he said.

Swartz said he was encouraged by the city’s continuing efforts to stop the proposed toll road extension through San Clemente, as well as its ability to curtail sober living homes in the past year.”

“We were able to pass certain ordinances and . . . we had some bad actors in the business that (created) the South County Riviera,” Swartz said, using a nickname given to the operators of behavioral treatment homes. “They’re no longer here. I truly don’t believe that we are under any type of pressure at this time.”

Swartz also commented that the city is making progress on the lawsuit filed by MemorialCare that’s asking for $42.5 million after the city zoned the land it sits on to require a hospital and emergency services.

The next budget workshop will take place at 4 p.m. on May 22 at the City Council Chambers at 100 Avenida Presidio.