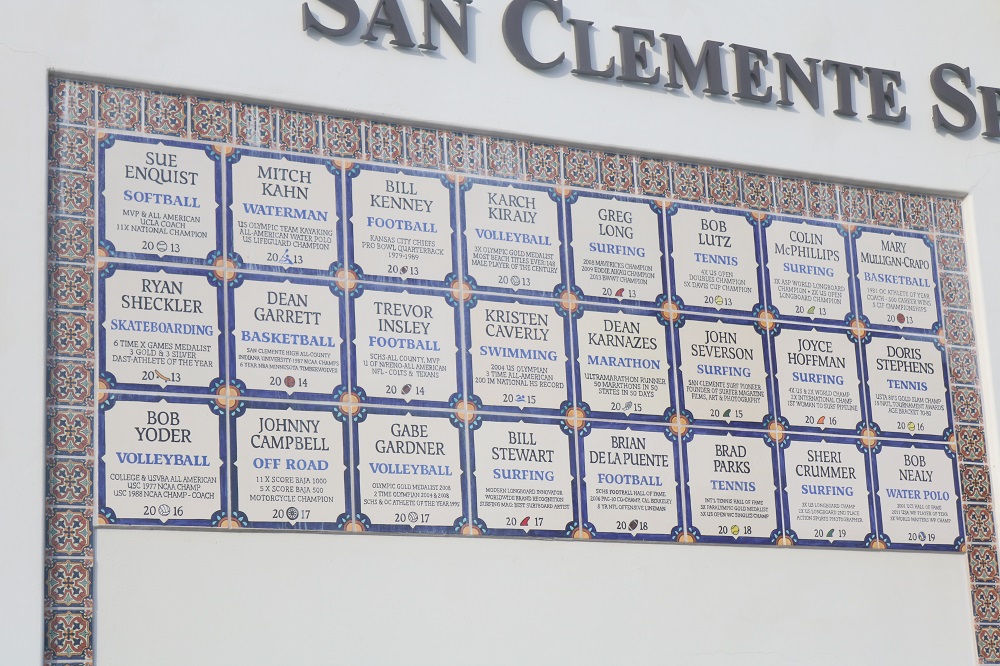 After a two-year hiatus, the San Clemente Sports Wall of Fame will welcome its 25th, 26th and 27th inductees next month.

Mater Dei boys basketball coach Gary McKnight, all-around athlete Brandi Cumin Baksic and youth sports pioneer John Springman were selected as the latest honorees for the San Clemente Wall of Fame. The eighth annual—and first since 2019—induction ceremony will take place on May 14 at the San Clemente Aquatics Center in Vista Hermosa Sports Park. The event begins at 6:30 p.m. and is free to the public.

The honorees are selected each year by the Friends of San Clemente Foundation in coordination with the San Clemente Sports Wall of Fame Committee. The wall currently consists of 24 world and national champions, Olympians, professional or exceptional athletes, coaches, mentors and inspiring contributors to recreational programs that were either born, went to school or achieved their distinctions while living in San Clemente.

Before becoming the winningest high school basketball coach in California state history, Gary McKnight was a San Clemente Triton. McKnight’s family moved to San Clemente, where he began school as a freshman at San Clemente High School and graduated in 1971. McKnight played football and baseball for the Tritons.

McKnight began coaching at Mater Dei High School in Santa Ana in 1983, and since then, he and the Monarchs have soared to unreachable heights. McKnight has an overall record of 1,214-127 as head coach of Mater Dei, which is the most wins in California history and the fourth-most all-time nationally. McKnight’s Monarchs have won a national title in 2014, 11 state championships, 16 Southern California regional championships, 23 CIF-SS championships and 39 Trinity League championships, with 34 consecutive league titles from 1989-2022.

Brandi Cumin Baksic is one of the most well-rounded inductees to the Wall of Fame. Cumin Baksic has been representing San Clemente in athletic competitions for nearly her entire life. She began swimming with the San Clemente Aquatic Team at 8 years old and eventually swam as a Triton at SCHS. Cumin Baksic played club volleyball at 13 years old and earned a full-ride scholarship out of SCHS to Florida State University. She went on to become a firefighter 25 years ago and works in Torrance.

At age 30 while still looking for an outlet for her competitive energies, Cumin Baksic turned to running, biking and swimming and took part in Sprint Olympic Competitive Triathlons. She placed sixth in the world in the 2007 Olympic Distance Triathlon for Team USA. Cumin Baksic continued on this path to a ninth-place finish in the 2009 World Championship Hawaiian Ironman. She has gone on into stand-up paddleboarding and canoeing, where she has become a three-time international SUP champion and a four-time US outrigger canoe champion with Dana Point Outrigger Canoe Club.

Anyone who was involved in San Clemente youth athletics in the ‘60s and ‘70s will know John Springman, who will be inducted posthumously. Springman was responsible for the building of Vista Bahia Little League Stadium and the building of the high school’s baseball dugouts. Springman initiated and coached Pop Warner football in San Clemente. He also coached Little League and Babe Ruth League baseball. Springman also funded, started and coached American Legion baseball. Springman is credited with inspiring several athletes in San Clemente, including Wall of Fame inductees McKnight and Sue Enquist, the winningest college softball coach ever and an inaugural inductee to the wall.