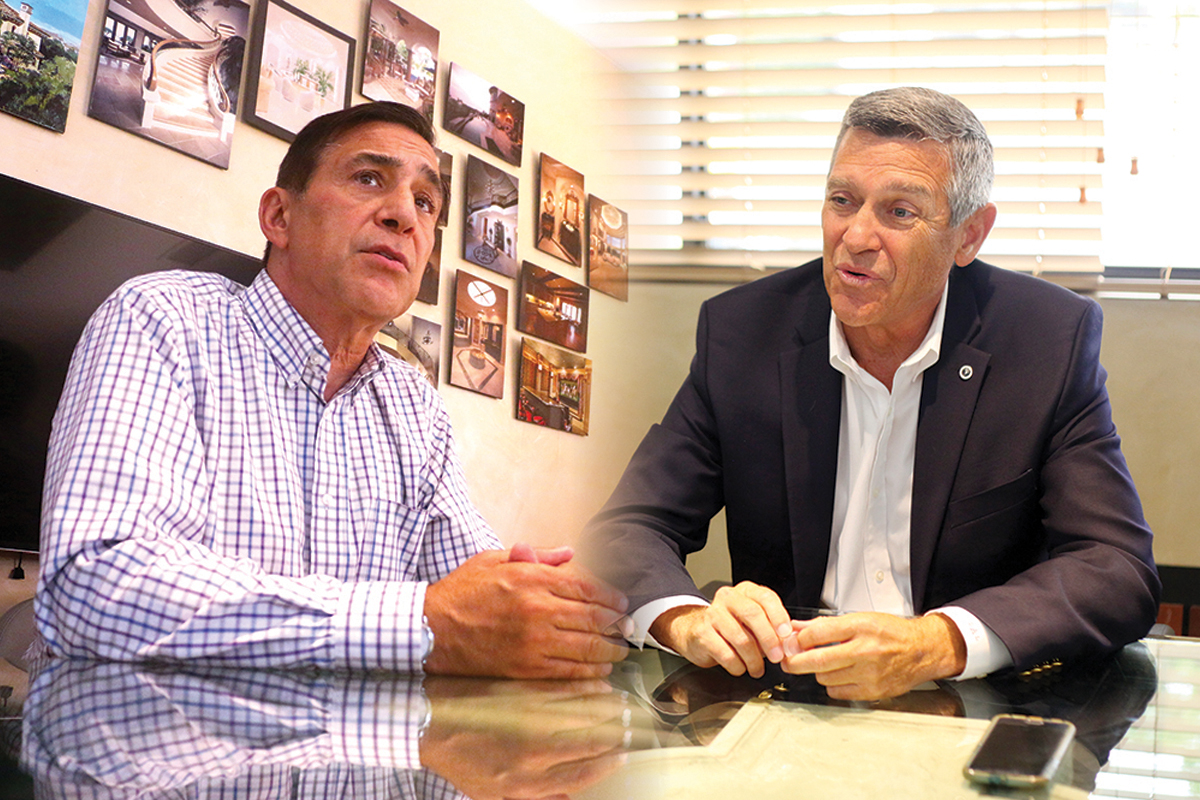 If polling and primary results are reliable indicators, the race for the U.S. Representative for California’s 49th Congressional District is the tightest it’s been in over 15 years.

The 49th spans from South Orange County to North San Diego County, including Camp Pendleton, Dana Point, San Clemente and San Juan Capistrano. Congressman Darrell Issa (R-Vista) has served as the district’s representative since 2000*, winning eight elections—all but one by more than 20 percent.

This year brings a new challenger in Doug Applegate, a retired Marine colonel and lawyer, who has lived in San Clemente since 1981. The two were separated by just over 5 percent in California’s primary voting. Some recent polls have the race closer than that margin.

San Clemente Times sat down with the candidates for over an hour each at our office to discuss federal issues, local concerns and the race itself. In our print edition, we’ve included our discussions about several key issues, but our conversations included points on immigration, water security, the military, marijuana legalization, gun control, SONGS and more.

Click to view the full transcripts of our conversations with Congressman Issa and Mr. Applegate.

ON THE CONGRESSIONAL RACE

SC Times asked Congressman Issa if changing demographics in Orange County might affect voting in the district, and how, after serving the district for nearly two decades, he might “compromise with (his) constituents when maybe (he has) something they’re not expecting from (him).”

“I didn’t plan on being here 16 years,” Issa said, “but 9/11 happened and something else happened, and instead of going back to my business career, I’ve stayed with doing what I’m doing. Now I’m very involved in some things that I want to get done, and I’m asking the district to consider are they better off with somebody with my experience and the things that I plan to accomplish, and I’m hoping they say, ‘Yes.’

“Sixteen years ago all I had to do was sharpen up my voting card and show up. Today, I’m in a position to get patent reform, to get immigration reform, I’m in the right committees and senior enough,” he said.

SC Times asked Applegate why he wanted to run for Congress, his first quest for elected office.

“I was concerned about the leadership in Congress because every time I hear somebody talking about the use of military force or combat operations, I’m hearing somebody talk that’s never really seen the trials and realities and the fog of war,” Applegate said, adding that according to his calculations, only about 5 percent of Congress members have “served in a combat zone ever in their lives.”

Applegate said he believes “South Orange County might decide the Congressional race.” Acknowledging the area’s historic political bent to the right, Applegate says he tells questioning Republicans, “You’re going to be able to get through my office door if I’m elected to Congress a lot easier than you’ve ever been able to talk to Congressman Issa. And then I can usually say, ‘Have you ever been inside his office?’ I haven’t met too many people who have. Actually, I’ve met no one who’s been in there.”

On Applegate, Issa says he knows “not much” about the Democrat, and had only met him once.

With the proliferation of sober living facilities—homes, often in residential areas, that serve as alcohol and drug abuse recovery centers—local municipalities are hamstrung to enact regulations on them, as the Americans with Disabilities Act (ADA) protects people in recovery.

Issa said the first step of any solution would be to look objectively at sober living facilities.

“Well I think what we do is we maintain you can’t discriminate based on somebody being handicapped, including being a recovering alcoholic or recovering drug abuser, but we recognize that cities should have the ability to take care of health and sanitation,” Issa said. “… These are places where somebody is charging money or billing the county or the federal government, and they’re making a profit on it, in most cases.”

Both Issa and Applegate said there could be a solution in amending the ADA to include reasonable regulations on sober living homes.

“You have to figure out something that still honors the intent (of the ADA), because I believe in the ADA, there’s nothing in the ADA that I find problematic, but it’s in its application in residential neighborhoods like (in South Orange County), it’s a problem,” Applegate said.

Applegate added that continued litigation against operators or restrictive municipal laws will only incur fruitless lawsuits, and without amending the ADA, “sober living facilities have complete leverage.”

As climate change is poised to affect South Orange County in myriad ways from rising sea levels to wildfires to water shortages, the candidates were asked various questions about the environment and the impact of human activity on a rapidly warming planet.

“I come from the party that believes in science, so this is kind of easy for me,” Applegate said, adding that the U.S. Navy and Marines have been pushing Congress for ten years to invest in renewable energy as a matter of military expediency.

Applegate said the U.S. “should have a Manhattan-type project with renewable fuels.

“And guess what? This part of Southern California has all these natural synergies in research for so many things,” Applegate continued. “It’s stupid that our Congressmen haven’t been pounding the table on that. … If you think this is some grand liberal conspiracy or whatever, it’s not. This is a real issue.

“I don’t know why a guy that had an electronics firm and likes to portray himself as at the cutting edge of technology, why he can’t see science in other areas,” Applegate said of Issa.

Issa said he “reject(s) anyone wanting to say I’m not an environmentalist.”

Issa received a zero percent rating from the League of Conservation Voters last year, a nonprofit that grades members of Congress based on how they vote on what they classify as bills that concern the environment.

Issa said he supports “more research,” “intelligent ways to reduce our carbon footprint,” and nuclear energy “because it has zero emissions and it can be an interim path.

“Do we try to have an intelligent pathway, regardless of what the timeline is—and there is disagreement on the timeline within the science community?” Issa said. “Do we kind of find a way to get as quick as possible to sustainable ecology, including weaning ourself off burning things that come from the ground? Absolutely.”

As for a concrete timeline to implementing such initiatives, Issa said, “There’s nothing concrete in environmental scientists who have missed their timelines for things they said were going to happen.”

Colonel Doug Applegate served 32 years in the Marine Corps, and has lived in San Clemente since 1981. He is also a civil trial attorney. Applegate claims career accolades of having “advised Marine commanders, defended and prosecuted war crimes, and conducted complex civil and criminal trials.”

This is Applegate’s first foray into running for elected office, however, he says he hopes his experience in the military and in the law profession will be enough to convince voters of his readiness.

“As far as my experience level, procedural rules I’ll have to get up to speed on, but that isn’t the first I’ve had to do that because I’m a member of the bar in five states, so I’m used to getting used to new rules,” Applegate said. “But I don’t have any learning curve concerning the military, foreign affairs, particularly in certain parts of the world, or the criminal justice system, the civil justice system or the penal system.”

Applegate’s platform includes reform of mandatory sentencing laws, a path to citizenship for undocumented immigrants and increased regulation of the financial sector. He would also call for a second look at the Trans-Pacific Partnership, retooling Veterans’ Affairs and protecting Medicare and Social Security.

A former member of the U.S. Army and businessman, Issa has served numerous roles in his 16 years in Congress, currently serving on the House Judiciary Committee and the House Foreign Affairs Committee.

Issa lays claim to having played integral parts in several matters of national and state importance. He touts voting against “bailing out” banks via the Troubled Assets Relief Program (TARP) in 2008, and in 2009, initiated a later-approved movement to create a bipartisan commission to investigate the “root causes of the financial crises.”

In 2012, Issa launched an investigation into the 2012 attack on the U.S. Embassy in Benghazi. As member and chairman of the House Oversight and Government Reform Committee, Issa led investigations involving Fannie Mae and Freddie Mac, ACORN and the “politicization of science at the Environmental Protection Agency.”

The richest member of Congress, according to filing data compiled by the Center for Responsive Politics, Issa earned much of his wealth as CEO and founder of Directed Electronics, which notably, manufactured anti-theft devices for automobiles. Issa’s current total assets, according to 2015 filings, ranges from $299 million to $768 million—filings only require officials to select broad monetary ranges of financial holdings.