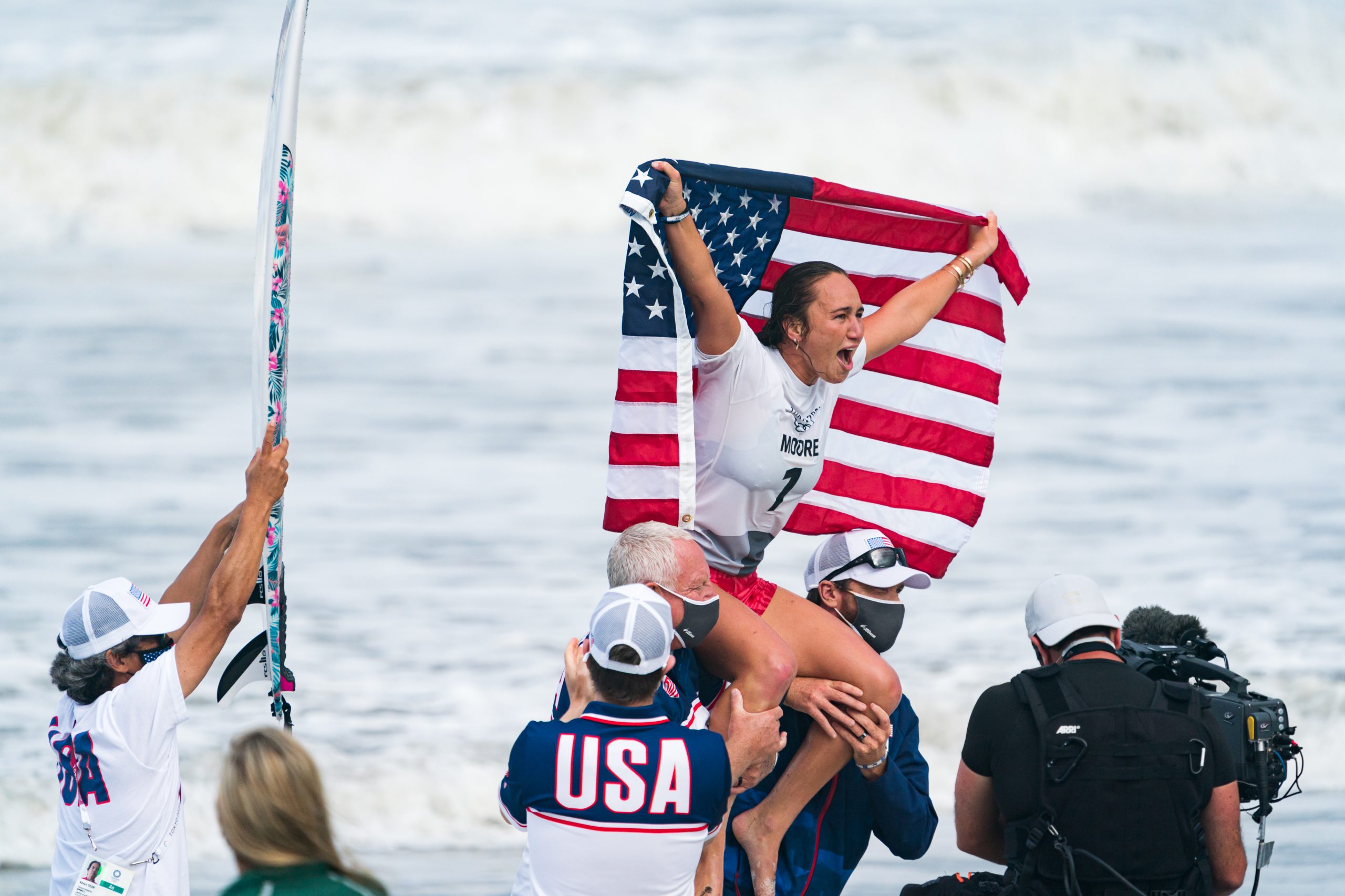 With a pulsing typhoon swell and the world watching, the United States’ Carissa Moore and Brazil’s Italo Ferreira have become the first-ever Olympic Surfing gold medalists.

After three straight days of heated competition featuring 40 of the world’s most elite surfers from around the globe, they fought their way to the top of the podium and made plenty of history along the way.

For Moore, the moment is the culmination of a lifetime in the competitive arena. With four world titles to her credit, and potentially a fifth coming this September at the Rip Curl WSL Finals at Lower Trestles, the gold medal solidifies her place as one of the greatest competitive surfers of all time. Growing up in Hawaii, winning multiple NSSA National Titles at Lowers as a kid, by the time she was old enough to drive the question wasn’t if she’d make a successful transition to the world’s stage, but how far she could take it. Turns out, pretty far.

Trusting her beautifully shaped boards by San Clemente’s Matt Biolos, the 28-year-old blitzed through every heat of the Olympic competition. A clear favorite from start to finish, when finals day arrived with pumping, albeit mixed-up, typhoon swell, Moore was in perfect rhythm. In the final, she faced seasoned veteran Bianca Buitendag of South Africa.

“The scale of this event felt so much bigger,” Moore said afterward. “Getting to share the sport with so many people that maybe have never even watched surfing was super special. As a Hawaiian, just seeing Duke Kahanamoku’s dream come true to have surfing in the Olympics is super special. It’s a big time for surfing to be recognized on this level.”

For Ferreira, the moment couldn’t have been scripted for TV any better. Growing up the son of a fisherman in Baía Formosa, Brazil, he first learned to surf on the lid of his father’s styrofoam cooler. His raw talent was noticed by Luiz “Pinga” Campos, who has discovered and managed a number of top-tier Brazilian surfers over the years, including world champion Adriano de Souza and Jadson Andre. Pinga brought Ferreira to San Clemente shaper Timmy Patterson when he was only 12 years old. They’ve been working together ever since.

In 2019, Ferreira won the world title and has become widely known as “the people’s champ.” And now, with a gold medal, Ferreira has taken his act to a completely different level.

“All surfers made history here. Every surfer has a piece of this gold medal,” Ferreira said. “This has been quite a story for me. I started surfing on a cooler top when I was a kid, before I got my first real board and won my first event. Because of [my upbringing], I have a lot of passion for the sport. I truly believe that the Olympics will change our lives. Not just the medalists, but for all the surfers that competed in this historic event.”

Local surfers Kolohe Andino and Caroline Marks were in the mix on finals day and made a solid run at the podium. Andino looked tack-sharp throughout the competition but found himself on the losing end of a hard-fought quarterfinal battle against Japan’s Kanoa Igarashi, who ultimately finished the Games with a silver medal.

Marks had a shot at the bronze medal, but like Andino, found herself tripped up by a Japanese surfer, Amuro Tsuzuki. Marks, who is only 19 years old, is sure to have more Olympic opportunities, as the 2024 Games will be held at Teahupoo in Tahiti, then in 2028, they land in Los Angeles.

Overall, Surfing’s Olympic debut has to be considered an overwhelming success. In Moore and Ferreira, we have gold medals who serve as incredible ambassadors for the sport. And with surfing now even more present on the world’s stage, the opportunities for future generations are wide open.

“I hope that the stoke and joy of our sport resonates around the world and shows people how sport can be used to make positive social change,” said ISA President Fernando Aguerre, who has been the primary mover behind surfing’s elevation to the Olympics over more than the past decade.

“This moment was one big step in our mission to make the world a better place through surfing,” he added.