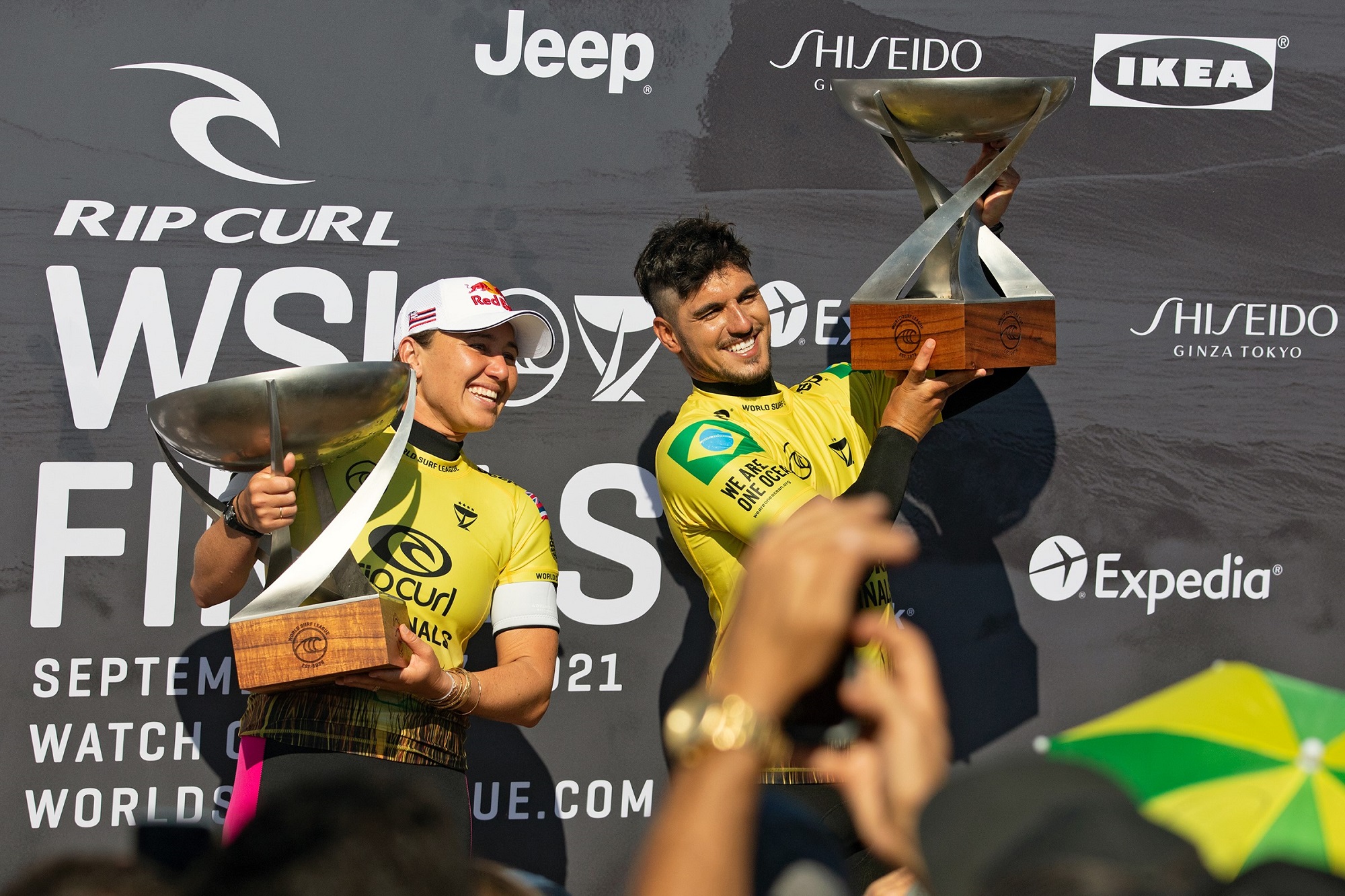 In what might have been the most intense, pressure-filled day of competition to ever go down at Lower Trestles, Hawaii’s Carissa Moore and Brazil’s Gabriel Medina captured the inaugural Rip Curl WSL Finals to claim the 2021 women’s and men’s world titles.

For Moore, the victory caps off one of the most brilliant competitive seasons in surf history. After dominating the WSL’s Championship Tour all season, Moore also became surfing’s first Olympic gold medalist earlier in the summer.

Coming in to the Rip Curl WSL Finals as the No. 1 seed, she put a lifetime of competing at Lowers to good use, as she beat Brazil’s Tatiana Weston-Webb in the final to claim her fifth world title. The accomplishment puts her only two titles away from the women’s record of seven, shared by Australians Layne Beachley and Stephanie Gilmore.

“It was a long year, and it was a very long day,” said Moore afterward. “Today didn’t start as I expected; I had to fight my way back, so it made it a bit sweeter to win. I was about to have a meltdown after the first heat. I tried my best, surfed from my heart, and it worked out. I’ve never been in the water when winning a world title, so this is extra special. I couldn’t ask for anything more!”

Much like Moore, Medina was dominant all season. Perhaps the most clutch surfer on the Championship Tour today, even the pressure of finals day didn’t rattle him, as he carved and flew to his third world title.

For the victory, Medina joins legends Tom Curren, Andy Irons and Mick Fanning with three world titles. The only surfers with more are Mark Richards, who won four titles in the late ’70s and early ’80s, and Kelly Slater, who holds the overall record with 11 world titles.

“This was my biggest goal in surfing,” said Medina. “It’s not every day you accomplish your dream. This is a special day for me; it’s a day I’ll remember forever and tell my kids about. This year was very intense and mentally challenging, I had to work hard, have patience, and let my surf talk. I had to surf a lot to win this title!”

In what’s been dubbed by surf media as “the Brazilian Storm,” Medina faced local San Clemente resident Filipe Toledo in the final. Originally hailing from Ubatuba, São Paulo, Brazil, Toledo and his family have lived in town for a number of years, and he and his younger brother are regular fixtures in the local lineups when they’re in town.

“I’ve been really working on the process of waiting for the perfect wave,” Toledo explained after the final. “I’ve been trying to be patient, choose right, and have the confidence to go for it.”

With 6- to 8-foot surf pulsing all day, pristine, glassy conditions and a packed beach of rabid surf fans, this new WSL Finals format offered a full day of high-performance surfing, high drama, and in the end, to see the world champs crowned in San Clemente will undoubtedly inspire the next generation of local kids to shoot for the stars.

And while the WSL’s Championship Tour season has wrapped up, there’s still plenty of surf action coming up. This weekend, the Supergirl Pro lands in Oceanside. And next week, the U.S. Open kicks off in Huntington Beach.