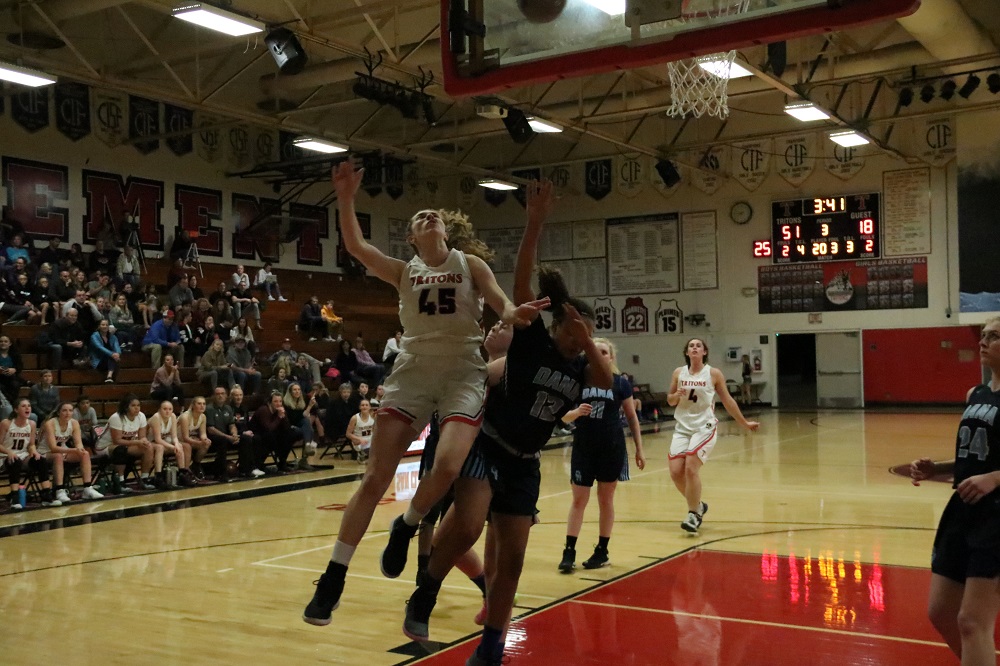 What do you get when you mix a top softball recruit, a volleyball commit, some club soccer players, track athletes and a couple lacrosse players and throw them together on a basketball court?

Apparently, you create the No. 1 girls basketball team in CIF-SS Division 2A: the San Clemente Tritons.

The Tritons are 16-4 coming off of a dominant South Coast League opening win over Dana Hills, 66-18, on Tuesday, Jan. 7, but San Clemente’s strength might just be that their best players are even better in other sports.

“I just so believe in multi-sport athletes and playing lots of sports for as long as you can,” San Clemente coach Kerri Husbands said. “I think it makes you a better well-rounded athlete on the court and a better teammate on the court. For us, because we have so many athletes, we can do so many different things out on the court. It makes it a lot of fun.”

San Clemente’s top returner was senior Ella Gardiner, who has committed for volleyball at Fairfield University. Gardiner’s height and strength is extremely valuable at the net in volleyball and filling up the net in basketball.

Gardiner continued to lead the Tritons in scoring this season, including 18 points against Dana Hills.

In San Clemente’s latest and best tournament championship run, which concluded with a victory over JSerra in the SoCal Championship title game on Dec. 18, Gardiner and junior Jessie Blaine were named to the all-tournament team.

Blaine, a transfer as part of a moving military family, comes to San Clemente as a softball commit to Auburn and the No. 1 catching prospect in the 2021 class, according to FloSoftball. Blaine has meshed well with the Tritons and adds another strong scoring option.

Sophomore Jolie Johnson has been another strength for San Clemente in dishing out assists. Senior Kennedy Hogan, Sophomores Haley and Riley Brown as well as transfer junior Kyra Stewart have all made contributions for the Tritons.

“We have a ton of energy,” Husbands said. “Everybody’s all about team. They play with a ton of heart, ton of grit. They’re just really coachable.”

San Clemente has been solid in each of Husbands’ first four years at the helm, but the Tritons looks stronger than ever and are on pace for their best win total in some time.

“I think we’re playing a high level of basketball, and we’re going to be a tough team down the stretch,” Husbands said. “I think we’ve worked hard for it (the No. 1 ranking), but we’ve got to keep it now. We’ve got to keep working toward it every single day.”

San Clemente is also looking for its first league title since splitting the South Coast League championship with Tesoro in 2015. The Tritons only lost two league games last season, both to league champion Aliso Niguel.

The Wolverines are 14-3 this season and edged out Tesoro in their league opener, 63-60, on Tuesday, Jan. 7. Aliso Niguel is slotted in Division 1 this season.

San Clemente plays at Tesoro on Thursday, Jan. 9 and hosts Trabuco Hills on Saturday, Jan. 11 before its first game against Aliso Niguel at home on Jan. 14.