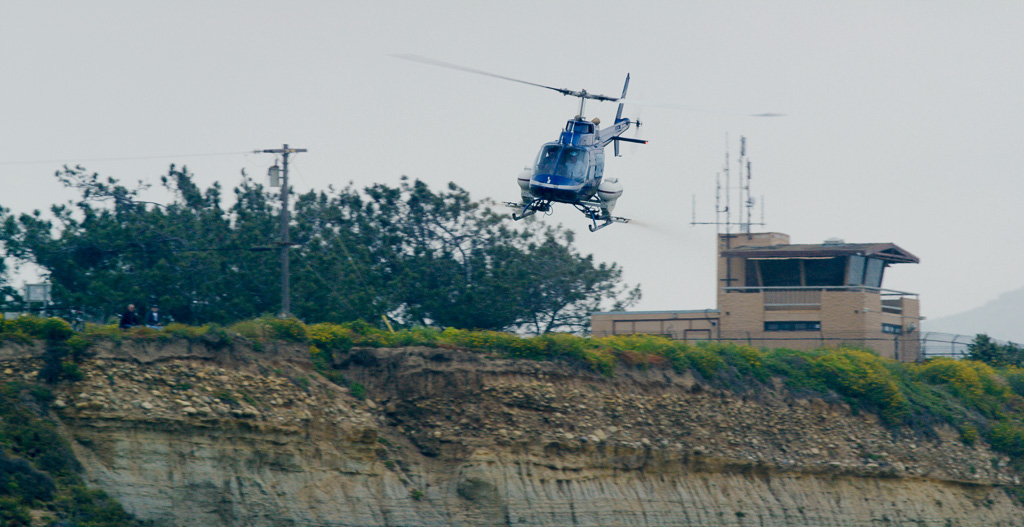 “You’d never see that going on at a Little League game; you can imagine how many outraged parents there would be. There were so many people on the beach that day, too. Great waves, sun was out, and that thing was just dumping without any warning.” —Yadin Nicol, former WSL World Tour surfer describing the events of April 19 at Lower Trestles

Surfers ran for cover when a helicopter unexpectedly started raining some kind of material on them at a popular San Clemente-adjacent wave break.

On April 19, Camp Pendleton contractors dispatched a helicopter about 11 a.m. near Lower Trestles surf area at San Onofre State Beach. Witnesses reported seeing a blue helicopter that started spraying what witnesses described as a “brown substance” that was poured over the beaches near the trails, but wind that day may have carried some of the substance into the ocean, causing it to emit an eerie smell.

What happened was described as if it was out of a political protest cartoon from the 1970s, back when surfers weren’t allowed at Trestles due to the proximity of Camp Pendleton and the home of former President Richard Nixon.

But Camp Pendleton officials said there was no malicious intent and that the substance dropped is not harmful to humans, despite witnesses decrying the optics of the incident.

According to Camp Pendleton’s 2017 Integrated Pest Management Plan, Acepex Management Corporation subcontracts Hummingbird, Inc., and according to its website, the company holds multiple contracts with the Department of Defense for such duties.

The plan stated that repellent used at the base are EPA-registered substances. Although the base does mix, spray and clean equipment with substances that are not permitted near waterways and storm drains, those substances are not part of the aerial tactics plan.

U.S. Marine Corps Capt. Luke Weaver, a public affairs official with Camp Pendleton, said the video does show a helicopter that was contracted with dropping the pellets at the surf location.

“Camp Pendleton hired a contractor to conduct West Nile mosquito abatement by dropping dry pellets of a non-toxic larvicide called VectoMax FG on stagnant water in the vicinity of San Mateo Housing and the mouth of the San Mateo Creek on April 19, 2019,” Weaver stated in his response to the San Clemente Times. “This is normal mosquito abatement that is performed several times a year on the base and across San Diego County and Orange County by a variety of municipalities. The active ingredient in VectoMax FG is a naturally occurring soil bacteria called bacillus thuringiensis israelensis (BTi).”

BTi is not known to cause “long-term effects on humans” or other non-insect species, Weaver stated, but some products containing other ingredients along with BTi can cause temporary skin and eye irritation.

A schedule of upcoming mitigation events along with more information can be found by clicking here.

“We conduct these mitigation efforts because of the dangers of West Nile virus and other mosquito-borne illnesses,” Weaver said. “West Nile virus sickened 44 people and killed six people in San Diego County in 2015 alone.” (The cited stats are from the county’s Vector Control website.)

The San Mateo housing on the base is close to the San Onofre State Beach, but Weaver said the base does not instruct contractors to drop BTi products on the beach or in the ocean.

What Was Dropped from Above on April 19?

According to the Camp Pendleton mosquito control website, the larvicide dropped in the Lower Trestles surf area was VectorMax FG pellets, which contain bacillus thuringiensis israelensis (BTi), a naturally occurring bacterium found in soils. The EPA’s website states BTi can be sprayed “over waterbodies such as ponds, lakes, rivers and streams” to kill mosquito breeding grounds.

“BTi can be used around homes in areas and containers where water can collect, such as flower pots, tires and bird baths,” the website stated. “BTi has no toxicity to people and is approved for use for pest control in organic farming operations.”

The next scheduled drop for the area is May 17. Visit Camp Pendleton’s mosquito control website for more information.

Weaver said because BTi is non-toxic and naturally occurring bacteria, the base hadn’t posted any public notices for routine mosquito abatement efforts.

“Given the concerns raised by local residents with this month’s larvicide distribution, we decided to post a schedule of planned mosquito larvicide applications on our website going forward,” Weaver said.

Although some people said the substance dropped appeared to be a liquid, Weaver said the base did not drop liquids that day.

Not knowing what kind of substance the helicopter was dropping, in addition to no warning being given, people scrambled for shelter.

“My 12-year-old son and I surf Trestles almost religiously. We were biking down with our boards around 11 a.m. (on April 19) from the state parking lot by Carl’s Jr.,” said Stephen Doan, a local attorney and real estate broker. “As we made our way down the bike trail and a little past the bridge, a blue helicopter flying very low flew over our heads. Both my son and I noticed it sprayed something brown over the estuary. We then quickly biked up the hill leading to the main Middles/Lowers dirt trail and stood and watched the helicopter make another two or three passes over the estuary around the Middles area, spraying a brown substance.”

Doan said neither he nor his son had smelled anything quite like it.

“I did see a few surfers sitting on their bikes on the shore with their shirts covering their mouths as they checked the surf,” he said. “I was a bit surprised they would spray late morning with lots of (people) around.”

Doan said he surfs the area about three to four times per week at all different times and had never seen the area sprayed from a helicopter.
Former WSL World Tour surfer Yadin Nicol was also in the area with his son and became concerned when the helicopter flew nearby. From afar, it appeared the pellets were some kind of liquid, but this was dismissed by Camp Pendleton officials.

“The VectoMax FG pellets do dissolve after being immersed in water, which may have been the cause of the confusion,” Weaver said.

Nicol he said he has seen mosquito repellent dropped by helicopters before in the area, but not during midday and not that close to the ocean waters. Standing water on the shore that has collected following spring rains may have caused a recent increase in the vector’s population.

“There is a problem with mosquitos down there, but I don’t know if that was the time and place. If it’s harmless, it’s harmless; but I don’t want that dropped on (the beach),” Nicol said. “My son was with me. I just put a towel on his head and ran out the back, because I didn’t know what it was.”

Nicol said he didn’t have any symptoms after smelling the substance, but without warning, it left bystanders guessing.

“You’d never see that going on at a Little League game; you can imagine how many outraged parents there would be,” Nicol said. “There were so many people on the beach that day, too. Great waves, sun was out, and that thing was just dumping without any warning.”