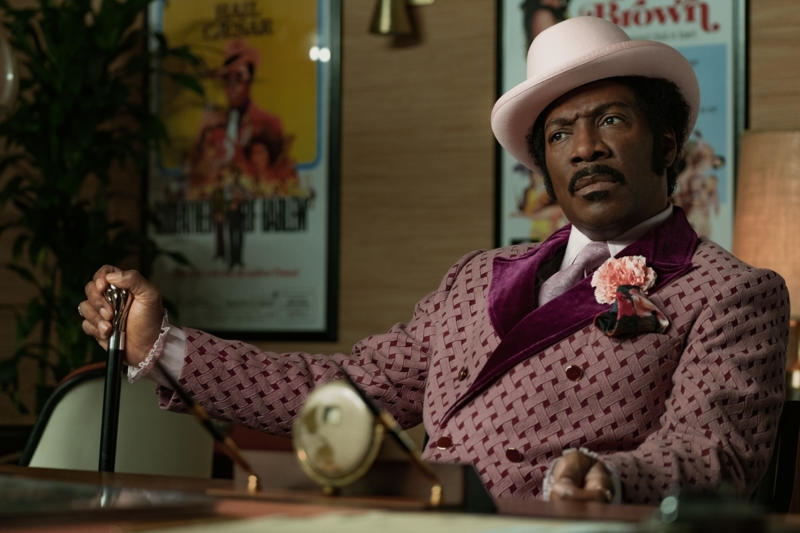 At the Movies: ‘Dolemite is My Name’ and Then Some

While folks at Netflix still pride themselves on being pioneers of online streaming for movie viewing, they are also finally seeing that to get support from avid film fans, they need to put their films on the big screen. Movies such as Roma (2018), The Irishman (2019) and currently the light-hearted biopic, Dolemite is My Name, get these traditional releases because of high potential and hype with the production teams.

In the mid-1970s, Rudy Ray Moore (Eddie Murphy) is struggling to get a career going after failing with forays into the music industry and the nightclub life. He’s about ready to give up until he is suddenly inspired to form a stand-up comedy act and sells his own records independently because none of the record labels will promote uncensored material. Rudy thinks he has enough material and influence to pen his own feature film based on his stage persona known as “Dolemite.”

Murphy, who will randomly show up about once every decade to deliver a great performance, reminds viewers that he’s still a comedy lead icon. He not only does justice to the man the film is based on, he also tastefully puts his own spin on the entertainer. Dolemite director Craig Brewer exhibits the right amount of flair and restriction to not let the tone and atmosphere come across as a farce. Scott Alexander and Larry Karaszewski are the same writing team that wrote Tim Burton’s Ed Wood (1994) and Milos Forman’s The People vs. Larry Flynt (1996), and here it feels like the perfect blend of both movies, yet still has its own identity. Dolemite is a worthy spiritual companion piece to Baadasssss! (2003) and also picks up where The Disaster Artist (2017) was lacking.