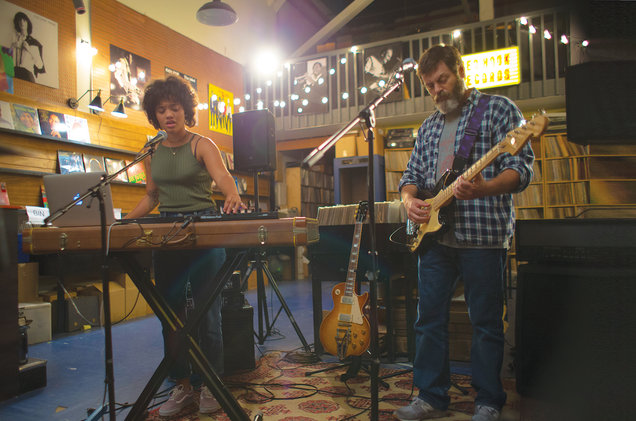 At the Movies: ‘Hearts Beat Loud’ Has a Little Something for Everyone

It feels like it’s been a while since we’ve had a good father-daughter story in movie theaters. Father of the Bride (1950 and 1991), To Kill a Mockingbird (1962), Paper Moon (1973) and the more recent The Descendents (2011) are some of the best received films about a young girl and her dad. The Incredibles 2 did have some nice moments between Bob and Violet, but the CGI sequel was primarily a family ensemble. Indie filmmaker Brett Haley’s new dramedy Hearts Beat Loud has a little something for everyone.

In modern-day New York City, Frank Fisher (Nick Offerman) runs his own record shop below his apartment he shares with his teenage daughter, Sam (Kiersey Clemons). Sam’s spending her summer by taking a course before college at UCLA. Frank and Sam sometimes spend time together jamming in their music room. When Frank thinks their latest song is their best yet, he uploads it to Spotify and the track gets popular overnight. Toni Collette and Sasha Lane co-star as Frank’s and Sam’s love interests, respectively.

The title Hearts Beat Loud comes from the name of the song Frank and Sam made together. Haley’s film is a story for families and rock music lovers, both young and older for the latter. Sam is reluctant to spend time making music with Frank because she thinks he’s just trying to relive his younger band days, and she’s also still a teen who doesn’t want to socialize with her dad. It’s a universal theme that everyone recognizes and is done well enough for a 90-minute flick.