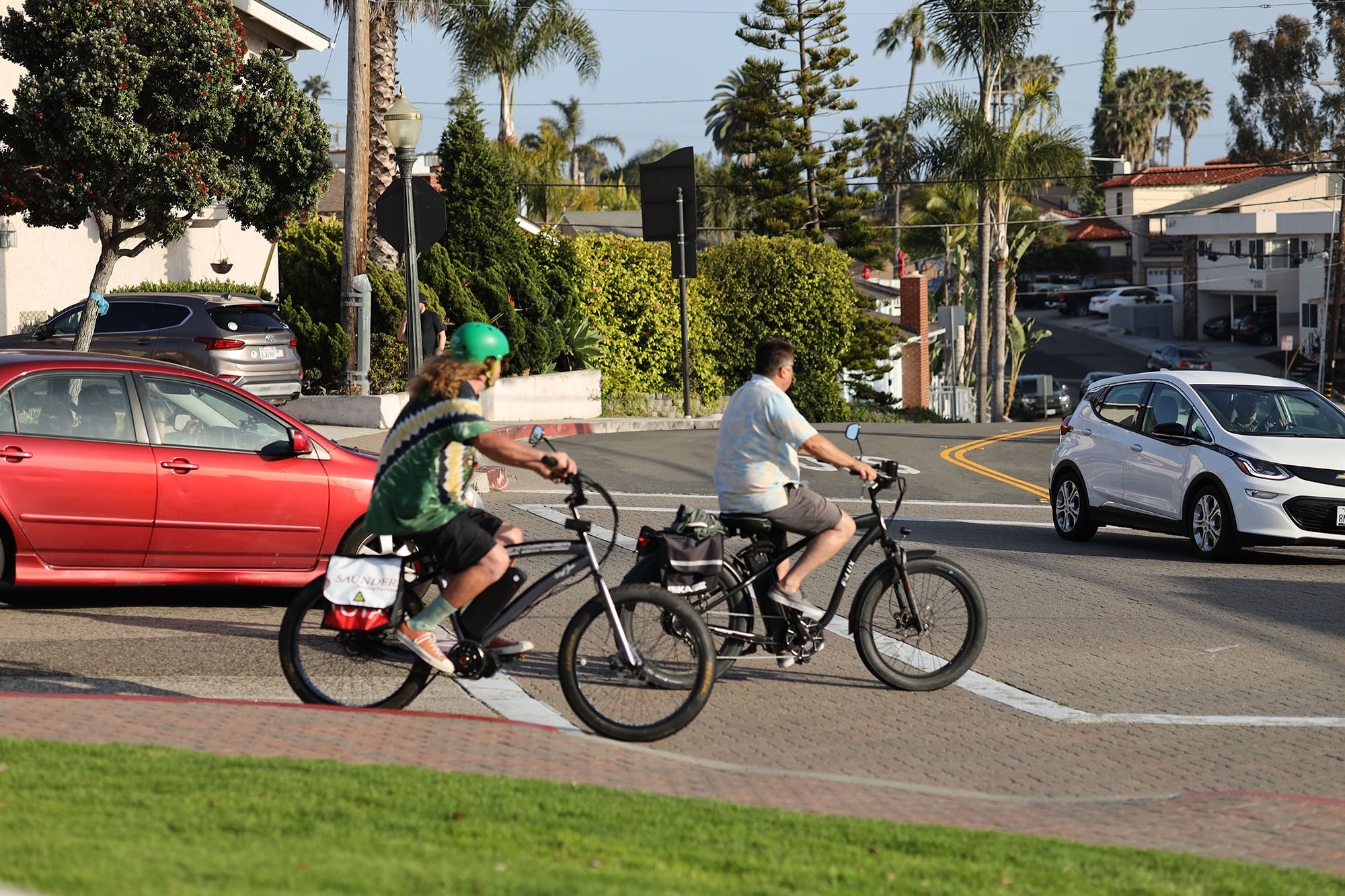 As electric bikes rise in popularity, local state and city leaders, the Orange County Sheriff’s Department, along with school resource officers, are emphasizing an education-first approach to addressing community concerns of reckless ridership.

In San Juan Capistrano, the city’s Police Services is working with school resource officers to develop a program requiring kids to verify that they’re wearing their helmets and riding an age-appropriate bike.

And in Dana Point, Mayor Joe Muller is spearheading a proposed program that looks to require kids 16 and younger to complete an e-bike safety course.

The ongoing education efforts come as the City of San Clemente’s e-bike ban on beaches, the Beach Trail, and the Municipal Pier recently went into effect.

When reached for comment on the latest details of the ban, San Clemente Assistant to the City Manager Jennifer Savage wrote in an email that the city has focused primarily on education, with enforcement beginning Memorial Day weekend.

The city on Thursday, May 27, is looking to further promote such education and safe riding by hosing another Bike Safety Rodeo for children 5 and older at the Vista Hermosa Sports Park.

“It’s really about education,” Davies said. “I mean, this is a great way for kids to get around; it’s getting them out of the house, away from the video games, getting exercise, being able to be around others.”

Municipalities began to notice that a lack of education and awareness of rules on e-bikes arose during the COVID-19 pandemic—when e-bikes continued to rise in popularity.

Incident data obtained from the Orange County Fire Authority show that there have been 84 e-bike-related incidents within its contract cities since 2021, when the agency started tracking such information.

As public safety officials saw accidents increase, Davies said she realized the problem was rooted in a lack of education.

To address concerns in Dana Point, Muller has proposed a program, which he brought up during the Dana Point City Council’s May 3 meeting, that would require e-bike riders under 16 in the city to show proof of completing a safety course if pulled over by law enforcement.

Muller said that the overall problem of reckless riding likely won’t get any better until kids and parents start seeing consequences.

“If we are able to make it mandatory, and parents start seeing—off the top of my head, this is totally off the wall—if we were to confiscate a bike, and they had to come back and pay a fine to get it . . . $500, $1,000 . . . that’s going to actually send a warning signal, get the kids in this class,” Muller said. “The classes, right now, they’re free. It’s a Saturday morning for a couple hours. Go through it, answer some questions, and get your certificate. I think it’s worth doing.”

Ideally, he added, he’d like legislation to be passed at the state level with a program similar to how California law requires all boaters to complete a safety exam and carry a California Boater Card.

In late April, the Assembly voted unanimously to pass Davies’ legislation, Assembly Bill 2028. The measure amends existing law that authorizes school districts to partner with law enforcement and public agencies to provide bike safety education by revising the list of vehicles to also include e-bikes, motorized bikes and motorized scooters.

“We want to be able to make sure that everybody’s educated, and now that, hopefully, this bill will go through, we can work together with our partners at (the Orange County Transit Authority). They’ve been fantastic, along with law enforcement, our schools and our parents,” Davies said.

The measure is now over at the State Senate, where it awaits an Education Committee hearing on June 8. In the meantime, Davies has encouraged local jurisdictions to develop their own programs.

“Sometimes, we get a little tunnel vision in our own world here in our cities,” Muller said at the May 14 bike safety event. “(Davies) said you need to start talking to other cities, San Clemente, San Juan; make it consistent around South County, countywide.”

Though Muller hopes to require kids younger than 16 to undergo an e-bike safety class and receive a certification, he is not in favor of requiring a license to operate e-bikes.

“It’s really more, making sure that parents understand that this is an important class,” he said. “You need to make sure your kids take it if you give them an e-bike.”

He added that he’s not sure yet what the penalty would be for not completing the safety program, whether there would be impounding of bicycles, what the grace period would look like to start, or even if he had the votes on his council to pass it.

“It’s just a discussion we’re having; we’ll probably put it on one of our June meetings, maybe July,” Muller said. “I’ve thought a lot about this; it’s the No. 1 complaint I get in the city.”

Rafael Reynosa, a public information officer for California Highway Patrol, said that it would be difficult to get all kids riding e-bikes under 16 to complete a safety course, but that “if we have some joint effort between the state, county, local municipalities, I think it can be done.”

Reynosa added that since e-bikes are relatively new, CHP has focused primarily on educating riders.

“We’re trying to focus more on education over giving them a citation, but when we see them, officers—and I’m sure deputies do as well—we stop them, educate them, tell them they can’t be doing this, whether they’re going too fast or riding without a helmet or riding with passengers when they’re not supposed to,” Reynosa said.

Passengers are not allowed on any bike unless it is a tandem bike or has a built-in seat.

Doheny Bike owner Jason Spates said he’s not in favor of a licensing or registration, but he agreed that the problem with reckless riders lies in a lack of education.

“There’s a lot of negligent circumstances where you see kids in turning lanes and things like that, and you wonder who’s telling you how to respect the right of way, the rules of the road, stay off the sidewalk, don’t be going 30 miles an hour when pedestrians are around,” Spates said. “Very common-sense things.”

“I don’t know if registering the e-bikes would regulate that, but there may be a way to get in contact more with parents and maintain that relationship with the adults, so that it eventually helps to solve problems before we have problems,” Spates continued.

Spates said Doheny Bike does not sell e-bikes to kids under 16.

“We, as a company, don’t cater to young riders of our bikes,” Spates said. “We ask that riders be 16 years of age.”

He added that most of his clientele are older, using the bikes for mobility.

In reference to San Clemente’s ordinance restricting e-bikes on the Beach Trail, Spates said the city needed to address concerns of reckless e-bike riders without an all-out ban.

“We don’t want to go the way of San Clemente, where they start restricting access and mobility of the bikes,” Spates said.

Earlier this year, San Clemente City Council passed an ordinance prohibiting electric bicycles on the beach, Beach Trail, and the Municipal Pier. Enforcement of the ban will require a coordinated effort from the city’s Beaches, Parks, and Recreation Department, Park Rangers, Code Enforcement and Marine Safety, as well as OCSD.

Doheny Bike has offered helmet giveaways in order to promote safe riding and the importance of wearing a helmet.

“I think we should go by county, because one size doesn’t always fit all,” Davies said. “But what we need to do is we need to work together with OCTA, who does a lot of great bike safety. We need parents there, because we need to educate them as well.”

Dana Point School Resources Deputy Joy MacDonald is primarily assigned to Dana Hills High, as well as some of the elementary schools and private schools in the area. As e-bikes have boomed in popularity, OCSD has stressed bike safety education, holding information sessions and bike and e-bike rodeos.

“They’ve just grown so popular so quickly, so we’re kind of playing catch-up, but we’ve done what we can to put the education out there,” MacDonald said. “We definitely follow a model of education before enforcement, but at the end of the day, we need to make sure that people are staying safe and that people know the rules of the road.”

“Now, you’re giving kids these high-powered machines, and they don’t know the rules of the road,” MacDonald added. “Although it is a great thing to have and it’s a great resource, ultimately, they still need to be held accountable to making sure that they’re safe and others are safe.”

MacDonald also discussed some of the trends she’s seen with e-bike riders.

“A lot of that is riding on the right side of the road, in the same direction as traffic, and using your hand signals and making eye contact when you approach intersections,” MacDonald continued. “A lot of times, otherwise, they’ll just kind of blow through intersections or make turns, and it startles cars, and that can cause accidents.”

She added that it’s important to always wear a helmet and make sure to wear reflective clothing when riding at night.

“Lastly, one thing that we’ve been dealing with at the high school that’s really caused some problems, there’s these new electric dirt bikes that came out, and you actually need an M1 motorcycle license to ride them,” MacDonald said. “So, you go to these bike shops and you see all these cool bikes, and you go, ‘Oh, I want that one,’ but you want to make sure you know what kind of bike you’re buying.”

Class 3 e-bikes, which are also pedal-assisted but do not have a throttle, stop providing motor assistance when the bike reaches 28 mph. Kids under 16 are not allowed to ride Class 3 e-bikes.

San Juan Capistrano Police Services noted that it has seen kids under 16 illegally riding a Class 3 e-bike to school. Officers noted at the bike safety event that their plan is to promote education first over the summer, make sure kids are riding safely and enforce as needed.

They also discussed a program in development, in coordination with school resource officers, that would require kids to have their bikes inspected by OCSD and receive an educational pamphlet on the rules of the road in order to park their bikes on campus. The inspection would also ensure that kids under 16 are not riding Class 3 e-bikes.

The police services hope to have this program running by next school year.