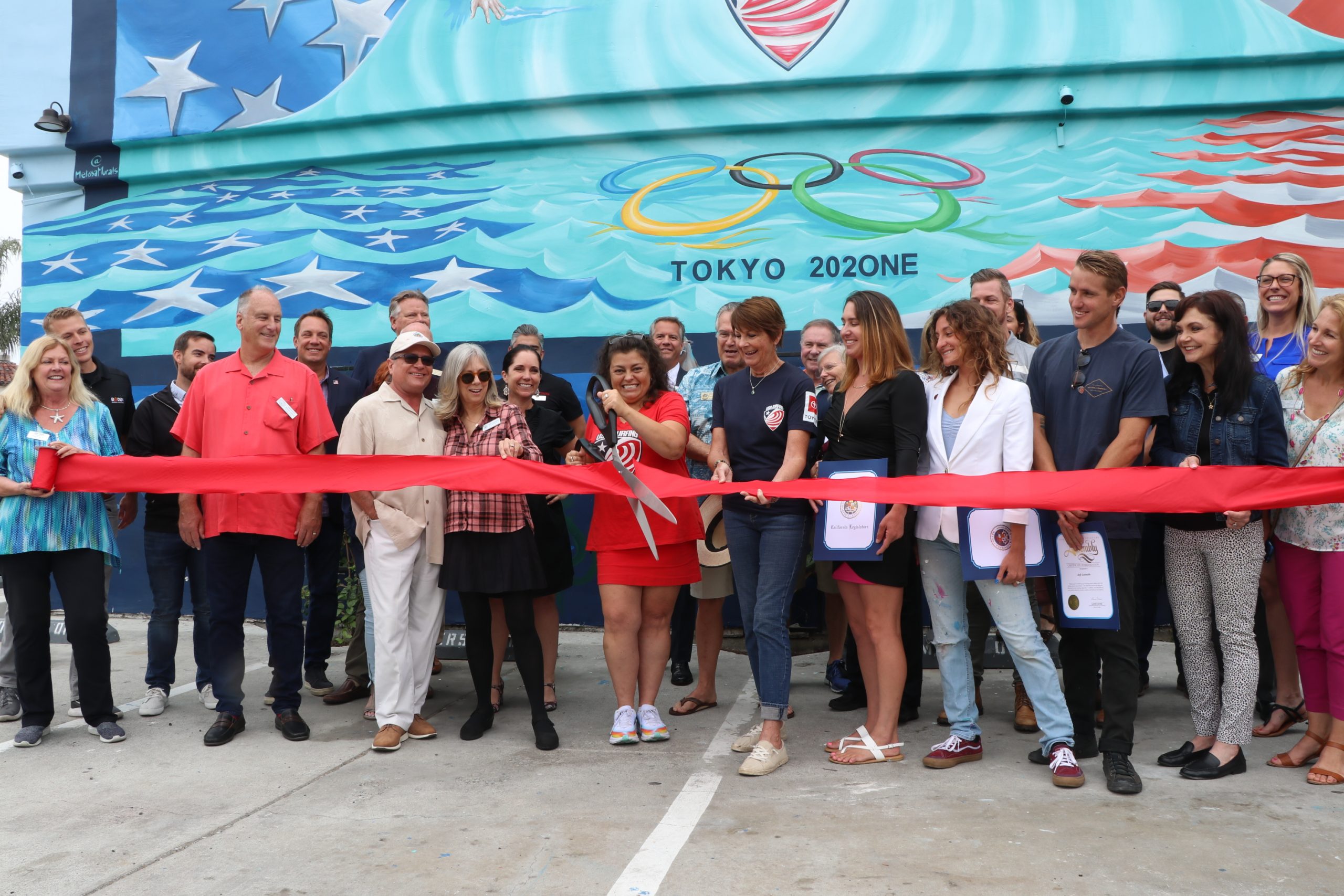 Murals Show Off San Clemente as Home to Olympic Surfing

Thanks to a contentious trademark war, San Clemente won’t be holding the title of “Surf City, USA” any time soon. But Sergio Prince, the community relations advisor for OC Board Supervisor Lisa Bartlett, offered another potential designation: “Surf Town, USA.”

With two local surfers—hometown hero Kolohe Andino and Florida transplant Caroline Marks—set to represent half of the inaugural U.S. Olympic Surf Team in Japan later this month, San Clemente can certainly make a strong case for the title Prince had proposed. Fittingly, the new mural behind him, honoring the two local Olympians, also spoke volumes.

Prince was among a group of several San Clemente Chamber of Commerce members, elected officials and dignitaries who gathered in downtown on Tuesday, June 29, to officially unveil the series of murals the city had commissioned in partnership with USA Surfing, the national governing body for the sport.

“Everybody that lives here knows we’re a breeding ground for surfing talent—it’s no secret, we’ve got a lot of hot surfers here,” Andrea Swayne, chief operating officer for USA Surfing, boasted in front of the mural at 102 Avenida Victoria.

“We really have our hearts set on branding and celebrating San Clemente as the (Olympic) surfing city of the United States, so this (mural) project was really part of that,” she added. “We really want to celebrate that.”

Back in April, USA Surfing put out a call to artists interested in applying for the project, which at the time included only two locations in the downtown alleyway—off Victoria, on the wall of the building that houses 9 Style Sushi and the neighboring liquor store, and on Kith and Kin Boutique’s wall off Avenida Del Mar.

The hotel and restaurant that is Nomads, off Avenida Cabrillo, later asked to be part of the endeavor, opting to self-fund its mural, explained Kim Tilly, the USA Surfing administrative coordinator who oversaw the project.

Tilly had previously explained that funding for the murals—$2,500 to each artist—came from the San Clemente Downtown Business Association. Additional support, she said, also came from the city, as well as other organizations and individual donors.

Of the roughly 15 people who submitted design concepts, Tilly said, USA Surfing narrowed down the pool to four applicants, letting the owners of the buildings have the final say. Dana Martino was chosen for the Del Mar location, Melissa Murphy won her bid for the Victoria spot, and Jeff Lukasik was asked to paint the Nomads wall.

“They really were such a dream to work with,” Tilly said of the three artists, noting that they were all communicative, supportive and enjoyed working together. “It was really a fantastic collaboration.”

Murphy, who grew up surfing competitively in high school and college, previously has painted murals in Huntington Beach. On Tuesday, with her completed mural depicting Andino and Marks getting some air off a wave, Murphy said her own surfing experience inspired her to apply for the project and that she “was so excited to be involved.”

“I surf every day, and I love surfing, so this was totally a mural I really wanted to do, so I put a lot into my application painting,” she said, before gleefully explaining what she hopes the two Olympians get out of it. “Gold medals, man! Yeah, they look at this, and they win.”

Speaking in front of her mural off Del Mar, Martino said she was thrilled at the opportunity, as it allowed her to connect with the people of San Clemente—a difficult task for a relatively new resident during the pandemic.

“This project was an awesome opportunity for me to be out here. I walk on Del Mar all the time, so for me to do the mural on Del Mar was extra exciting,” she said, adding: “The variety of people and the energy I just got off everyone was amazing. That alone was the most exciting part for me—just meeting people.”

During the presentation on Martino’s mural, which shows Andino and Marks barreling through a couple of waves while an American flag appears to flow between the two, Tilly floated the idea of having a sister mural on the adjacent wall of the historic Bartlett Building.

While praising San Clemente Economic Development Officer Jonathan Lightfoot for his involvement in the project, Tilly further advocated that the new surf murals inspire the city to launch an artwalk throughout the downtown alleyway.

“That would just be such an awesome thing for San Clemente,” Tilly said.

Lukasik, who was tasked with the largest canvas, expressed relief on Tuesday that the mural project was complete, saying “it was a pretty brutal process getting it all done,” but was appreciative of Tilly for her support and bringing cookies to the artists.

“It’s been my dream to paint a big, huge, massive mural project, and it’s maybe taken a little bit longer than expected, but now that it’s all done, it’s going to be really special,” he said. “Just, hopefully, we see more of this going on.”

Having grown up in San Clemente, Lukasik has spent countless hours in the water surfing and watching Andino and Marks. The mural, highlighting the city and an incoming wave from under the historic pier, is meant to show the artist’s view from where he’s seen the two surfers grow up.

“I’ve surfed here my whole entire life, I’ve spent thousands and thousands of hours on the water, at this exact spot watching Kolohe and Caroline grow up,” Lukasik explained, joking that “if I was doing what I wanted to be doing at 16 years old, I probably would be the one getting painted up there, but my life has transitioned to painting artwork.”

Reiterating her previous comments that San Clemente is home to Olympic surfing in the U.S., Swayne said the mural project was just the beginning.

“We hope that we can celebrate more in many other ways and include not only our talented surfers but our talented artists, and local businesses, and just bring together the synergy of all our citizens here,” she said.

The Summer Olympics, which were initially scheduled to occur last year before being postponed because of the pandemic, are slated to get underway on July 23. The Games will run through Aug. 8.