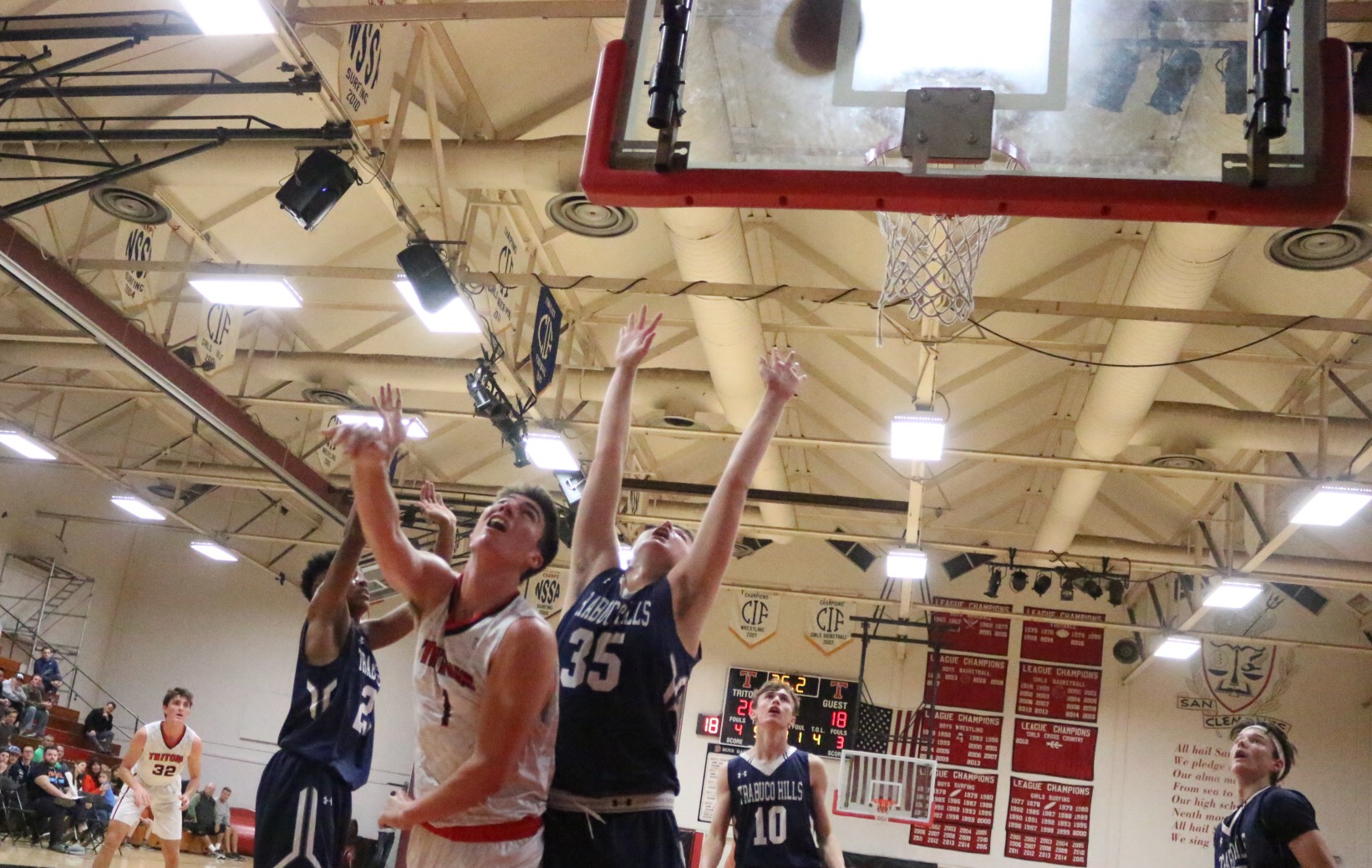 SAN CLEMENTE – The leading scorer for San Clemente’s basketball team had no points in the first half. The Tritons big men were carrying the weight, but when it came time to put the game away, Jacob Nemeth reemerged.

Nemeth scored all of his 18 points in the second half with 11 in the fourth quarter to push the San Clemente out to a bounce-back league victory over Trabuco Hills, 55-42, on Friday at San Clemente High.

San Clemente senior guard Jacob Nemeth on scoring all 18 of his points in the 2nd half with 11 in the 4th quarter to push @SCTritonHoops out to a 55-42 win over Trabuco Hills. pic.twitter.com/pe7gA70WH5

“My teammates just started finding open shots and I started hitting them,” Nemeth said. “First half, I had some open looks, but I rushed a few. Second half, I ended up getting to the rim a lot more too.”

“Extremely important to not go 0-2,” San Clemente coach Marc Popovich said. “I thought we played with desperation on the defensive end. We knew this was a big one for us, and our guys came through in spades for us defensively.”

After an even first quarter that gave San Clemente at two-point lead, 12-10, the Tritons broke a 15-all tie in the second quarter to go on a 13-3 run into halftime.

“We started pushing the ball,” Nemeth said. “We kind of slowed ourselves down in the first quarter. They couldn’t stay in front of us on the fast break.”

San Clemente was also dominant on the boards again outrebounding Trabuco Hills by an astounding 34-13 margin.

Chris Kane led the way with 11 rebounds and five points. Jay Baggs had 10 rebounds with four points, and Josh Walker had a big second quarter with seven points and five rebounds.

In the third quarter, Trabuco Hills got hot.

The Mustangs hit five 3-pointers to cut their 10-point deficit to just two into the fourth quarter.

“They’re knocking down good shots with hands in their face,” Nemeth said. “We knew that as long as we kept contesting them, they’d start missing some more. We knew if we kept executing on the offensive end, we’d be able to keep enough of a lead to pull this one out.”

Nemeth also got hot in the third quarter with an opening 3-pointer and seven points in the quarter.

In the fourth quarter, the senior guard drove the lane to earn easy baskets and free throws as well as hitting another 3-pointer. San Clemente’s defense began to prevail and Nemeth’s points kept the Tritons out front.

“He didn’t try to force stuff,” Popovich said. “He was real patient, took good shots, didn’t make any bad plays, and we ran stuff for him. That’s why we go to him in those situations.”

Next up for San Clemente in league play is a trip to Aliso Niguel on Wednesday, Jan. 17. The Wolverines are ranked No. 13 in CIF-SS Division 2AA but lost their league-opener at home against El Toro on Friday.

El Toro is the current league-leader at 2-0 and beat Trabuco Hills, ranked No. 4 in Division 2A, in their opener.