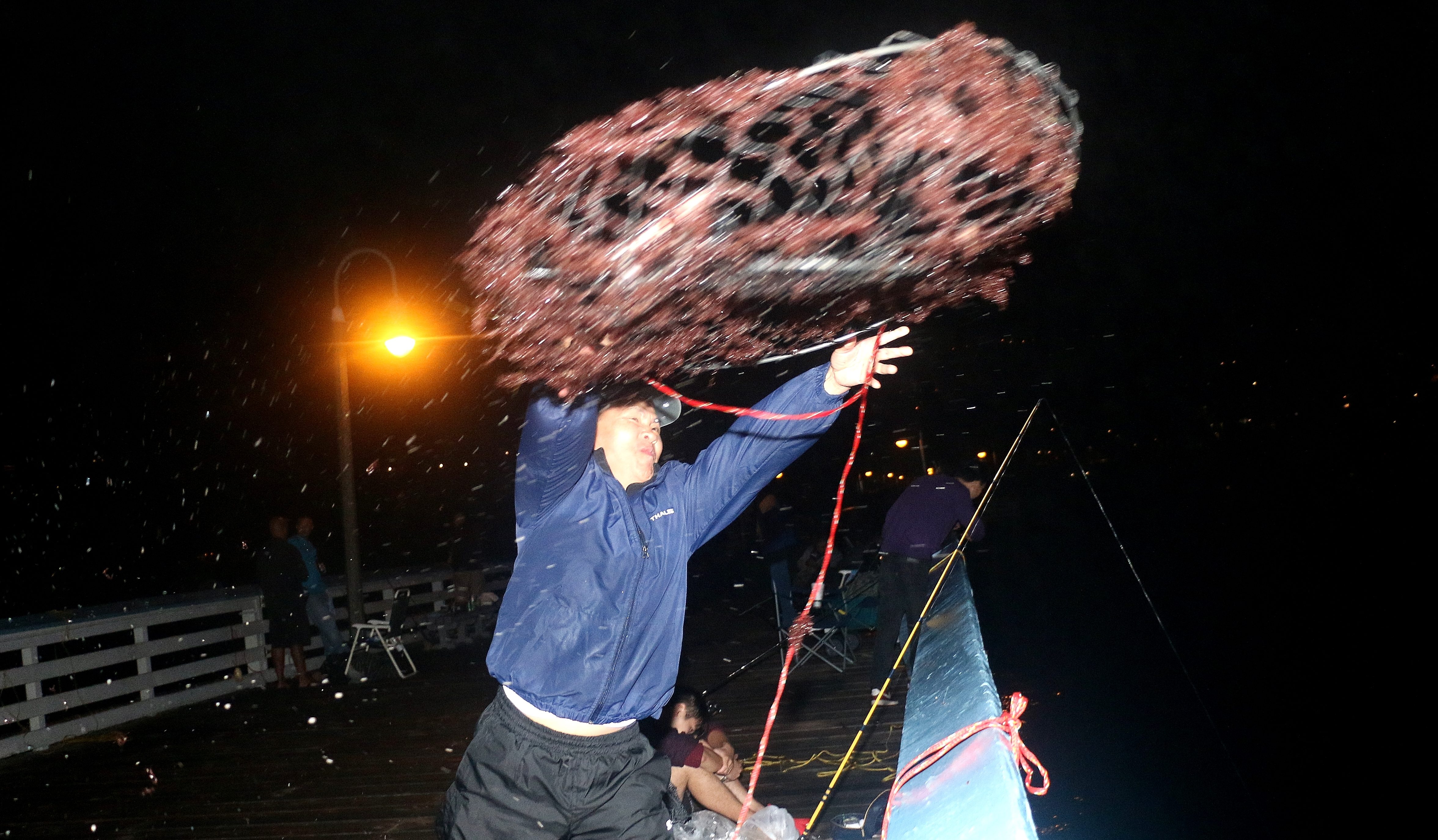 The clock struck midnight for some spiny lobsters that dwell under the San Clemente Pier, as harvesting season for the creature began last Saturday night.

The season began Oct. 1, and at least 20 people were casting traps and nets at the Pier.

Scott McLellan said he’s been coming out since 2001 and lives across the street from the Pier. He said it’s not a hard sport to get into; people can get all they need for about $50.

“The best bait that I’ve seen is mackerel,” McLellan said. “Everyone seems to have their favorite spot. It’s like a camping trip. I didn’t even know some of these guys, I just met them tonight. I’m from San Clemente, they’re from Long Beach, but I’ve been hanging out with them, and it’s been a fun night.”

Don Zhou said this was his first time participating in spiny lobster fishing.

“It’s fun to hang out with friends out here, and hopefully we have something to eat for tomorrow,” Zhou said. “We heard that there’s supposed to be a lot of lobsters down there tonight.”

In order to catch the lobsters, people must obtain a sport fishing license with an ocean enhancement stamp from the California Department of Fish and Wildlife.

An assessment by CDFW’s Dr. Doug Neilson in collaboration with Dr. Ernesto Chavez from Mexico determined in 2011 that the California spiny lobster population off Southern California was estimated to be stable from year to year.

“I was out at the lobster (harvest) at Catalina, … and it’s very cyclical, but this year didn’t seem to be particularly good,” Andrew Hughan, a public information officer with CDFW said. “The weather was kind of nasty Friday night, and then I went diving personally at Catalina and only got two, and we only saw four or five more.”

People at San Clemente Pier didn’t seem to be faring much better, but weather patterns could alter the spiny lobster activity throughout the season, according to CDFW personnel.

Preliminary information from CDFW from online fishing forums found the current recreational lobster fishing season had a majority of reports of several legal-sized lobsters harvested per person.
Lobster tails must be 3.25 inches wide. The daily limit of lobster take is seven, and a maximum of five nets can be cast by individuals. Two hoop nets can be cast on land-based structures and no more than 10 on a fishing vessel, no matter how many licensed people are on board.

More information can be found at www.wildlife.ca.gov. Look for the California Spiny Lobster Fishery Management Plan for a detailed report of the findings by the CDFW.