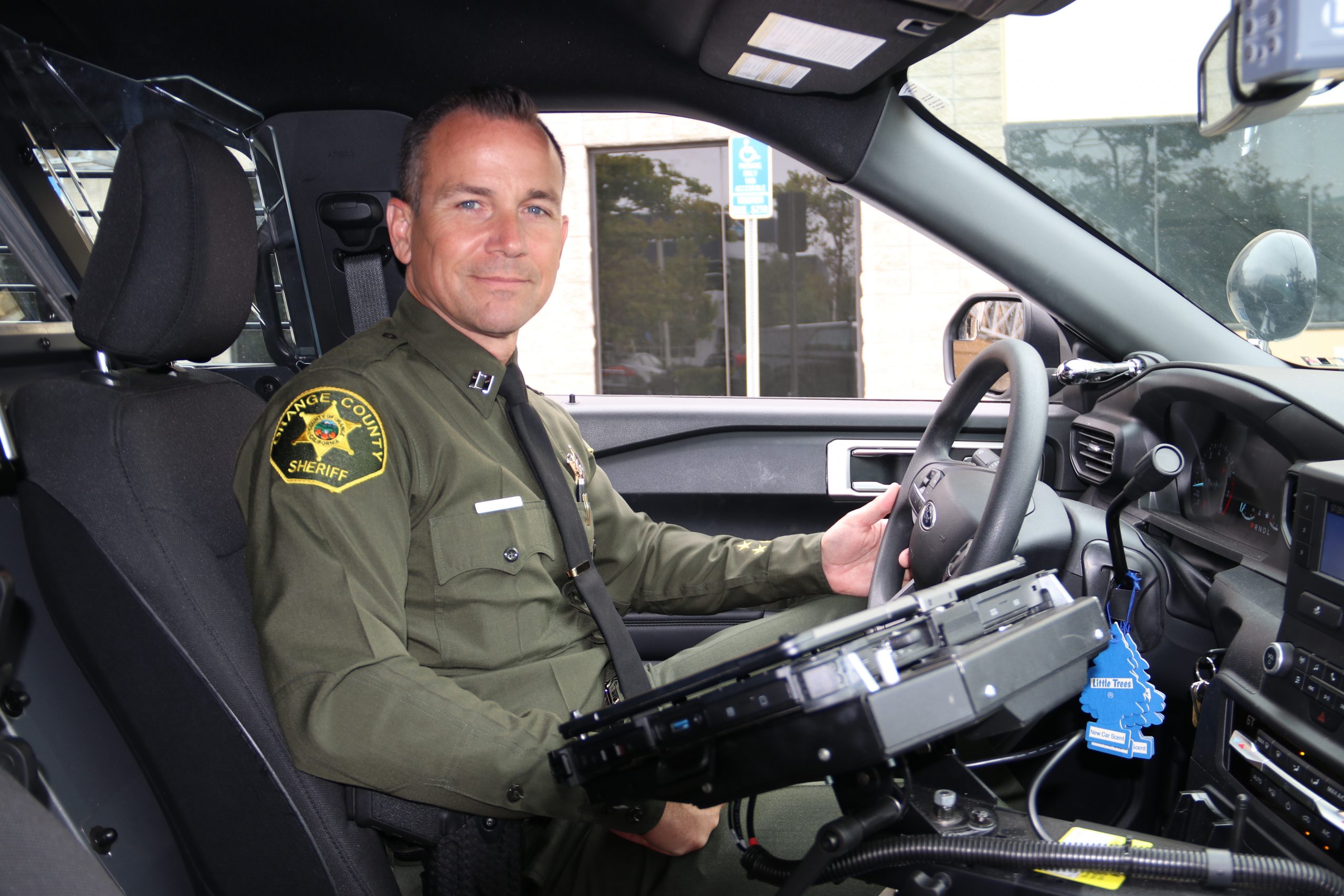 “For a lot of people, they’re dealing with police when a crime has occurred,” Benfield said. “And that’s unfortunate. There needs to be community engagement. There should be more conversation.”

The 24-year veteran with the Orange County Sheriff’s Department (OCSD) was named San Clemente’s new chief of police services, effective on Friday, July 16. Benfield served as the police chief for OCSD’s South Patrol, which comprises the unincorporated areas of Coto de Caza, Ladera Ranch and Rancho Mission Viejo. He replaces Capt. Edward Manhart as the outgoing chief—who led the local agency amid several widely publicized crises, including the police shooting death of Kurt Reinhold, a 42-year-old homeless man, and multiple politically and racially charged demonstrations within the city in 2020.

In addition to the coronavirus pandemic and the civil unrest within the city, San Clemente Police Services also saw an increase in arrests. While certain crimes trended down, Manhart emphasized the challenges the agency had been addressing.

“When people ask how busy we are, we are significantly busy,” Manhart said during a March 3 city council meeting. “Even though we had the pandemic and civil unrest, crime didn’t stop, and investigators and deputies have been working tirelessly to keep the community safe.”

Benfield, who grew up in a rural town, says he had little exposure to police and crime growing up. After taking an interest in criminal justice courses during college, he gravitated toward police work.

“My boss at the time was from (Southern California) originally, and he told me Orange County Sheriff’s Department was testing at Sacramento State. I went and applied and ended up getting hired,” Benfield said.

His entire law enforcement career has been with OCSD, since first being hired in 1997 as a sheriff’s special officer in the Orange County jails. A year later, he tested and passed the deputy academy.

“As someone who didn’t interact with police very much growing up, working in the jails was an eye opener. Going from a rural town to a big county like this was an adjustment, but the academy prepares you for both custody work and patrol work,” Benfield said. “I learned a lot in there. I learned from the inmates … how they got to be where they were, you learn about their crimes and how they committed them.”

Benfield says that by working in the jails, he developed an interest in narcotics enforcement.

“I could see that a large population of the inmates were somehow connected to drug use, abuse or sales—even if they weren’t charged with a drug crime, it was more often than not an underlying issue,” Benfield said. “It shaped the direction of my career.”

Benfield hopes to foster community awareness in San Clemente for how residents can protect themselves and understand the roles of OCSD San Clemente Police Services.

“A lot of times, when people are reporting something to the police, something bad has happened to them. I think that’s a shame,” Benfield said. “There’s opportunities for engagement, talking to business owners, residents and leaders … just letting them know we’re here.”

In March 2020, the city contracted Probolsky Research to poll San Clemente residents to gauge their thoughts on key policy areas, including a local police department.

Among the issues that residents felt should be a top priority of the city council, “reducing crime, gangs, drugs (and) graffiti” was of the second-highest importance, with 46.7% of the respondents agreeing it should be on the list.

Near the onset of the survey, participants were asked whether they approved or disapproved of OCSD’s services in San Clemente. The survey found that 47.7% of the respondents said they approved, while only 22.3% disapproved, and 30% were unsure or didn’t want to answer.

In the survey, pollsters told the respondents that it would cost the city $25 million a year for the town to have its own police force—an increase of $9 million compared to the Fiscal Year 2019-2020 contract with OCSD.

Support for an SCPD sharply diminished to 20.3%, while opposition grew to 50%. About 14% said they were unsure, and 15.3% said it made no difference to them.

“We apply what we do based off the state Constitution, state law and public policy. Any agency is going to run off those same boundaries,” Benfield said. “But what you do get with the sheriff’s department, as opposed to your own police force, is a much lower cost with much more resources. That was a huge benefit during the protests last year.”

The top priority for those surveyed, which received nods from 76.3% of the participants, was to address homelessness.

“Homelessness is everywhere. Even if you’re not in law enforcement, homelessness impacts your life in some way,” Benfield said. “There are homeless people just outside my own neighborhood, and I can understand the community’s concern.”

While acknowledging that homelessness is not a crime, Benfield says that “OCSD deputies will continue to conduct outreach and enforcement where they can, provided that outreach is the better solution at that time.”

On Sept. 23, 2020, a homeless man involved in an altercation with sheriff’s deputies was fatally shot outside the Hotel Miramar on El Camino Real. After making contact, a physical altercation ensued, during which deputies wrestled the individual to the ground, eventually leading to the shooting,

Orange County Sheriff Don Barnes said in the days following the shooting: “We don’t want to be mental health clinicians; it’s not our goal for law enforcement to deal with mental health issues …”

“We’re seeing armed confrontations, we see people losing their lives when dealing with the police across the country,” Benfield said. “I don’t know that this can be tied to the (Orange County Sheriff’s Department) or it’s just one of the realities of law enforcement.”

Throughout his 24-year career in law enforcement, Benfield says he’s developed by being around “principled people.”

“A good cop cares about the community they serve. They’re proactive to community issues and crime, not reactive. They have integrity and honesty,” Benfield said. “I’ve been fortunate enough to work with some great people.”

For National Night Out, an annual community-building campaign that promotes police-community partnerships and neighborhood camaraderie, Benfield and OCSD San Clemente Police Services will be holding an event in partnership with Orange County Fire Authority at Max Berg Park. The public is invited to meet with local police, fire and recreation representatives on Tuesday, Aug. 3, from 5-8 p.m.

“We’ll be at the park to introduce ourselves, answer questions, show them equipment,” Benfield said. “I’m excited to join this team and learn more about this city and address any concerns the community has.”