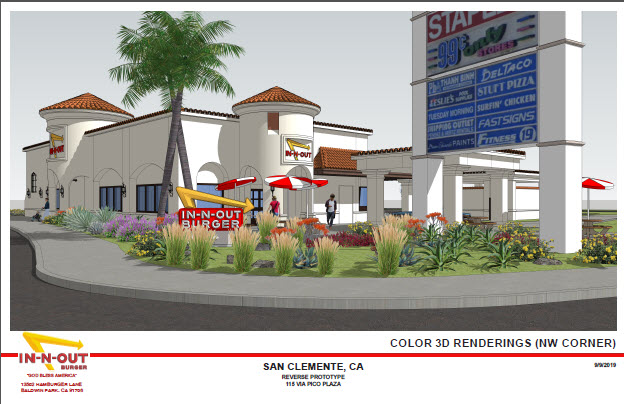 The newly seated city council already has its hands full with some important decisions to make after the New Year, but a vote on whether to reverse some conditions the planning commission imposed on the proposed In-N-Out project has been added to the plate.

At In-N-Out’s request, the current city council last week agreed to table until January a discussion and vote over an appeal the fast-food chain filed regarding its conditional use permit from the planning commission.

As a condition of approval, the commission tacked on a couple of caveats, requiring In-N-Out to remove the 7-foot-tall sign it had proposed from its plans, as well as the red LED cove lighting on the building.

Commissioners at the time had raised concerns over the sign and the lighting, believing the red LED lighting to be “incompatible” with the city’s Spanish Colonial Revival architecture and that “allowing it would set a precedent for allowing this type of Gateway areas,” according to the city.

As for the monument sign, commissioners felt it was “unnecessary and contributes to sign pollution due to its proximity to the existing non-conforming Pico Plaza pylon sign,” the city explained.

The popular West Coast burger establishment appealed the approval of the permit with the city, prompting the project to go before the city council to either reverse the conditions or uphold the planning commission’s decision.

When the four city councilors met on Nov. 17—in what was supposed to be their final meeting together before the newly elected members took office—city staff notified the body that In-N-Out had requested a continuation of the discussion until Jan. 19.

In a statement read aloud to the council last Tuesday, the company asked for the deferral so it could have “time to bolster our arguments,” and have Henry Lenny, the architect and author of the city’s guidelines on Spanish Colonial Revival architecture, express his support for the appeal.

According to the city’s report on the matter, staff is recommending the council approve In-N-Out’s appeal and remove the conditions on the LED lighting and monument sign.

“They (In-N-Out) are proud of the final architecture, which was the result of collaboration between the applicant, staff, Henry Lenny, and (Design Review Subcommittee), and believe the proposed LED cove-lighting is subtle, elegant, and appropriate.”

City staff also noted that the proposed “monument sign meets all development code requirements with regard to size and placement,” adding that “it complements the architecture of the building” with its aesthetics and other design elements.

Councilmember Chris Hamm, the only departing councilor from office after deciding not to seek reelection this year, expressed support for continuing the vote until January, recognizing the potential for another deadlocked vote, which could mean the project gets nixed.

“I don’t think anybody on council wants that to happen,” Hamm said, later explaining, “I’m more willing to discuss it this evening, but just as a footnote, I’m not willing to overturn what the planning commission has already approved or what their position on this issue is.”

The council unanimously voted to defer the discussion to January, when Councilmembers-elect Chris Duncan and Steven Knoblock have been seated on the dais, joining Councilmembers Kathy Ward, Laura Ferguson and Gene James, who won his reelection bid earlier this month.