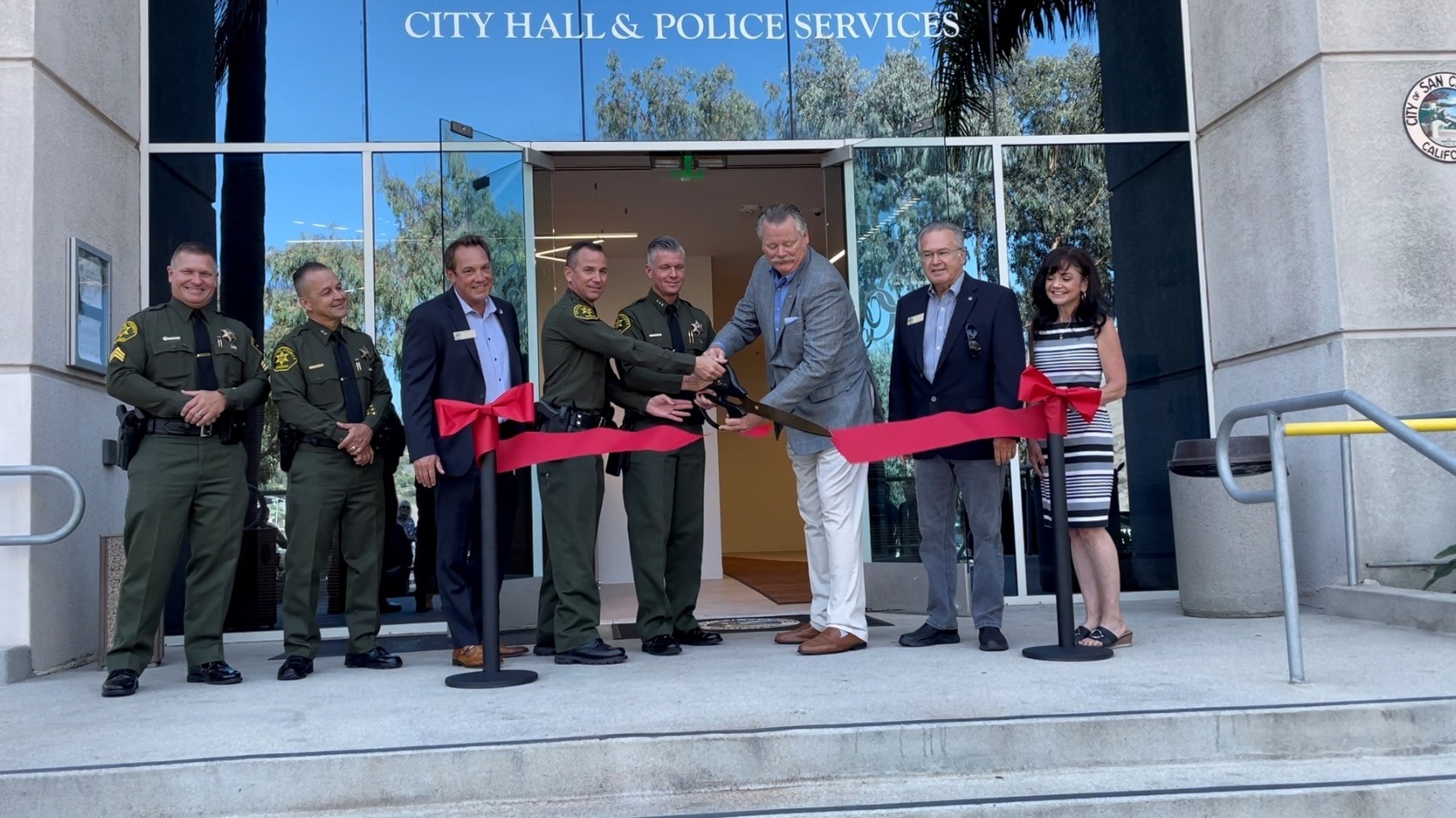 Deputy sheriffs and police personnel assigned to San Clemente now have an official command center in town, as the city on Tuesday, Sept. 21, unveiled its new substation for the Orange County Sheriff’s Department.

Public safety officers, along with elected officials and other dignitaries, gathered at San Clemente City Hall for a ribbon-cutting ceremony and tour, marking the completion of the $3.5 million project first approved in early 2020.

“This is a huge step for the men and women, both sworn and professional staff, who work for San Clemente Police Services,” said Capt. Tony Benfield, the city’s police chief, who was assigned to San Clemente in July.

“Obviously, this has been going on long before my appointment to this position, but they’re going on three years now of being in transition,” Benfield continued, referring to the officers and staff who, since May 2019, have had to work out of OCSD’s substation in Aliso Viejo.

The new substation, located on the second floor of the city hall building on Calle Negocio, gives OCSD personnel about 12,000 square feet of space and replaces OCSD’s previous offices at the city’s shuttered building on Avenida Presidio, where asbestos was discovered.

“The deputies are really looking forward to it, and I know they’re super excited to actually have a home,” Benfield said. “For years now, it’s like living out of a suitcase, so this is a permanent place for them.”

Recalling his first experience visiting the old substation, Mayor Pro Tem Gene James joked that “it wasn’t what you saw; it was what you smelled.”

“It was terrible. The city was not living up to its obligation to provide you a professional place to be. I think we hit it out of the park,” James said of the new station compared to the old one. “This represents $3.5 million of our taxpayer dollars that we’re investing in OCSD.”

Other elected officials, including Assemblymember Laurie Davies and representatives from the offices of State Sen. Patricia Bates and Orange County Board Supervisor Lisa Bartlett, also attended the ceremony to congratulate OCSD.

“We support our men and women (of OCSD), and thank you so much for your hard work,” Davies said, adding that Orange County has about “five of the safest cities in California, and that’s thanks to all of you.”

OCSD’s newest substation is equipped with office space, storage for equipment, men’s and women’s locker rooms and bunk rooms, as well as a fitness center that department personnel and city staff can access.

Benfield on Tuesday morning said the new digs for his team of deputies will ideally improve services in San Clemente, as well as officers’ efficiency and response times, as they’ll no longer have to start and end their shifts in a different city.

“I think you’re going to see them connected to San Clemente and engage more with the community, which is part of the design … we need to get out there more and know people and have them get to know us,” he said. “So, I think this is going to go a long way in achieving that.”

Over the next couple of weeks, OCSD staff will move into the offices, bringing down gear and transitioning patrol vehicles, and setting up their workspaces.

“They’re really excited about this station opening, and for good reason,” Benfield said, adding: “This is a self-contained, fully functioning, and obviously, a very nice workspace for our people to use. It’s going to make their job a lot better.”

By next spring, the deputies are likely to begin sharing the second floor with the city council, as plans to construct new council chambers using the remaining floor space are expected to proceed in December.

During a tour of the substation on Tuesday, Shawn Ryan, the city’s senior civil engineer, said the city is looking to have the council award the contract for the project by the last meeting of the year, and he anticipates construction to get underway in early 2022 and last roughly four months.

A council majority this past May voted to extend the city’s existing contract with Gensler, the architecture firm that designed the new OCSD substation. That approval granted Gensler an additional $176,000 to design the remaining 5,000 square feet of space for the council chambers.

The new chambers, where the council will hold public meetings, is designed to seat about 130 people—up from the roughly 80 seats the previous chambers had held at the old city hall on Presidio, Ryan explained.

For the past few months, the council has held its meetings at the San Clemente Community Center in downtown, where there’s more space for residents to practice social distancing during the COVID-19 pandemic.