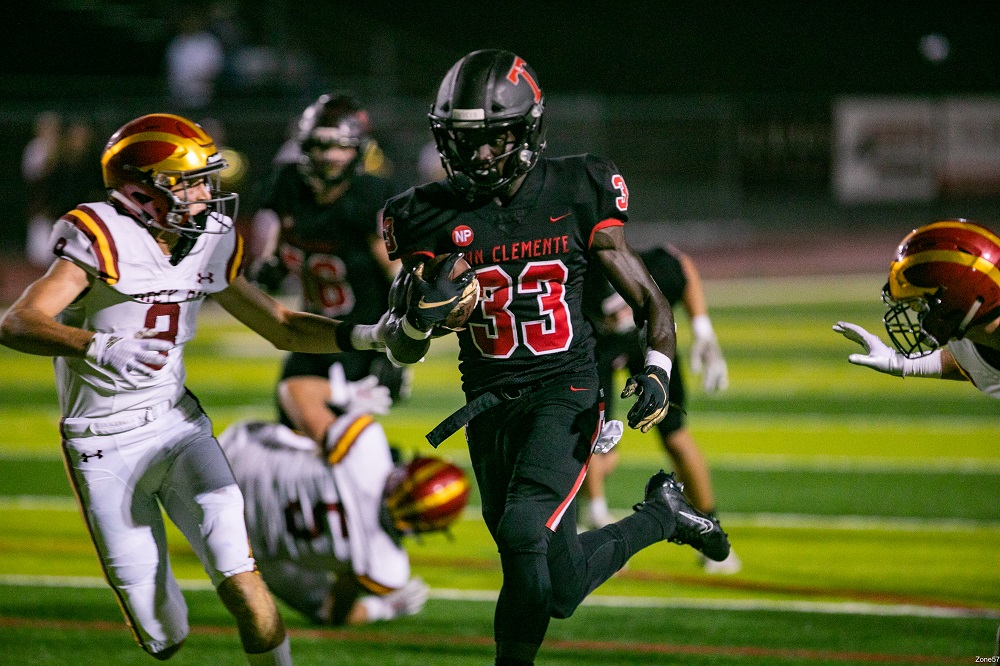 Change could be coming to the CIF-SS football playoff system.

The CIF-SS is working on a proposal to retool its divisional system and create playoff divisions after the regular season ends to include current regular-season results. The CIF-SS and Football Coaches Advisory Committee will present the proposal to the Southern Section Council at its first 2020 meeting in January.

CIF-SS did a background test run of this system in the 2019 season to get coaches to report scores immediately after the conclusion of each week’s games and gather information for what the new system could look like.

“The biggest question we had,” CIF-SS Commissioner Rob Wigod said in his Message from the Commissioner on Dec. 19, “was whether we could count on our schools to enter every score of every game into the CIFSSHome system. I am happy to report that question was answered, as out of our 378 schools playing 11-Man Football, 376 reported their scores by the end of the 2019 regular season.”

The CIF-SS football playoff system came under scrutiny at the end of the 2019 season, as there were 17 at-large playoff teams with sub-.500 records, including nine 3-7 teams, four 2-8 teams and El Toro in Division 4 at 1-9. Locally, Dana Hills missed the playoffs in Division 12 at 6-4.

The CIF-SS instituted its current competitive equity power rankings system for the fall 2016 season for several sports, with football chief among them. The section used data from the previous two seasons to create a set of power rankings to divide teams into more competitive divisions.

Initially, the system was met positively. There were less blowouts in early-round playoff games, and it gave some programs that had not been successful in recent seasons the opportunity to play programs of a certain level and win championships.

However, as time has gone on, some issues have arisen.

The higher divisions were created with fewer teams, but as evidenced by 1-9 El Toro, some divisions would not have a full roster of qualifiers to fill all 16 playoff spots. The lower divisions had opposite problems, with a much larger number of teams and occasionally too many qualifiers for their 16 spots.

The cream kept rising to the top, but some saw teams as being “punished” for successive good seasons. Others saw teams being “rewarded” for one great season after years of mediocrity. There were arguments on all sides, but it was clear there was some change needed.

The new proposed system would create power rankings using only current season results. The power rankings would include out-of-section and out-of-state teams, which the previous power rankings did not. For example, San Clemente played four Division 1 teams from the San Diego Section this year, and despite four wins on the field, they did not count toward its point totals.

The brackets would then be seeded according to the power rankings and regardless of league affiliation or finish. The higher-seeded team will host in the first round and league rivals could also meet in the first round. For example, San Clemente was the No. 2 seed in Division 2 this season, but the Tritons opened the playoffs on the road due to having to play a league champion. In the new system, San Clemente would have hosted as the No. 2 seed.

Wigod said the proposal will include what the 2019 playoffs would have looked like in the new system. It is unclear if that will be released publicly at this time. The new system would also do away with the weekly rankings.

“This new format will require a major cultural change on our membership’s part,” Wigod said, “because schools would not know their divisional placements until the regular season is over.”

While the culture of rankings discussions would be removed, the system would achieve its first goal of allowing every automatic qualifier to reach the playoffs while still leaving some room for at-large bids.

The proposal to the Southern Section Council, a collection of league representatives, will be for a first reading, and there likely will be plenty of tinkering done by the council and the committee of coaches.