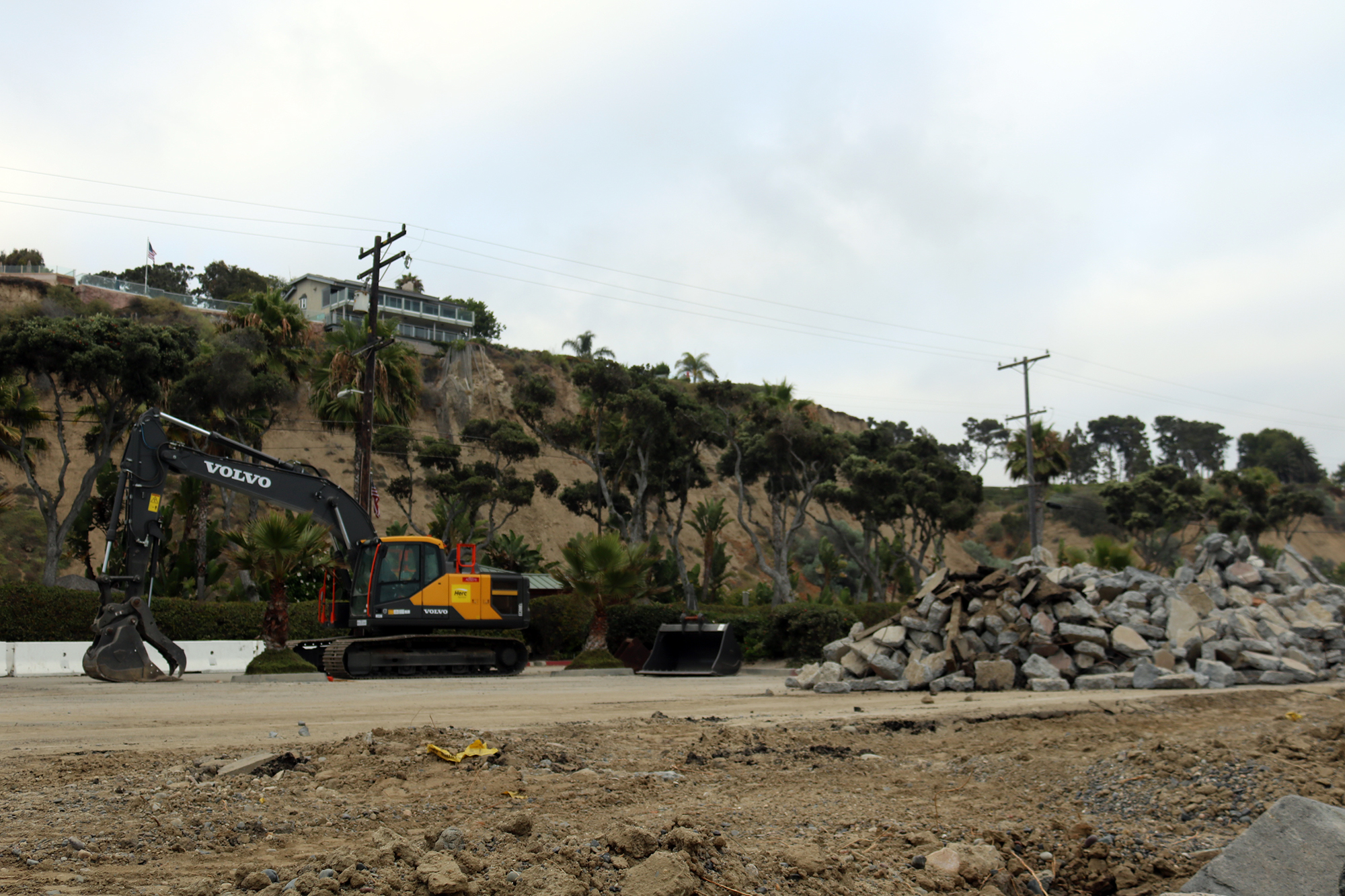 The California Coastal Commission (CCC) and OC Parks continue to collaborate over the future of Capistrano Beach Park, a beach that has sustained considerable damage and erosion in recent years. However, residents and local stakeholders are at odds over what that future should look like.

Video footage shows waves overtaking the parking lot on Independence Day, causing further damage to the beach’s sidewalk area. In October 2018, inclement weather and high tides caused the boardwalk and basketball court to buckle; those amenities, as well as a restroom, have since been demolished.

During a July 10 CCC meeting, both Mandy Sackett and Rick Erkeneff spoke on behalf of the South Orange County Chapter of Surfrider Foundation.

“All these emergency permit durations have elapsed, yet the riprap and sand cubes remained,” said Sackett, policy coordinator for Surfrider. “The sand cubes were a slight improvement, but they’ve remained past their six-month duration and they are starting to break down and become plastic pollution.”

Last month, the county applied for an emergency permit to place additional riprap boulders on the beach and for some sidewalk removal.

“We do not support more boulders on the beach; it doesn’t make sense here, and it’s creating a hazardous situation. More boulders will not solve the problem,” Sackett said.

Erkeneff, a Dana Point resident and vice chairman for Surfrider, echoed Sackett’s sentiments and played footage for the commission that was taken on Fourth of July.

“We’ve been monitoring the issues at Capo Beach. Over Fourth of July weekend, the parking lot was completely inundated, and the parking lot had to be evacuated. The sidewalks are buckled, the pavement is buckling,” Erkeneff said. “Anything less than taking out the entire parking lot, I think, would be a failed effort. I’d appreciate the consideration for denying future emergency permits for riprap.”

The CCC granted an emergency permit on July 23 for the demolition of damaged concrete sidewalk, curb and gutter, as well as 124 feet of wooden seawall associated with concrete anchor blocks and metal tiebacks. OC Parks crews will be removing debris, relocating ADA parking and K rails (moving landward) and filling in unsafe holes and drop-offs. Demolition was completed during the last week of July, and removal and completion of the project is scheduled to conclude this week.

For Dana Point residents such as Toni Nelson, preserving the beach and its coastal access trail is a priority.

“I understand the CCC’s insistence that armoring creates more erosion downcoast,” Nelson said. “I also understand that in the end, Mother Nature will win. What I don’t understand is why on Earth we can’t seem to bring all the stakeholders to the table—the community, coastal homeowners, OC Parks, State Beaches, the city of Dana Point and the Federal Railway Administration—to figure out what we are willing to spend and what mitigations we’re willing to try to save our coast (and, in truth, our coastal tourism economy) as long as we can.”

Nelson has an online petition that states support for OC Parks’ efforts to restore the path and protect it with armament and preserve public access.

“I think the county is doing what it can to preserve public access and enjoyment,” Nelson said.  “The (sidewalk removal) is a common-sense move that will facilitate a wider, usable beach, at least temporarily.”

If it comes to a choice between beach or parking, Nelson believes the community would vote for a beach every time.

“I’m hopeful the CCC will allow sand cubes and riprap to slow wave action—at least temporarily until stakeholders’ meetings can forge a less offensive solution,” Nelson said. “While the sand cubes do rip apart, the beauty is that they are not dangerous to beachgoers, and they can be opened up and deposited on the beach with little impact. They will at least temporarily protect the beach and the adjacent residential lots.”

But during the July 10 CCC meeting, Director Jack Ainsworth implied that riprap may not be the solution after Commissioner Linda Escalante expressed her shock at the video footage.

“This has been an ongoing problem,” Ainsworth said. “They’ve asked for rocks in the past, which we’ve said no to. We’ve allowed some temporary sand cubes that aren’t doing their jobs. They’re really going to have to reimagine that area for what it’s going to be in the future . . . we are working with the county.”

In an email to San Clemente Times, Charlene Cheng, a spokesperson for OC Parks, said the agency does not have current plans to demolish the parking lot.

“We will be retreating the asphalt parking surface in some locations due to recent damage and the inability to install adequate protection to the parking lot,” Cheng said. “Our next steps are to continue our cleanup efforts to make the site safe to reopen to the public.

Cheng said OC Parks is working with the CCC to follow up with a regular permit and is continuing to investigate alternatives to protect coastal access at Capistrano Beach Park.

“Capistrano Beach is more than just sand and cobble,” Nelson said. “To the residents of Capo Beach, it represents a repository of childhood memories, daily recreational pursuits and endless sunsets. In many ways, it’s a huge part of our cultural identity. After all, what is Capistrano Beach without its beach?”