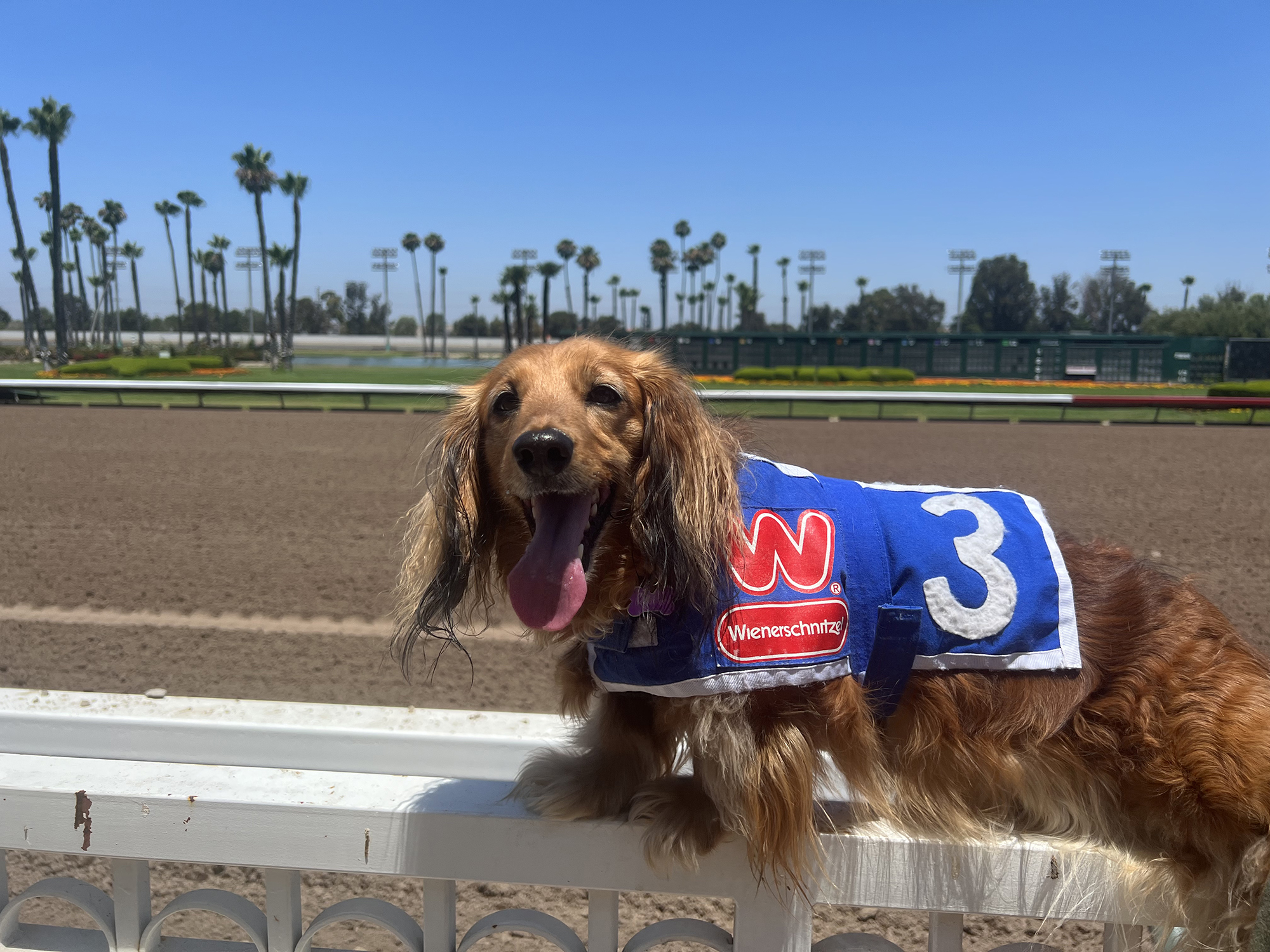 Around these parts, the Wiener dogs are small but mighty. Some see a hotdog with legs, but make no mistake, these Dachshunds can run.

With beaches and open parks galore, San Clemente is the ideal training ground for these speedy mutts.

However, in the land of four-legged paradise, there can only be one top dog.

Every summer, furry friends and foes flock to race tracks to contend for the spot. In the upcoming round, regular racers and their human counterparts should be warned, the competition is fierce.

Vying for victory is one up-and-coming firecracker, a redheaded 8-year-old miniature Dachshund, who, its owner, Lynn Moore, says, calls herself the “flying ball of fluff.”

Coming in hot, Kynzi, aka “Krazy Kynzi,” will stop at nothing to fulfill her dream and claim her title of “Fastest Wiener in the West,” at this year’s Wienerschnitzel Wiener Nationals.

After a three-year hiatus, the event, which raises funds to benefit the Seal Beach Animal Care Center, is set to return for its 25th edition, on Saturday, July 16, at Los Alamitos Race course in Cypress.

Though a first-timer, Kynzi is no stranger to the game, having participated in other Wiener dog races, including Southern California Wienerfest, Orange County Pet Expo, Temecula’s Wienerfests, Tustin Tiller Days, and at Old World Village in Huntington Beach.

However, the Los Alamitos event is “the ultimate of all races,” according to Kynzi’s application for the race, and she hopes to make it into the “Wiener’s Circle,” or the race’s “hall of fame,” so to speak.

A local to San Clemente, Kynzi prefers to train in the water, or in a tree. Competing alongside Kynzi will be her sister, Jazzy, while Moore cheers from the sidelines.

Once at the starting line, Moore describes, Kynzi gets amped up and barks a lot.

“It’s a lot of fun to watch her race, because all her hair is flying,” says Moore.

In order to participate, dog owners must submit a letter, or entry application, detailing their Wiener’s unique attributes and making an argument for why they deserve to win.

“Please make the letter as creative as possible because creativity, more than speed, counts here,” the Alamitos Race Course explains on its website.

In addition, people may also send poems, essays, videos and photos, as a way to tell a story and share the personality of the pup.

Winning over the judges, Kynzi’s application, written from her perspective, included a video and series of photos.

“I am cute and clumsy, love to soak up the sun and get belly rubs,” wrote Moore, in the written background, which was on hold for more than two years, because of the hiatus.

Based on the applications, dogs are selected to compete in trial races, and from there, the winners advance to the national race. Winning parties are awarded $100 for first-place in the trials, and $900 for the championship race.

Finn, a fellow local, first drew attention for his unlikely training methods, where his owners lure him to the finish line with a beach ball, as previously reported by the San Clemente Times.

After winning the 50-yard dash, the race’s most popular event, he quickly rose to stardom and has returned every year since, to reclaim the title.

He may have grown a few gray hairs since his last race, but this “silver fox” hasn’t taken his eye off the ball.

According to his parents, Josh and Brittany Snook, he has been doing a lot of “cross-training,” since becoming a big brother to a human, last June, and continuing to run away from his older Wiener dog sister, Zoe.

As for his training regimen, the Snooks acknowledge that Finn has been introduced to “a little more snacking,” nowadays, and prefers to join his baby sister in the wagon on Beach Trail walks.

What Finn lacks in speed, he makes up for in determination.

“He has one mission when the gate opens,” says Josh. “He is going to run his heart out, and I’m afraid that is literally going to happen.”

Regardless of the outcome, the Snooks ensure it is a good time for all.

“Your face will hurt at the end of the night from laughing so much, because it is that hilarious,” says Brittany.

And who knows, Josh says, the competition could be the start to a budding romance between Finn and Kynzi.

“It’s nice to have a little balance of chill and fiery, so we may have a little San Clemente love connection going on,” suggests Josh.

Come Saturday, it’s safe to say San Clemente’s own will bring a tough fight to the track. The question remains: Who will be the next top dog?