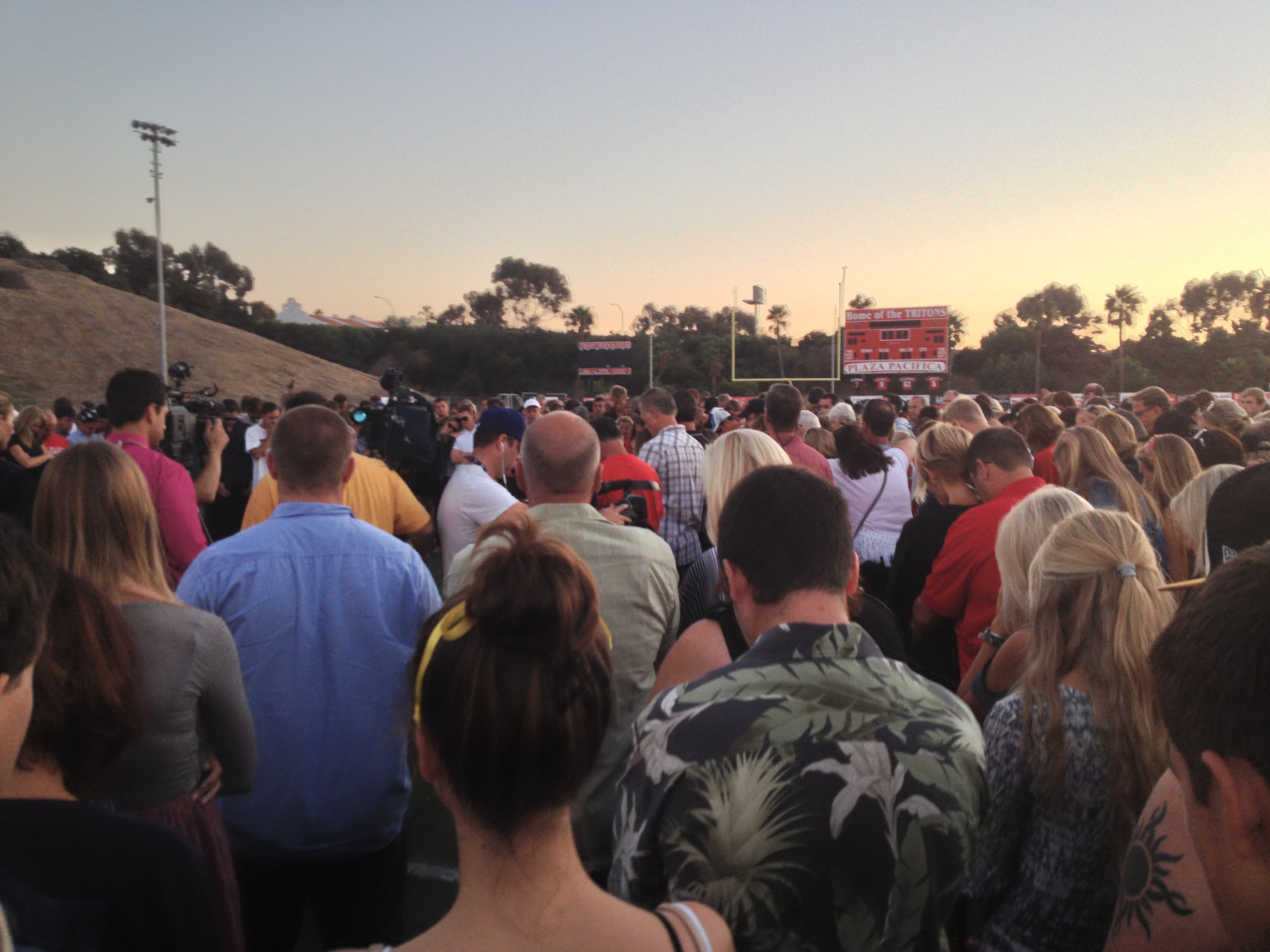 Nick Pasquale’s life was about proving his doubters wrong. But the death of the 20-year-old San Clemente High School graduate and walk-on receiver at UCLA has proven how many lives were touched by the young man and his family, as well as the strength of the community rallying to support one town and one team.

Pasquale, who was home during a UCLA bye-week, was killed early Sunday morning after being struck by a car near the intersection of Camino de los Mares and Calle Nuevo, near Forster Ranch. Orange County Sheriff’s Department personnel said the vehicle that struck Pasquale was driving in tandem with another car, which was able to avoid Pasquale. The driver of the Mercedes-Benz that struck Pasquale called police immediately and stayed at the scene. Drug and alcohol use has been ruled out as a factor in the incident, according to authorities. An autopsy indicated Monday Pasquale’s death was the result of blunt force trauma.

Mayor Bob Baker said what happened was beyond simple platitudes.

“Our hearts are broken by this,” Baker said. “There are no good words in a situation like this. It’s too tragic.”

The first days of school were somber with news of the accident, said Michael Halt, the new San Clemente High School principal.

“It certainly hit staff and a number of students very hard,” he said.

Grief counselors were brought in from the Capistrano Unified School District offices to assist students and staff if they needed it, Halt said. While the news made the opening of school somber, people were moving forward, he said.

“The Triton spirit carries us through,” he added.

Sunday evening, just hours after word began to spread about Nick’s death, hundreds of Pasquale’s former and current teammates, coaches, parents and people from the community, who were touched by the news of Nick’s passing gathered on the Thalassa Stadium field where Pasquale starred for the Tritons for three years as a varsity player. Together, they shared memories of a young man who always put forth the maximum effort he could.

“At the age of 8, Nick was diagnosed with Legg-Calve-Perthes disease, which meant the bone in his hip literally stopped growing,” Mel said. “He had to go in and get surgery. He was in a body cast for at least six months. Had three titanium pins in his hip. We were told he’d never play competitive sports in his life. Nick looked at me and said, ‘Dad, it’s not happening.’ The minute we got him home from the hospital, he was crawling up and down those stairs in a full body cast, up and down, by himself. This kid never, ever quit, and everyone told him he couldn’t do it.”

Nick transformed himself into one of the most valuable members of the Pop Warner football team his father coached, playing alongside future Pac-12 players like Kyle Murphy of Stanford University and Travis Wilson of the University of Utah, both of whom, along with Nick, would go on to star on the Tritons’ 2011 CIF-Pac 5 finalist team.

“These kids all had the same work ethic, but I think Nick might have taken it to another level because of his stature. If he had to do a little bit more than the rest of them, he did,” Mel said.

That attitude carried over when his high school career began. Mel, who’d already begun helping coach at the high school when Nick’s older brother AJ was there, said he saw it.

“He went and he did extra training. He never, ever stopped,” Mel said. “And he was probably the strongest kid on that team his freshman year. He benched pressed more than anybody and he was probably 5-feet 6-inches and 130 pounds. You can ask any kid, anyone that ever played with him, or any coach, he was amazing. He was probably pound-for-pound the biggest hitter San Clemente High School’s seen in a long time.”

“It’s been coming from all over the place. It’s been amazing, the love and support we’ve received, and what a great young man he was,” Mel said.

He also praised the response of Pasquale’s teammates and coaches at UCLA, including head coach Jim Mora.

“I got a hold of him early Sunday morning and he called me right away,” Mel said. “He was in disbelief, like I was. He was bawling on the phone. He said ‘What’s your address? I’m coming to your house.’ He was at the house an hour later, supporting my wife, my son and myself.”

Pasquale played his first game as a Bruin in the team’s season opening win against the University of Nevada on August 31, but the impact made by Nick Pasquale was greater than his contributions on the stat sheet, Mel said. The Bruins will wear patches on their jerseys honoring Pasquale against the University of Nebraska on Saturday. The Cornhuskers will also pay tribute to Pasquale by wearing stickers bearing his number, 36, on their helmets.

The Triton and San Clemente families have also risen to the occasion to support the Pasquales.

Cathi Klarenbach, a close family friend, helped organize the vigil Sunday night. She said the hundreds in attendance were proof of the many lives touched by Nick and the Pasquale family.

“Nick had so many friends, every kid loved Nick,” Klarenbach said. “That’s what was so evident Sunday. How he fit in with people, and how much they loved him so quickly.”

“He would just never quit,” Duarte said. “He was an excellent student academically, and on the field you’d always hear the PA announcer say, ‘Nick Pasquale on the play.’ He would be all over the field.”

Former teammates said much of the same. Bret Miller came to play with the San Clemente varsity team as a sophomore. Most seniors didn’t pay him any mind, except for one.

“Nick and a couple other guys took us in and showed us the ropes and helped us out with everything, every day. He was a great leader and a hard worker, he was the man,” Miller said.

Even after he graduated, Miller said, Nick still kept on him, encouraging him when he got down.

“He was a very nice guy. He always asked me how I was doing, if we ever wanted to hang out. He would text me and ask how I was doing in summer camp. If I told him I didn’t want to go anymore he would inspire me to keep going,” Miller said.

Friend Jake Graff said since he was young, Nick’s focus was on making it to the collegiate field.

Graff said Nick always served as a source of energy within their circle of friends.

“He was the motivator, always on his toes. He would say ‘Lets get the day on the move.’ That’s who he was. He’d say, ‘Waves are bad? Let’s go on a hike.’ His goal was to be active and be happy with the world,” Graff said. “He always wanted to be outside and be active. He did everything that made him happy.”

Graff said the outpouring of grief from the community, as well as the outreach made to the Pasquale family, was a testament to the kind of person Nick was.

“It’s overwhelming. Honestly, I didn’t know Nick or any of our friends had this impact on the community,” he said. “He had an impact on everybody like this. He was my best friend. People I don’t even know are calling me and saying they’re sorry for the loss. I don’t know how to accept it. I still haven’t accepted the fact he’s gone. I don’t know how to handle it.”

Klarenbach said the support for Mel and Laurie Pasquale, also showed how much they had touched the community.

“Their house was packed as soon as people heard,” Klarenbach said. “People were parked three and four deep along their street. Everyone felt they had to be there for them.”

Mel said he felt overwhelmed by the show of support the family had received since news of the accident spread throughout the city.

“The love and support we’ve gotten from this community has been absolutely awesome,” Mel said. “Without them, I don’t know if I would be outside of my house right now.”

Services will be held at 4 p.m. on Sunday, September 15 at San Clemente Presbyterian Church, located at 119 Avenida de la Estrella.

Steve Breazeale contributed to this report