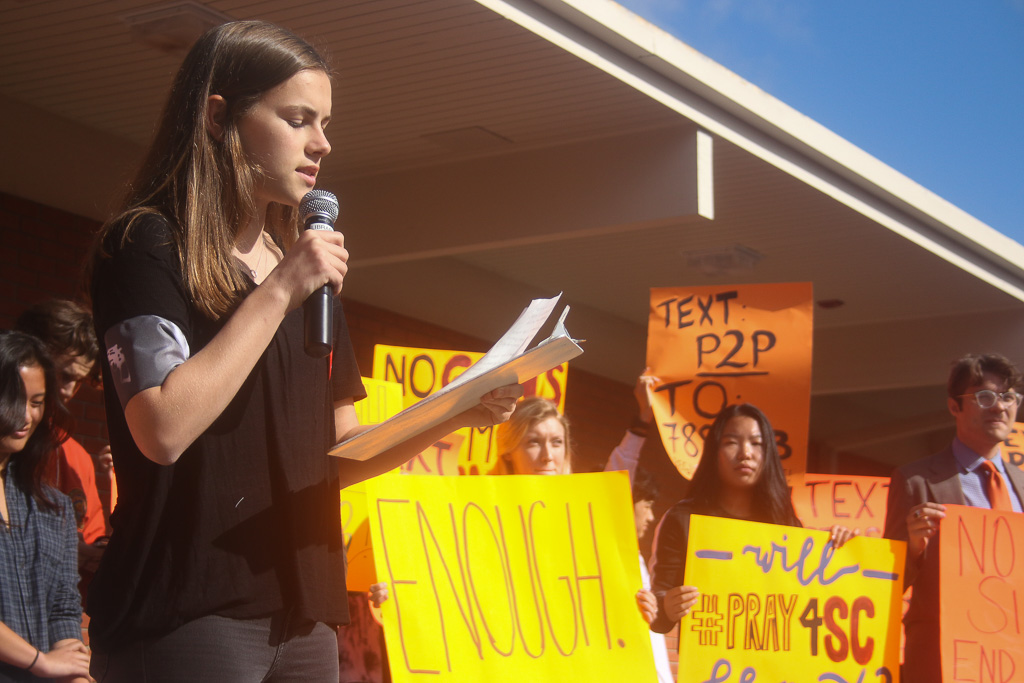 As the U.S. Legislature continues to grapple with gun law reform, students around the country voiced their discontent with what they say is a lack of action taken at the federal and state levels.

On Wednesday, March 14, hundreds of students gathered in the courtyards of San Clemente High School (SCHS) to support the protest. However, some students were indignant of its message, stating that the walkout was politicizing the deaths of the 17 students who were killed at Marjory Stoneman Douglas High School in Parkland, Florida on Feb. 14 in the name of gun law reform.

Jackson Hinkle, an activist student at SCHS, emceed the walkout with a few fellow speakers. Hinkle said some of his colleagues told him they don’t feel safe regarding current gun policies, and he argued that increasing the number of guns, like arming teachers, would not help that notion.

“We have to take steps to decrease the amount of guns, and Congress needs to get on that immediately,” Hinkle said. “Easy accessibility to guns is the problem, and we need to end it.”

Carni Campbell, a senior at SCHS, speaks during a walkout on March 14. Photo: Eric Heinz

A student holds a sign in support of the walkout on March 14 protesting current gun laws in the United States. Photo: Eric Heinz

Some students at the walkout on March 14 said the walkout was opportunistic for political speech or disagreed with the notion to reform gun laws. Nationally, gun rights advocates have suggested arming teacher to keep students safe. Photo: Eric Heinz

Esther Mafouta, a sophomore SCHS student, speaks to an audience of her peers during a walkout demanding gun law reform on March 14. Photo: Eric Heinz

Several students brought a Gadsden flag with them while wearing National Rifle Association hats during the walkout on March 14 at SCHS. Photo: Eric Heinz

Some students carried signs that read if they were ever killed in a school shooting, they would want their death to be politicized if it meant a change to gun laws.

“We will continue to fight for them,” said Carni Campbell, a senior SCHS student. “Emma Gonzalez, a survivor of the Parkland shooting, is an example of the youth leadership we need when adult leadership is lacking. Enough, because we are tired of being afraid. We are tired of a government that refuses to recognize and change a problem that is plaguing our country.”

Sam Chen, a student at SCHS, said her family left North Korea due to oppression, but now the prominence of gun violence has compelled her to speak out about a new threat.

“No longer can we stand idle as lives are lost through a flawed system of corruption,” Chen said. “I  will not stand to let the hardships and sacrifices of my forefathers be wasted by inactive legislation.”

Throughout the walkout, there were dissenting opinions from students; one group brought a Gadsden flag (the yellow flag with the snake and the words “Don’t Tread on Me” on it) while wearing National Rifle Association hats.

Brayden Young, 16, an SCHS student, was trying to speak following the walkout, but students had only scheduled the event for 17 minutes and had to return to class.

“This is very intolerant,” Young said. “This is the memorial day of the shooting, and they come here and politicize their views and speak about what they want, standing there saying how we need gun (law) reform and change while using the kids who lost their lives as a political agenda, and I don’t think it’s right.”

Prior to the walkout, Capistrano Unified School District (CUSD) distributed an email to parents and said that the district would support the students’ right to walk out but would not tolerate any additional absence following the demonstration.