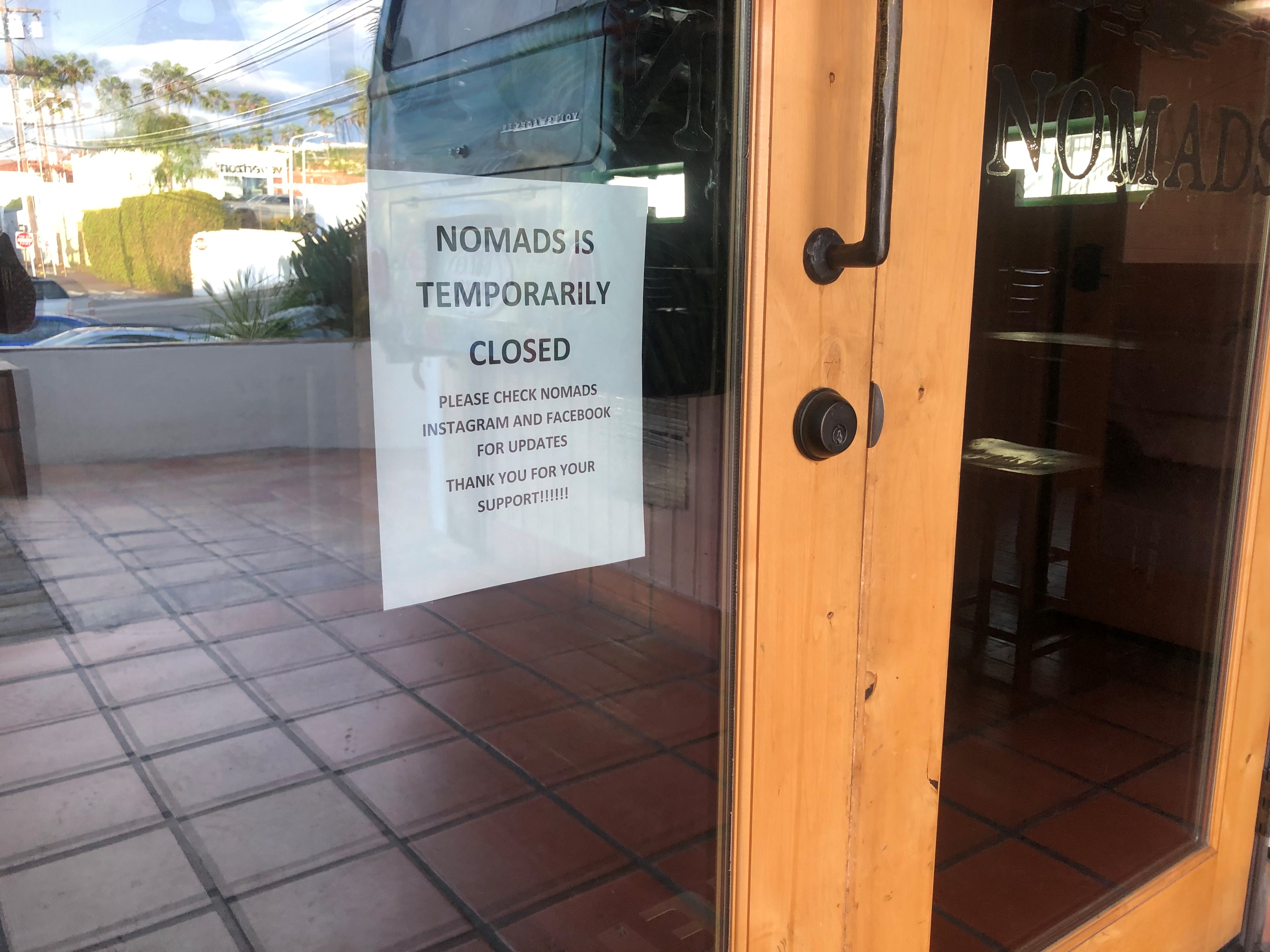 Ahead of what could have been a potentially busy Memorial Day weekend for Nomads Canteen, which reopened for dine-in service in defiance of stay-at-home orders earlier this month, the restaurant’s owner decided last week to temporarily close.

“We’re just ducking out for the busy weekend,” Jeff Gourley said on Tuesday, May 19. “We wanted to avoid the big crowd over the big weekend.”

The move, Gourley explained, was a voluntary one to address understaffing. Recognizing that reopening Nomads back on May 1 garnered considerable national media attention that also drove an influx of customers to the restaurant, Gourley said his shortened staff had been overwhelmed and frankly wouldn’t be able to keep up with the expected holiday crowd.

Because of unemployment compensation, Gourley said, “About 50% of my staff doesn’t want to come back to work, so that left us extremely short, especially with the huge numbers of people that were showing up. So the service would suffer.”

Gourley notes that his decision also came after getting wind of a proposed set of emergency regulations from the state’s Department of Alcoholic Beverage Control (ABC) that, if enacted, could put his liquor license in jeopardy if he continued dine-in operations.

Under the proposed regulations, which were submitted to the Office of Administrative Law (OAL) this week, ABC would be able to make an emergency decision to temporarily suspend a license or licensed privileges from a licensee who is found operating in conflict with state-of-emergency mandates.

OAL is tasked with reviewing administrative regulations that state agencies propose to ensure that polices are necessary and legally valid. The office is currently accepting public comments through May 26 and is expected to make a decision on ABC’s proposal in the days following.

According to current law, ABC notes, the department is required to go through what often is a months-long accusation process before a formal decision on a license status can be determined—and that’s not including the additional time for an appeals process.

“Even when an ABC decision is final, ABC decisions are subject to an automatic stay if appealed to the Alcoholic Beverage Control Appeals Board,” ABC states in its summary of the regulation proposal.

If OAL approves the proposed regulations, Gourley’s liquor license potentially could be suspended immediately if ABC paid a visit to Nomads while open for dine-in service.

“When we opened, we were the only open place,” Gourley said, adding: “But we had such a line and such a big scene, which kind of defeated my purpose not to serve the world, so to speak. So we’re kind of just ducking out, so people could kind of go back to their own restaurants—not that we don’t like the support.”

When Gourley reopened Nomads Canteen, he previously told San Clemente Times, he did so with the intention of practicing social distancing, such as spacing out tables and having customers wait in the patio area for a table.

While Nomads’ reopening attracted support from hordes of customers, it also caught the eye of county health officials, as well as officials with ABC, who advised him to cease the dine-in operations. The ordeal, he said he believes, has put a target on his back.

“In my situation, ABC came down to monitor us, asked us to stop violating with a formal letter,” he said. “So I felt like, ‘Boy, they’re gunning for us,’ and with this new clause, we better be smart.”

When asked to comment on the Nomads situation last week, John Carr, ABC’s public information officer, said he couldn’t make a statement other than to point to the department’s current guidelines on how it is handling restaurants defying the state’s social distancing order.

“ABC’s preference is education over enforcement. The department continues to follow up on any reports about ABC-licensed businesses reopening to inside dining and alcohol consumption on the premises in counties where that is not allowed,” Carr said in prepared statements emailed to SC Times.

Carr also wrote on Friday, May 15, that ABC had made contact with 111 locations in 43 counties. Most, he said, have complied with the request to stick strictly to takeout services.

Gourley, however, says that’s not a financially viable option for him, and he would prefer to just remain closed until he can return to normal operations. Prior to reopening for dine-in service, Gourley had offered takeout over the weekend.

“I’m going to stay closed until I can go back to normal business. I’m not interested in takeout; it doesn’t work for our business model. . . . Our profit is based on alcohol sales,” he said.

“But the main thing for me is, I didn’t open Nomads to be a Chipotle. I opened Nomads to be a place for community to come hang out and swap surf stories and come enjoy each other, to be a social gathering,” he said. “I never wanted to be a takeout business, and I don’t appreciate the government trying to force me to be a business model I had no intent on doing.”

The county’s environmental health division had previously spoken with Gourley during the first weekend Nomads was reopened. News outlets had reported that the health office intended to issue Gourley a warning, notifying him that remaining open could lead to a potential permit suspension.

That was before two Orange County Board Supervisors had stepped in to tell the health office to stand down and rescind its previous threat of punishment that had been issued.

In a follow-up email to SC Times, Gourley said he is in the process of hiring more staff and will be training them over the coming days. He also said he intends to reopen after the holiday weekend.