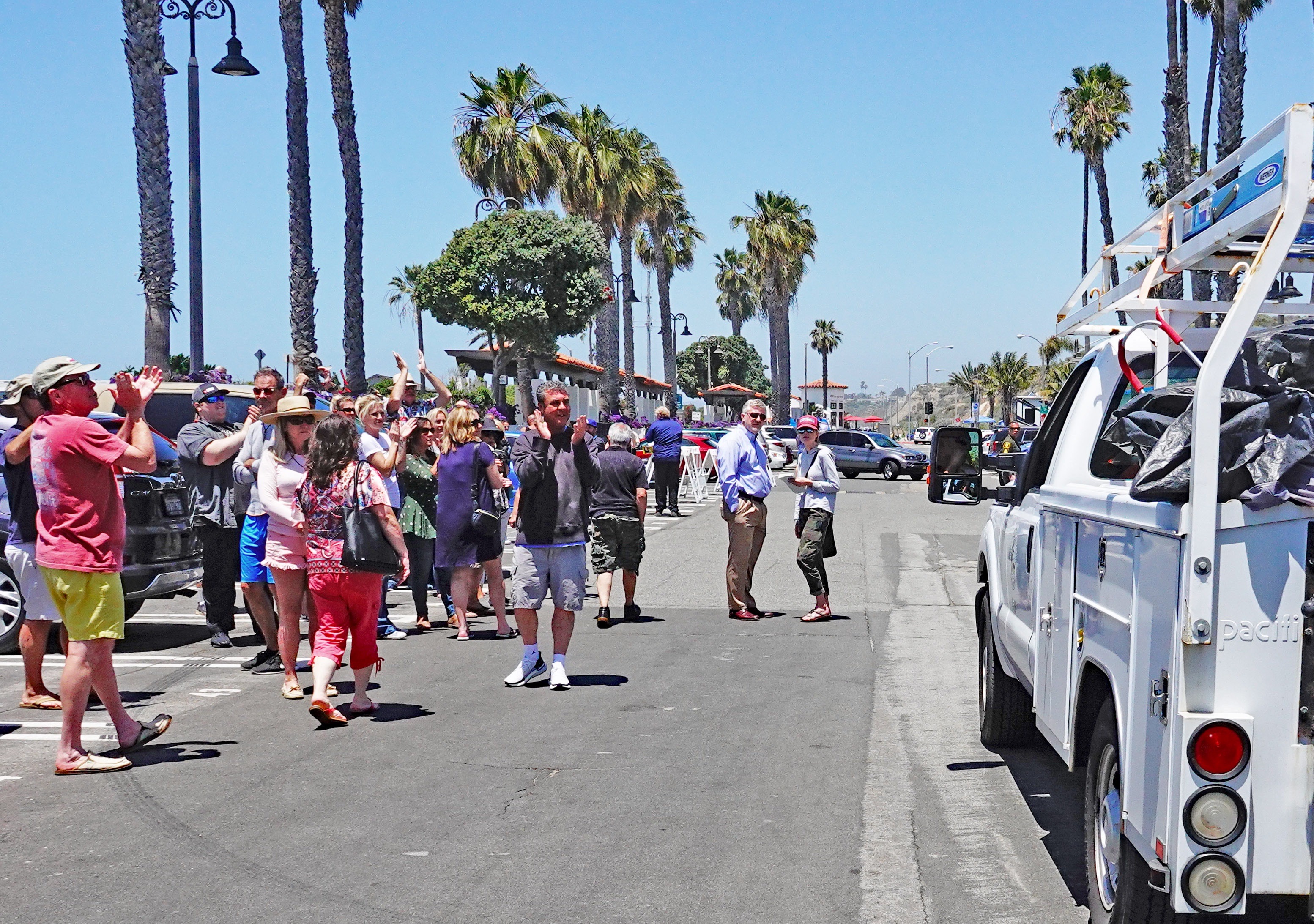 Many residents cheered as homeless people began taking down their tents and packing their belongings on Friday, May 24, at the encampment in North Beach.

Crowds of onlookers started forming around the Metrolink train station around 9 a.m., with people anticipating the enforcement of the city’s “urgency” ordinance, which San Clemente City Council adopted on Tuesday earlier that week.

Officials from the Orange County Sheriff’s Department arrived after 11 a.m. to enforce the ordinance, which bans camping on public property and cites immediate threats to public safety, health, and welfare.

Carrie Braun, public information officer for OCSD, said on May 24 that people with tents had the choice to pack up and move to the city’s designated lot up the street on Avenida Pico or make alternative decisions.

Sheriff’s deputies and health officials were brought out to assist individuals in their move. OCSD healthcare workers offered services and resources to those who wanted them.

Braun said the Sheriff’s Department would take as long as necessary for people to comply with the ordinance or potentially face a misdemeanor.

By Saturday morning the following day, no tents were left up at the parking lot.

A handful of campers moved willingly to the city lot, which is estimated to cost San Clemente $50,000.

Neon-clad city workers and some locals helped a few campers take down their tents and load their belongings into trucks. The homeless were offered rides up to the city-owned property between the city’s maintenance yard and U-Haul Moving & Storage of San Clemente, located at 310 Avenida Pico.

The half-acre storage lot consists of a dirt floor that was fenced-in on all sides, equipped with lighting and trash cans dividing room-sized spaces for each person to set up camp. Each space was numbered and within walking distance to Porta Potties situated on one side of the lot. Campers provided their own shade.

The site is considered a temporary relocation site, with the city making plans for a permanent, long-term solution. The city said there would be security during the evening hours.

A man named Steven Gustafson, who is known as “S.G.” and has been homeless since 2016, said he was packed up and ready to move to the new site by 10:30 a.m. on May 24. The former surf shop owner and board shaper told the San Clemente Times, “I’m not going to mess around. If they’re going to give me a place, I’m going.” He said his dog, “A-Pearl,” would go with him.

Others were less willing to go, standing their ground for as long as they possibly could. Deputies stood guard as one homeless woman wielded a knife as she packed up her tent.

Another man, Duane Nichols, also held out for a while. He eventually removed his tent, but declined city staff’s help to move his belongings.

Nichols was one of three homeless people named in a Feb. 27 lawsuit filed against the city of San Clemente and four other cities—Aliso Viejo, Dana Point, Irvine and San Juan Capistrano—along with the County of Orange.

Attorneys representing the homeless clients sent a letter to San Clemente’s city attorney May 22, threatening to sue the city if it moved forth with the ordinance.

The attorneys, Brooke Weitzman, Carol Sobel and Catherine Sweetser, accused the city of violating the Eighth Amendment under the Martin v. City of Boise decision while failing to provide “adequate indoor shelter” for the homeless; they also called the city’s lot identified for relocation as “inhumane.”

Weitzman told the San Clemente Times on May 24, “The ninth circuit has said . . . that you cannot criminalize camping outside if there is no indoor alternative, and they (the city) are not offering any alternative.”

The defendants’ motion, filed on May 24, questioned Judge Carter’s ability to remain impartial due to his “personal fact-gathering activities and deep involvement in county-wide settlement efforts” related to a 2018 homeless lawsuit that led to settlements with several north and central Orange County cities.

During the May 24 moving of the homeless, San Clemente resident and recent city council candidate Gene James said that the council has struggled to come to a consensus on the issue.

James called the North Beach encampment an “eyesore,” and said, “These citizens have had enough.”

Residents have complained of public urination, defecation and drug use at the beach encampment.

The relocation of the homeless appeared to be an emotional experience for many of those involved.

A couple of enraged residents continuously yelled obscenities at Weitzman, as she stood between homeless campers and the crowds. Other locals were grateful for having the homeless encampment moved away from the beach.

San Clemente resident Casey Dahm, who is being evicted from the Vista Del Mar Apartments so that a program to house chronically homeless can move in, said he would like to see a more balanced approach to the city’s issue of housing the homeless.

“Orange County really needs to have more shelters in place—facilities that are big enough to manage this problem and to offer solutions with mental services and substance-abuse counseling,” Dahm said.

He indicated the need for rules at the shelter. At the site where homeless are currently allowed to camp, the city has posted a “Community Safety Plan” with a list of rules and standard operating procedures for the encampment.

Violation of the plan can lead to citation or arrest, it said. The laminated piece of paper pinned to the fence declared quiet hours to be from 10 p.m. to 7 a.m. Campers are forbidden to bring in weapons, alcohol, drugs or drug paraphernalia, illegal substances, dangerous tools or personal lighters.

Some illegal behaviors include violence, harassment, or threatening behavior of any kind; theft of property; defacing or destroying property; bullying others and possessing flammable items.

“They have to want to help themselves,” Dahm said. “Willingness is one of the biggest things when it comes to change. Willingness on Orange County’s side, willingness on the people that are homeless and from the community. Everybody has to be willing to come together to try to make a change. And do it in a way that has compassion, too. I understand that people get angry; we all do. But at some point, you’ve got to put that aside and say, let’s focus on a solution.”