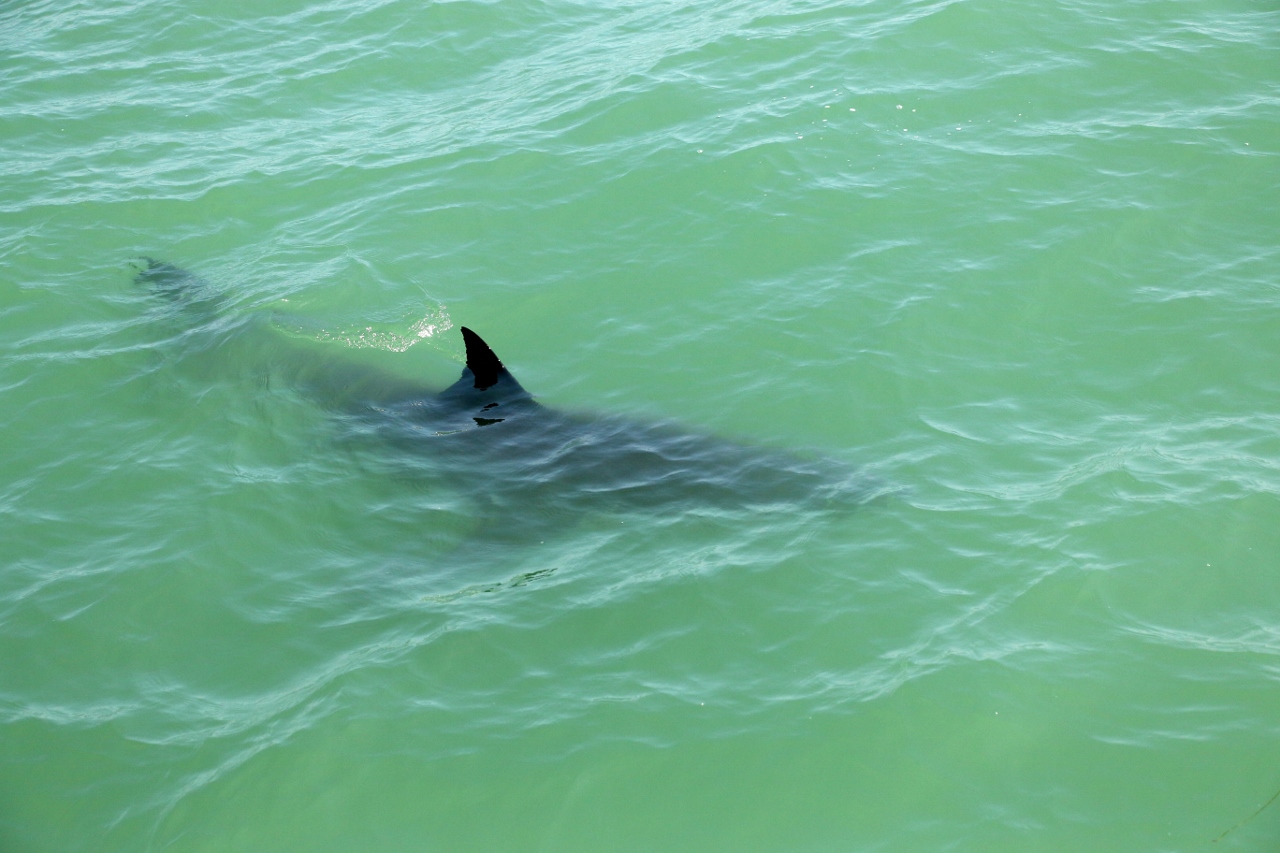 Not Out of the Water Yet: Great White Sharks Still Abundant in South OC Waters

More than two hours on the Dana Wharf Sportfishing boat and there was nothing but ocean to be seen, let alone the elusive creatures sought by the ship’s captain.

A few surfers were out in the water, but a gathering of curious kayakers was on the lookout for great white sharks, which have been spotted frequently in the last few weeks, from San Onofre State Beach to Doheny.

On Saturday, May 13, captain Todd Mansur was beginning to doubt if the first-ever shark tour would be successful.

And then the magic began.

“Eight great whites at 10 o’clock!” Mansur bellowed with a hint of relief.

The 30 or so people on board had been craning to get a look at the stigmatized predators. At least eight great white sharks circled the vessel as children and adults watched them maneuver.

Mansur said he was speechless.

“I’ve been sailing just about everywhere for years, and I’ve never seen anything like this,” Mansur said over the intercom.

The sharks were spotted by a friend of Mansur’s, and using a drone to search for them, he was able to pinpoint their location.

Mansur said he doesn’t think, but also wouldn’t dispute, global warming played a role in the uptick of sharks seen in the area. He said the reason for this is more likely due to a large grunion run this year, which usually takes place in early May. Grunion are small fish that flop onto the shore each year.

A crewmember of Dana Wharf Sportfishing tries to capture a great white shark on camera on Saturday, May 13, near Capistrano Beach. Photo: Eric Heinz

A juvenile great white shark swims near the Dana Wharf Sportfishing boat in May 2017 near Capistrano Beach. Photo: Eric Heinz

“Water temperature has some relevance on why these sharks are here, but that’s not what’s happening today,” Mansur said. “Due to different types of currents we saw a decrease in shark activity in year’s past.”

The sharks seen on Saturday have been hunting through kelp forests that bloom in sunniest times of the year, and that’s where the grunion hide, Mansur said.
Mansur said most of the sharks that have been spotted in the last week have mostly been between the San Clemente Pier and Doheny.

“Just the word ‘shark’ puts fear into people, but if you’ve grown up swimming here, then you’ve swam with a variety of different sharks,” Mansur said. “They all come and go to the shallow waters, and certain times of the month of May, you’re likely to see a lot of ‘forage fish.’”

Most of the sharks in the water were juveniles, about 8 to 10 feet in length.

Great white sharks are protected under California law because of over-fishing that caused their numbers to plummet.

Mansur said the earthquake that devastated Sri Lanka in 2005 also affected currents and could be a reason for some of the changes in fish and marine wildlife behaviors. He said people who work at fisheries and ocean enthusiast in general noticed a large decrease in the fish that were coming to normally plentiful areas.

Similar events that may not have received as much attention could have also steered sharks on a different course.

Two weeks ago, a woman was attacked by a shark at Church beach at San Onofre State Beach and she is still recovering. People who witnessed the attack suspect the shark was chasing a sea lion and inadvertently attacked the woman.
Whether the sharks will continue to show up around south Orange County beaches remains to be seen, but Mansur said he thinks now that the grunion runs have ended, it’s likely going to slow down.