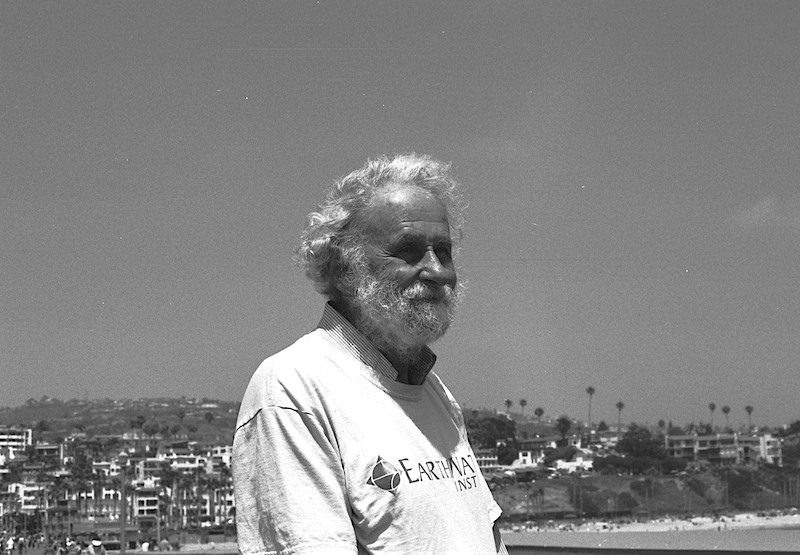 Alan White passed away on March 30, 2019 in San Clemente due to coronary arrest after a long fight against Alzheimer’s Disease.  Alan gave his body to the UCI Willed Body Program for medical research after which his remains will be cremated and buried at sea.

Alan was born in Schenectady New York on June 26, 1935 to Louis and Margaret De Angelus White.  He was an only child born into a very large extended Italian Family (Alan’s family surname was changed from Bianci to White in the US.) He is survived by many cousins who reside on the east coast.

Alan’s family moved to California in 1949 when he was 14.   As a very devout Catholic, Alan was enrolled for ninth grade in the Los Angeles Archdiocesan Seminary with the intention of becoming a priest.  After graduating high school Alan decided that the priesthood was not his calling.   Instead he attended Loyola University, where he obtained a BA in Philosophy in 1957.

Then Alan undertook a life changing journey and adventure around the world,  first teaching at missionary schools in Sudan, Uganda and Tanganyika for over three years and then taking the slow way home traveling through Kenya, Rhodesia, South Africa, India, Afghanistan, Hong Kong  and Japan before returning to the US after five years abroad in 1962.

Upon his return to the US, Alan obtained a master’s degree in English from Loyola University before pursuing his teaching career that began in Los Angeles but the bulk of which was spent teaching at Serra and Dana Hills High Schools.  Alan loved teaching and always tried to get his many students to think for themselves and take an interest in literature and current events.

Alan never married but he was never alone.  He was an active member of many organizations for decades, including the San Clemente Body Surfing Club who met weekly to swim and feast at North Beach; The Orange County Peace Coalition which advocates for peaceful resolution to international conflicts; The Nation Club a discussion group which sought solutions to the ills of the world; the Cousin’s Club who advocated for peace in the Middle East; the Sierra Club with whom Alan loved to hike and advocate for the Earth itself; the Society for Bighorn Sheep a group who spent many days camped out counting borregos in the Anza Borrego Desert; the OC Interfaith Committee to Aid Farmworkers with whom he marched for living wages and safe working conditions; and the Green Party. Deep inside Alan was connected to Catholicism but did not practice.  He spent most Sundays attending the Orange County Friends Quaker Meeting in Irvine before making his rounds to visit his friends at the OC Catholic Worker Isaiah House for the homeless.

Alan lived quite frugally and gave generously to dozens of charities and causes he believed would make the world a better place.  His prized possession was his beat up old camper that he used to take friends on camping trips to the mountains or diving trips to Mexico.  He loved to eat and took great pleasure in entertaining friends at the Fisherman’s Restaurant.  Family and friends near and far are saddened to lose a man who in his way was larger than life and lived every minute to the fullest. Alan White got his money’s worth and will be missed.

A Quaker service and a Celebration of Life are planned for the SC Community Center, 100 N. Calle Seville, SC, Friday, May 10 at 11:00 AM.