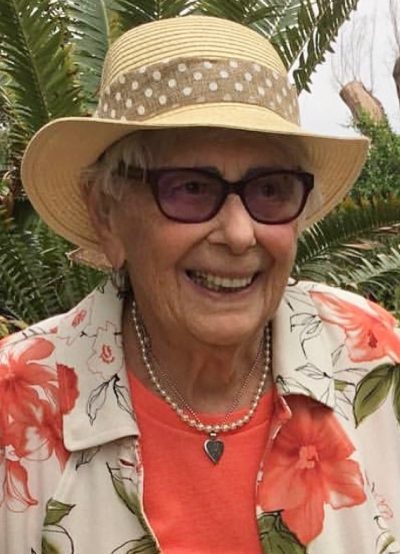 Rhoda Rafkin, a San Clemente educator and environmentalist, died peacefully in her San Clemente home surrounded by friends and family on September 11, 2019. She was 98.

Raised in Connecticut, Rhoda and her husband, Gerry, moved to south San Clemente in 1963 from China Lake, Ca. where the couple ran a pharmacy. Trained as a special education teacher, she substitute-taught while she raised two children.

After her husband died in 1977, Rhoda attended Saddleback College where she studied Marine Biology and became passionate about environmental issues.

In 1988, then working at Dana Point’s Ocean Institute, she launched a program for special needs children and adults. With her “Ocean in Motion” van she brought living marine animals to tens of thousands of children and adults unable to navigate waves or sandy beaches. She also developed programs for children about ocean pollution. In later years, Rhoda remained an employee at the Institute and helped with fundraising; she worked her last shift just two days before her passing. Her work was written about in the San Clemente Journal .

Rhoda, who kept current with both technology and politics, was a keen crafter, an avid gardener, a life-long Democrat and an aficionado of yoga which she practiced for over thirty years. In the mid-1980s, she appeared on several television talk shows as a supporter of gay rights. She mentored many local educators and kept active with a wide circle of friends and neighbors many of whom visited her home in her last days.

Rhoda is survived by her children, Rocky and (Kathy) Louise, her grandchildren, Ryan Rafkin and Ashley Rafkin Peterson, and her beloved dog, Bella.

A celebration of her life will be held Sunday, October 27th, at 2 pm at the Ocean Institute, 24200 Dana Point Harbor Dr., Dana Point, CA 92629. Donations may be made in Rhoda’s honor to The Ocean Institute Ocean in Motion Program https://www.ocean-institute.org. Condolences for the family may be sent to louise@louiserafkin.com.