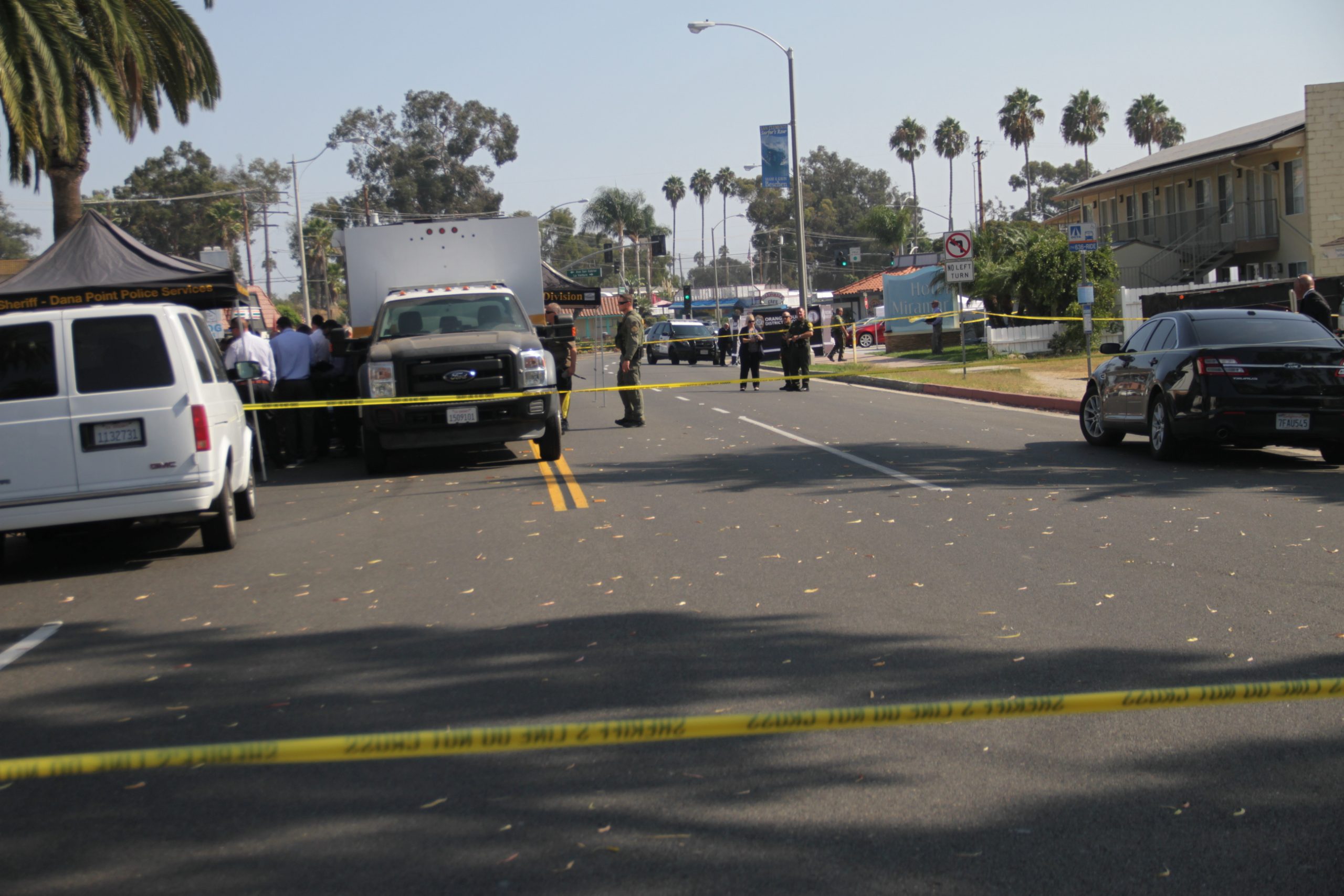 The video that the Orange County Sheriff’s Department (OCSD) released on Wednesday, Feb. 17, as part of the ongoing investigation into the Sept. 23 shooting, offers new details and insight into the confrontation between police and Reinhold, who is believed by authorities to have reached for an officer’s firearm during the daytime altercation that ensued on S. El Camino Real.

In the first portion of the 12-minute video that OCSD referred to as a Critical Incident Community Briefing, the two deputies who were part of the department’s homeless outreach unit can be heard speculating whether Reinhold was going to jaywalk.

Reinhold, who reportedly had been suffering from mental illness and battling intermittent homelessness in recent years, had just purchased some snacks from a local liquor store and was standing at the southwest corner of Avenida San Gabriel and El Camino Real.

“Look at this … watch this, he’s going to jaywalk,” one of the deputies tells the other, as they were parked in a patrol vehicle outside of a 7-Eleven convenience store, on the northeast corner of the intersection—just across the street from the liquor store.

Reinhold is then seen heading northbound, along El Camino Real, and begins to cross San Gabriel before stopping in the middle of the intersection and walking back. It’s unclear what the status of the crosswalk was, but the footage shows the traffic signal for southbound and northbound motorists turning yellow, then red, just as he had reached the center of the intersection.

“Here we go,” one officer says as they begin to relocate their squad car to stop Reinhold. Moments later, an officer observes Reinhold’s abrupt change in direction, stating, “He just stopped in the middle.”

The two continue to talk, but parts of the conversation, throughout the video footage, is inaudible—a point Sgt. Dennis Breckner, OCSD spokesperson, noted at the start of the briefing.

“It’s not case law,” the other officer responded.

A public records request with the department this past December revealed that the two officers involved were Eduardo Duran and Jonathan Israel.

The officers pull up next to Reinhold, who was standing near the corner of the intersection again, just outside of the liquor store and an adjacent flower shop.

“What’s going on, man? How you doing? How you doing?” one officer said, greeting Reinhold, who is no longer in view, as the dashcam is pointed southward, away from the interaction.

For the remainder of the video footage, the officers and Reinhold can be heard heatedly arguing, with the deputies instructing Reinhold to stop walking and to sit down, while Reinhold repeatedly asks why he’s being stopped.

When the officers told him that he had been jaywalking, Reinhold asked them to explain when and where the alleged violation had occurred. The officer is heard telling Reinhold, “There”—and that it happened after leaving the liquor store, later noting the adjacent crosswalk. An exasperated Reinhold then called the jaywalking accusation “ridiculous.”

OCSD’s briefing video later shows previously released cell phone and security cam footage of the argument that escalated into the altercation and moments later resulted in the shooting that killed Reinhold.

Authorities included security footage from Hotel Miramar to point to the moment in which Reinhold appears to reach for one of the officer’s firearms. During the altercation captured by a witness’s cell phone, the officer can be heard yelling, “He’s got my gun.”

Attorneys representing Reinhold’s family, who recently filed a wrongful death lawsuit against the county, have argued that any contact Reinhold made with the officer’s gun was purely coincidental.

In response to the new footage, the Reinhold family’s attorneys on Wednesday accused the officers of using “pretext reasons to stop anyone for any reason they want, simply to harass the person.”

“These officers created and escalated the confrontation with Kurt Reinhold causing his death,” attorney John C. Taylor said in an emailed statement. “Mr. Reinhold wasn’t in distress and didn’t pose any danger to himself or anyone else. If he wasn’t a Black man, this stop never would’ve happened, let alone the shooting that takes his life.”

The lawsuit alleges that the two deputies escalated their encounter with Reinhold, using excessive and unreasonable force against him.  The suit also argues that the deputies violated the late Reinhold’s Fourth Amendment protections from unreasonable searches and seizures, and that the county’s training polices are inadequate in addressing certain circumstances.

Fellow attorney Neil Gehlawat pointed to the deputies’ conversation prior to the stop as evidence that OCSD’s “Homeless Outreach Unit is nothing more than a facade for disproportionately targeting minorities and using excessive force against them.”

Gehlawat also criticized the release of the video as an attempt by OCSD to defend its deputies’ conduct, rather than “improving policing in their community.”

The Orange County District Attorney’s office is currently conducting an investigation of the shooting and the deputies involved “to determine whether their actions were within the law,” according to Undersheriff Jeff Hallock.

OCSD, he said, is conducting a similar internal investigation “to determine if the actions of the deputies were within policy and consistent with our training. A third investigation, handled by OCSD’s homicide detail, looks into “the criminal conduct of any potential suspect prior to or during the incident.”