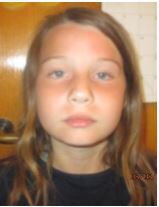 Orange County Sheriff’s Department (OCSD) is looking for a missing 11-year-old girl who was last seen in San Clemente about 10:30 p.m. on Thursday, Sept. 6. The girl is said to possibly be accompanied by her biological mother, Sera Fina.

OCSD officials on Saturday said she was missing from a foster home in San Clemente, after speaking with guardianship officials privy to the incident who released the information.

The girl they are searching for is Kaia Fina, who was reported missing the morning of Friday, Sept. 7. The OCSD report described her as 5-foot-0, Caucasian, about 80 pounds with blond hair and blue eyes. She may be wearing a black T-shirt or white tank top with pink pajamas, and she is not a native of San Clemente.

Kaia is believed to be last seen at her foster home in San Clemente on Thursday. Her foster mother was the person who reported her missing.

The biological mother, age 42, is described as 5-foot-7, 130 pounds, brown hair and green eyes. She may be driving a black 2007 BMW X3 with the California license plate number 7RRY771.

According to public affairs official Carrie Braun of OCSD, the department’s homicide investigators are looking into the case, which is standard with missing persons cases, and investigators are asking for the community’s help to bring Kaia “back to safety as soon as possible,” she said.

“It’s possible that she’s not with Sera, and we’re asking people to call dispatch if they do know where she is,” Braun said on Saturday evening, Sept. 8. “We need to be open to the possibility she’s not with her mother because we haven’t been able to contact her (biological) mom.”

Braun said there has not been an Amber Alert issued because law enforcement officials need to know that a child has been abducted and the car information; however, OCSD has published information on the matter through social media since Friday, asking for the public’s assistance.

Braun also said the public needs to know Sera was not authorized to have custody of Kaia at the time she was reported missing.