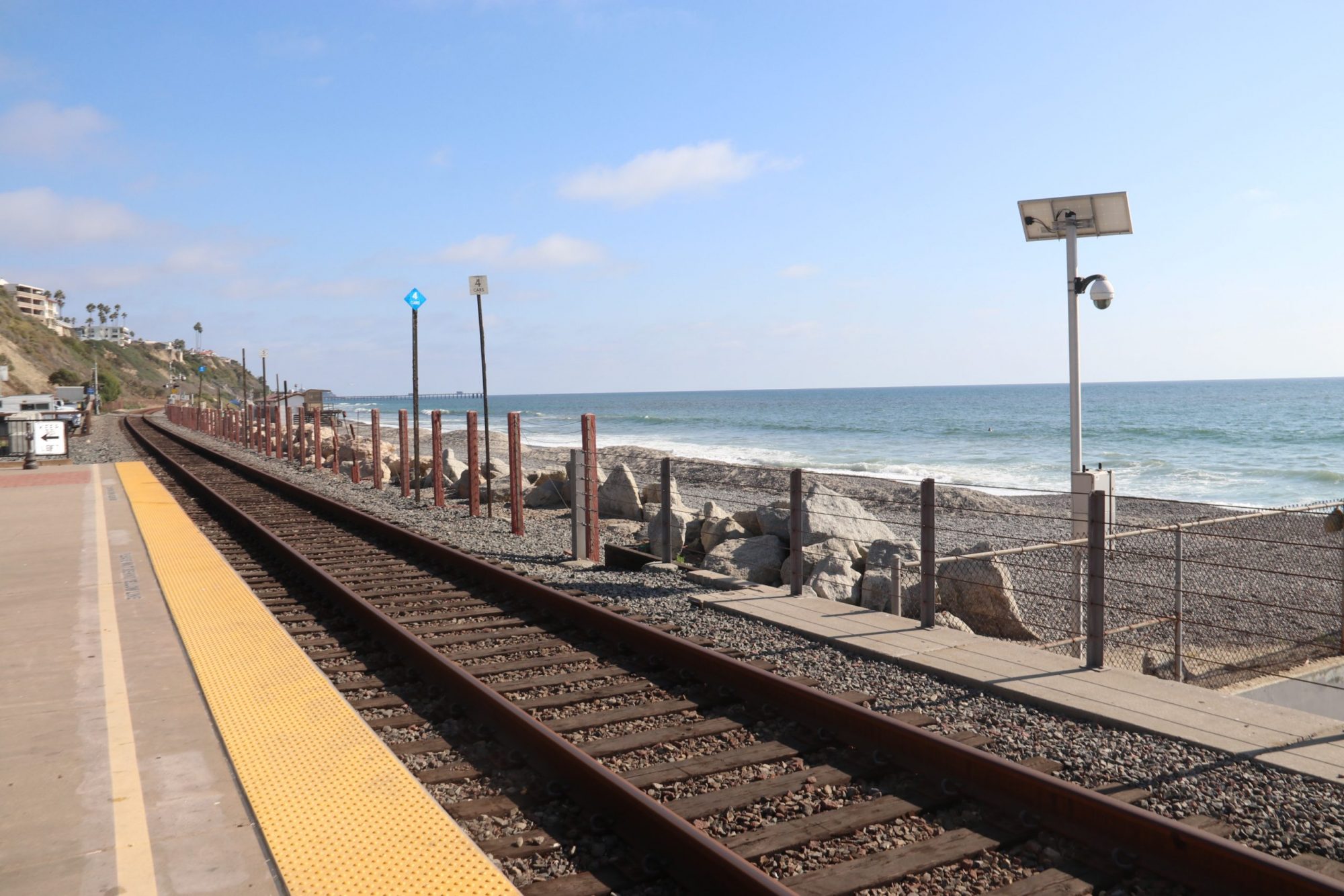 Train stops in San Juan Capistrano and San Clemente were devoid of people waiting to board on Monday, Oct. 3—a marked shift from the usual sight of travelers around the South Orange County stations.

That absence followed the decision by Metrolink and Amtrak Pacific Surfliner late last week to halt train services between South Orange County and Oceanside until further notice because of movement on the track.

In a special meeting on Monday, the Orange County Transportation Authority Board of Directors issued an emergency need for railroad track stabilization in southern San Clemente, paving the way to begin a $12 million construction project.

“The Board vote clears the way for CEO Darrell E. Johnson and OCTA staff to take the quick and necessary actions needed to secure a contractor and move forward with work to stabilize the gradually sliding hillside next to the rail line, which would allow for safely restoring passenger service through the area,” an OCTA news release said.

The track work, which is still being finalized, will involve driving large metal anchors into about 700 feet of the slope adjacent to the railroad track to prevent it from pushing the track further toward the coast.

Ground anchors are typically effective in preventing soil movement by installing the steel cables diagonally into the bedrock beneath the slope, OCTA said.

“A timeline for completing the work is still being determined, but clearing vegetation and staging for the emergency work is anticipated to begin this week, with installation of ground anchors beginning as soon as possible,” OCTA continued.

Caltrans also declared the situation a state transportation emergency, and the California Transportation Commission held a special meeting that resulted in the CTC allocating $6 million from the State Transportation Improvement Program for the track stabilization, according to OCTA.

“Our first priority, of course, is the safety and well-being of all rail passengers and crew members who travel through this area,” said Mark A. Murphy, OCTA chairperson and mayor of Orange. “This quick action by our board and the state will allow us to move forward with a more effective interim solution to prevent the tracks from moving and to safely restore rail service through this vital corridor.”

Metrolink’s service suspension between the Laguna Niguel/Mission Viejo station and the Oceanside station began on Sept. 30 because of continued movement of the rail line in south San Clemente, just below the Cyprus Shore community, where strong waves routinely crash at the bottom of the bluff.

Metrolink spokesperson Scott Johnson said the agency will continue to “monitor the area and, if needed, will take additional steps to protect the rail infrastructure.”

Amtrak Pacific Surfliner services are suspended between the Irvine station and the Oceanside station, with no stops in San Juan Capistrano or at the San Clemente Pier. Bus connections will be provided between Irvine and Oceanside.

The stabilization work will likely take 30 to 45 days to complete, at which time passenger rail service will be allowed to resume. Until the emergency work on the slope begins, additional riprap (rocks and boulders) is being placed with the goal of further securing the existing revetment.

“OCTA continues to work with state and federal officials to secure all necessary funding to pay for the emergency construction, estimated at $12 million overall,” the agency said.

The agency also continues to “review long-term options for protecting the rail line in this area and throughout the coastal region and will seek input from the public and all stakeholders as it continues to study the issue.”

“Over the past year, Metrolink has placed more the 20,000 tons of rock and boulders along this area to secure the right of way,” Johnson said. “We are working with our partners at OCTA and LOSSAN (the Los Angeles-San Diego-San Luis Obispo Rail Corridor) on additional mitigations.”

The geological implications of the train service interruption and core impacts to local bluffs have not gone unnoticed by Surfrider Foundation, the San Clemente-based environmental advocacy nonprofit.

Stefanie Sekich-Quinn, senior manager for Surfrider’s Coast and Climate Initiative, said the situation makes it imperative to realize that people have “built way too close to the coast” over the past 100 years.

“Because of this, there is an increased vulnerability along our coastlines and especially now, as we are seeing stronger south swells and incremental sea-level rise,” Sekich-Quinn said. “Secondly, and most important, is that bluff erosion is a natural occurrence that has been happening for centuries, continues today and is one reason why we have sandy beaches in these spots.”

Sandstone and earth crumble from the bluff and fall to the beach below, contributing to the sandy shore that “we know and love,” Sekich-Quinn said.

“Without this process, many beaches become much narrower and may even disappear over time. The fastest way to lose a beach is by building seawalls,” Sekich-Quinn said. “Not only do seawalls remove a natural source of sand, they also fix the back of the beach by preventing the natural migration of the shoreline.”

Further blufftop erosion can be prevented by ceasing all development on blufftops, Sekich-Quinn said.

“In hindsight, this should have been done decades ago,” Sekich-Quinn said. “Secondly, geologists and public officials have long warned of the high potential for bluff failures, especially where there is increased runoff from irrigation or other water accumulation. Finally, in places where feasible, vulnerable infrastructure should be removed out of harm’s way.”

Though beach replenishment might help slow down wave action, it should also be acknowledged that sand supply has been impacted by upland development, which blocks the natural flow of sand to the beaches, Sekich-Quinn said.