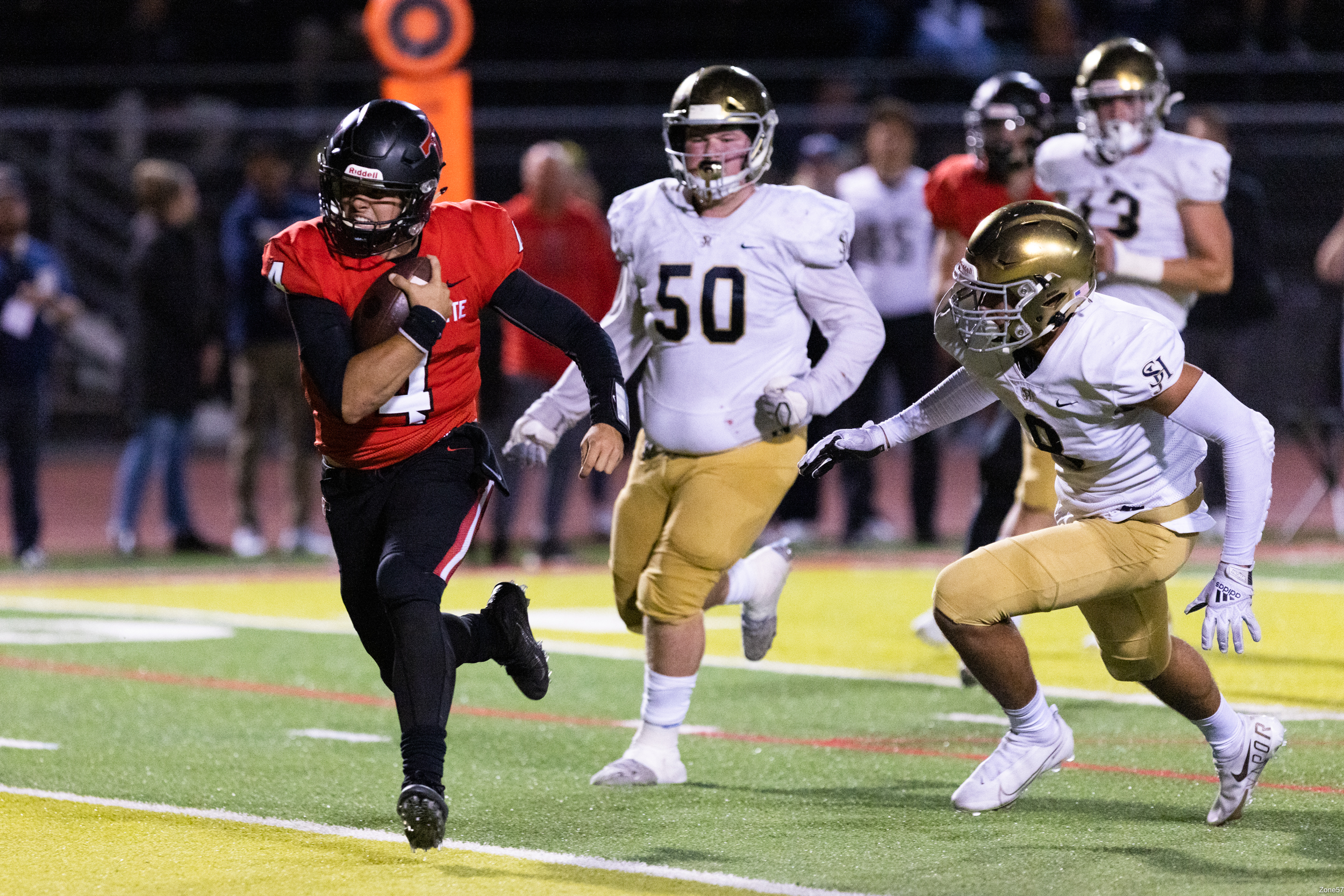 And just as it has been every season since that 2016 return, the final game of the regular season is between the South Coast League’s top two title contenders: the San Clemente Tritons and the Mission Viejo Diablos.

For nearly two decades, Mission Viejo’s trips through the South Coast League were simple marches toward another league title coronation, with games such as the Tritons’ 7-6 loss on a missed extra point in 2005 or the Diablos’ last-second field goal to secure a 31-31 tie in 2007 mere speed bumps on that road to glory.

However, over the previous three seasons, the Tritons have injected some energy and spice into what had previously been a one-sided rivalry.

San Clemente had the audacity to actually beat Mission Viejo. In fact, the Tritons have now won two of their past three games against Mission Viejo—San Clemente’s first wins against the Diablos since 1999—and both have come in dramatic fashion.

In 2018, San Clemente beat the Diablos with a 21-20 win fueled by a backup quarterback and a final-minute, two-point conversion stop. Mission Viejo exacted some revenge in a 38-6 win in 2019, but in the spring last season, the Tritons won again as the clock ran out with a last-play field goal for the 10-7 win.

Make no mistake, those losses have stuck in the craw of Mission Viejo and Diablos head coach Chad Johnson. Mission Viejo has been on a warpath most of this season, and the Diablos will once again bring a vaunted offense to this matchup.

Mission Viejo has scored fewer than 30 points only twice this season: a 44-7 loss to nationally ranked Servite and a 27-10 win over highly CIF-SS-ranked Sierra Canyon of Chatsworth. The Diablos are potent thanks to the return of all of their offensive stars. Junior quarterback Kadin Semonza has completed 69% of his passes for 1,982 yards and 21 touchdowns. Junior receiver Mikey Matthews has caught 49 passes for 659 yards and eight touchdowns. Senior running back Kenny Manassero has rushed 97 times for 602 yards and nine touchdowns.

However, San Clemente would be quick to point out that Mission Viejo was similarly explosive on offense last season, but the Tritons held that group to 10 points in the spring.

San Clemente enters Friday’s game with an offense that came fully back to life against Tesoro last Friday, Oct. 22. The Tritons beat the Titans, 49-35, as senior quarterback Lachlan Van Rosmalen ran for four touchdowns and 94 yards on just six carries. Van Rosmalen also completed 15 of 25 passes for 172 yards and a touchdown. Junior Thomas Hartanov stepped up at running back for an injured Blake Allen with 19 carries for 137 yards and a touchdown. Junior Reid Kotiranta caught six passes for 87 yards, and senior Easton Cattich caught the lone touchdown pass.

Friday’s game will also represent the last data point for San Clemente and Mission Viejo, as the two attempt to solidify their digital resumes in the calpreps.com computer power rankings. The calpreps.com rankings are the major component for CIF-SS’ new playoff system, in which the playoff division won’t be revealed until brackets are released on Sunday, Oct. 31.

This season, in a further attempt for competitive equity in its playoff brackets, CIF-SS is basing its playoff divisions completely on the results of this current season with the help of the calpreps.com algorithm. In previous seasons, teams were placed in divisions ahead of the season based on results from the previous two seasons. However, many felt these divisions weren’t fair, as the system didn’t take into account graduation losses or transfer additions, meaning teams could be ranked too high or too low based on their current situation.

Now, everything is based on these current-season results. A peek at the current calpreps.com rankings reveals the stakes some teams are playing for on Friday, and what role these power rankings and CIF-SS have in some teams’ playoff fate.

Division 1 will be at least an eight-team bracket, with the possibility of a nine- or 10-team bracket. Once Division 1 is selected, the rest of the divisions will be separated based on the number of total automatic playoff qualifiers, with eligible at-large teams selected within certain groupings to complete 16-team brackets.

For San Clemente and Mission Viejo, things stay quite simple. A win for Mission Viejo keeps the Diablos in Division 1, but it’s also possible a loss wouldn’t knock them out of the top group, either. San Clemente is also unlikely to move from Division 2, win or lose, but the Tritons could improve seeding to possibly get a first-round home game.

Either way, the rest of it is out of their hands, as the season comes down once again to the Tritons and the Diablos.