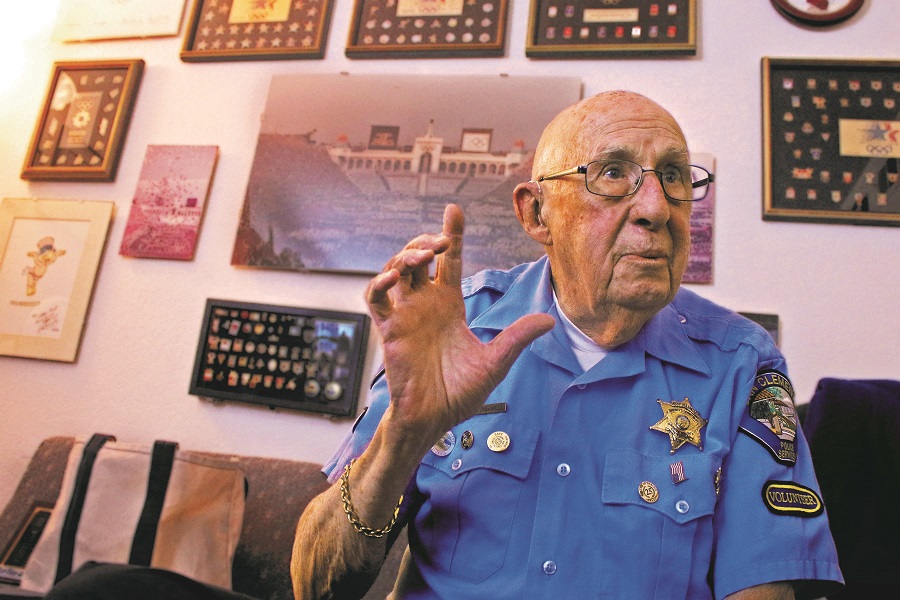 Photographer and RSVP member Neil Barbanell has borne witness to more than a few exclusive moments in history, not to mention having led a life full of adventure. But after 80 years of volunteer service, 28 of which he dedicated to the Retired Senior Volunteer Patrol, the 91-year-old is hanging his hat.

“I am very honored,” said Barbanell, who celebrates his retirement from RSVP this May. The San Clemente man contributed a total of 11,500 hours to the patrol service that assists the local Sheriff’s department.

He worked his last assignment on Saturday, May 4 at the Cinco de Mayo celebration at Max Berg Plaza Park. Barbanell said he is losing his hearing and is no longer physically strong enough to perform his duties.

He will be missed.

“He is like an institution to the institution,” said Lou Leto, recruitment quartermaster for RSVP.

Barbanell has served as the patrol’s dedicated photographer since he joined RSVP in 1990, taking shots for all of the group’s events, activities and awards ceremonies. “He has always unselfishly volunteered his time in his photographic skills,” Leto said.

Born and raised in Los Angeles, Barbanell’s penchant for volunteer work began when he joined the Boy Scouts in the late 1930s, an outfit he remained involved in for some 25 years. Earning a degree in photography from California State University, Long Beach, Barbanell enlisted in the U.S. Navy and served from 1950 to 1954, where he worked as an aerial photographer. His skills took him all the way to the White House, where he was tasked with photographing the inauguration parade for President Eisenhower.

Barbanell recalls a time he was instructed to capture close-ups of Navy amputee victims. In the White House, the ambitious young photographer had the nerve to put a hand on the President’s shoulder and ask him to move over “just a bit,” so he could get a better shot with his lens.

He was quickly reprimanded by the President’s Secret Service. “They said, ‘Don’t. You. EVER. Do that again!’ ” said Barbanell, laughing as he told the story.

While serving in the Navy, Barbanell married his wife, Etta, a Holocaust survivor, and the couple had a son. While he went on to start his career working for Wyeth Pharmaceuticals (formerly called Wyeth-Ayerst Laboratories, later bought out by Pfizer in 2009), Barbanell’s volunteer work never waned.

Barbanell was a Scoutmaster for his son’s troop when his family lived in Monterey Park. He then joined the Freemasonry, serving as a member for 50 years and attaining the fraternal organization’s third and highest grade of Master Mason. Fascinated by cowboy and Indian lore, Barbanell also served three years as a volunteer for the Autry Museum of the American West in Los Angeles.

In 1979, Barbanell and a work friend heard the Olympics were coming to Los Angeles, so the two jumped on the opportunity to volunteer. They joined three others at a makeshift office space next door to the UCLA campus and got started by licking envelopes. The group would become the first of thousands of volunteers to help organize the 1984 Summer Olympics. Barbanell served as a U.S. Olympic Committee volunteer for six years, dedicating a total of 5,000 hours.

For 15 years, Barbanell volunteered with the U.S. Coast Guard Auxiliary as a “vessel examiner.” He offered up his own boat to scour the ocean, conducting safety work and rescues if needed. But when another company took over the boat rescue scene, Barbanell revealed, “In 15 years going out on patrol, not once did we ever get a rescue.”

Barbanell volunteered for three years doing traffic control for the Los Angeles Marathon. “Nothing exciting; I just took an intersection,” he said.

A former boss who had gone to work for the Archdiocese of Los Angeles gifted Barbanell the opportunity of a lifetime. Barbanell found himself without hesitation as an escort driving behind the “Popemobile” during Pope John Paul’s visit to LA. “That was one of the major highlights of my life,” he said. “Here I am driving the Pope through Los Angeles . . . and I am Jewish.”

Barbanell moved to San Clemente in 1990 to retire. He joined RSVP the same year and for six years served as its coordinator.  Barbanell has a son, who lives in San Clemente, a daughter in Thousand Oaks, four grandchildren and “a wonderful girlfriend.”

After suffering a couple of bad falls, Barbanell said standing too long hurts his back. “I have to take it easy,” he said. His hearing has also declined to the point where he can’t understand the conversations coming in over the radio.

He recalled one time when he and another RSVP volunteer member had to call Sheriff’s deputies for backup, because an angered resident threw a brick while the two were on patrol together conducting a street sweep. Luckily, the brick missed.

“When you hear us on the radio, the deputies don’t waste any time because we can’t protect ourselves,” said Barbanell. “We don’t carry guns, we don’t carry handcuffs, and we don’t have a mallet.”

Lt. Edward Manhart, Chief of San Clemente Police Services, said he knew Barbanell while he worked on patrol from 2004 to 2011 as a deputy before he was appointed chief in March.

“He was always taking pictures,” Manhart said. “He always had a smile on his face and was always a great guy to be around.”

Manhart said he cannot express how important it is to have RSVPs around.  “They are volunteering their time away from family and friends to serve the community, and that is outstanding. I will always welcome volunteers who want to do that. We utilize their assistance as much as possible,” he said.

Asked why he volunteers so much, Barbanell said, “It’s just something in me. . . . I like to be around people. . . . If RSVP didn’t want me, I’d probably go to the hospital and push a wheelchair.”

Though Barbanell’s volunteer charisma, good humor and zest for life may be matched by few, he looks forward to seeing the next generation of those willing to lend a hand.

But he says that may require a little discipline. “Put the cell phone down for a few hours, get outside and do something,” he said.