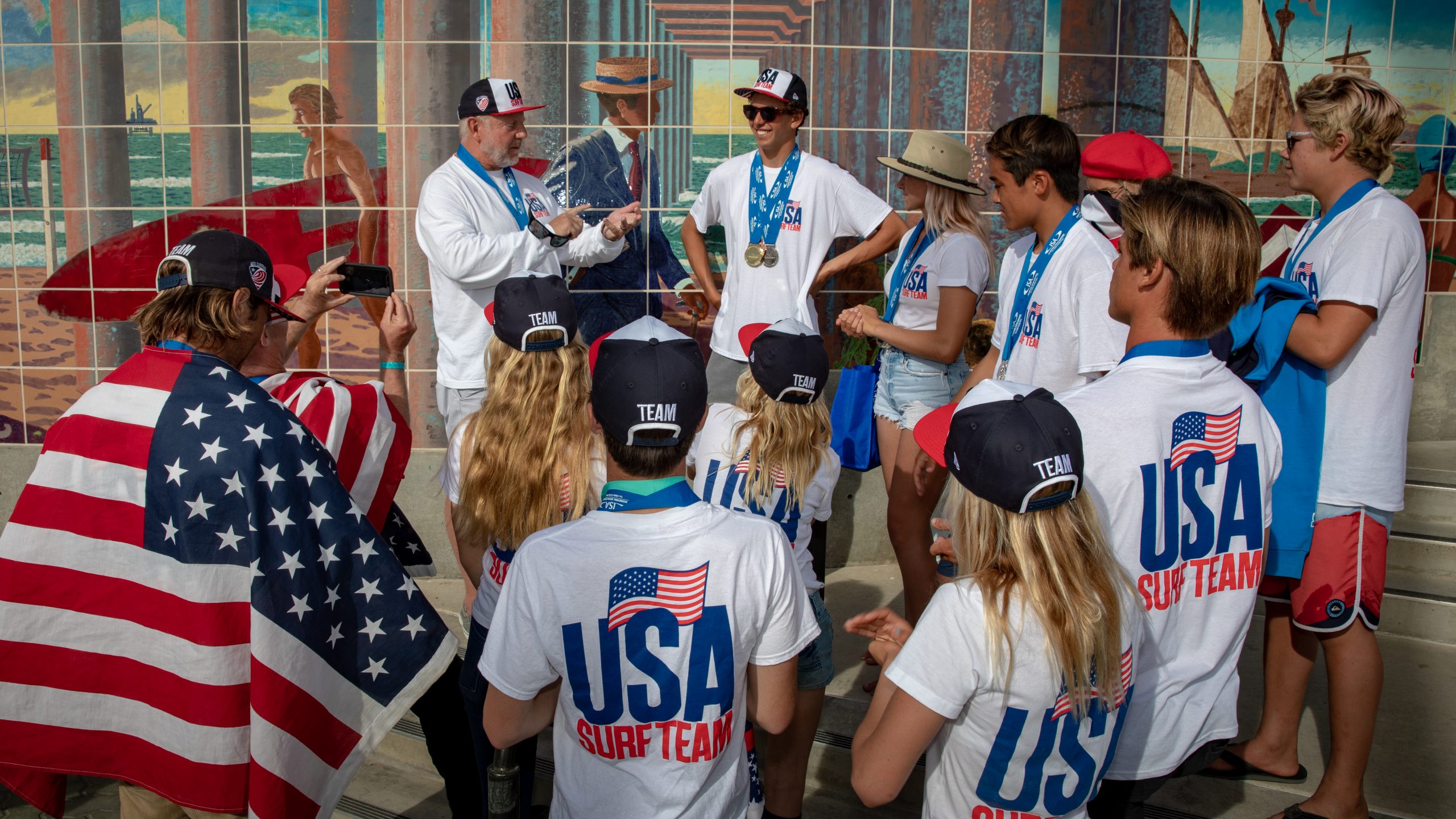 For San Clemente’s Greg Cruse, 2020 was supposed to be the culmination of a life’s work. He was supposed to lead the first-ever United States Surf Team in their Olympic debut at the Tokyo Games. Then came COVID-19, and everything changed.

Undeterred, Cruse, the CEO of USA Surfing, the governing body of the U.S. surf program, has made good use of the year-long break. The Olympic team, comprising San Clemente residents Kolohe Andino and Caroline Marks, as well as World Champs Carissa Moore and John John Florence, has come together more under Cruse’s leadership.

And the coaching staff, led by former U.S. Open winner Brett Simpson, continues to work with the surfers who are bound for the Tokyo Games next summer, as well as the up-and-coming talent emerging from around the country.

Of course, none of this has been easy. Cruse will be the first one to tell you that all of this has been a lot of work, as is anything worth doing. San Clemente Times caught up with him last week, and here’s what he had to say:

It’s been a crazy year, obviously. Can we start with a status update on the U.S. surf program and the Olympics?

Sure, let’s start with the Olympics and work our way backwards. Obviously, the postponement was a huge disappointment for everyone. But it actually has been a little bit of a silver lining for us, because we had some athletes that were still dealing with some injury issues. John John (Florence) was rehabilitating his knee after surgery—even though he jumped into the Pipe Masters to seal his spot on the team. And Kolohe (Andino) had his nicks and dings, as did Caroline Marks. So, everybody’s healthy now, and that’s a silver lining.

Do you think the Olympics could be postponed again next summer?

They’re definitely running the Olympics, according to everyone that I’ve spoken with. Whether there’ll be spectators allowed, I think that still has yet to be determined. They’ve put together some pretty strict protocols for going over there and training.

Will there be a time when the team can go over to Japan and train for the Games?

The team definitely needs to spend some time together. And everyone needs to work on boards. I’ve already talked to Matt Biolos about it. Three of the four surfers on the team ride Mayhem shapes. Hopefully, he will be allowed to come and work on some equipment with everyone.

And then we can all leave some boards there at our house for the Olympics, so everyone doesn’t have to travel with all their boards. That’s the idea, but whether the schedule works out or whether we can get everyone together or not, we’ll see.

When it’s time to travel to the Games next summer, do you have an idea of what that looks like?

This is going to be a new experience for everyone, including the surfers. Most of them haven’t spent that much time in Japan. None of them have been in an Olympics, which is a whole different level of security and craziness that goes with it. Then you add all the COVID-19 protocols and precautions.

It’s going to be a strain mentally on them, so my job, as I view it, is to reduce that as much as possible and make sure they’re comfortable, acclimated, have everything they need and that they’re ready to perform at their best.

Shifting gears, we have a lot of local kids around here who are part of the Junior and Development teams. What’s the status of those programs?

Unfortunately, for the first time, they didn’t have the ISA World Junior Surfing Championships this year. We had a few kids age out that didn’t get to compete when they’re at the top of their age group.

But we’ve continued to hold some training events and things of that nature. And we’re working on some events for next year, so trying to move forward as best we can. We definitely have some good stuff to look forward to next year.

One of the things that we’re going to be doing as an organization is focus on developing surf talent and providing them with the support and structure they need to get to the next level and accomplish their dreams. There are a lot of good surfers that don’t have the sponsored resources to do a lot of this stuff, so we want to nurture them. That will help us diversify the surf world. We can encourage surfing for anyone that shows an interest and bring them along the path. We want to reach underserved markets.

Look at what’s happened in the adaptive community. We started at the Western Surfing Association and then carried on into the USA Surfing Championships. Now we have a full-blown adaptive team and adaptive training program.

Before we go, just want to get your take on what surfing in the Olympics means to you?

I think it’ll be cool. And I think everyone involved in it wants to show the true authentic, beautiful nature of the sport. They’re going to keep it core. I can’t wait.