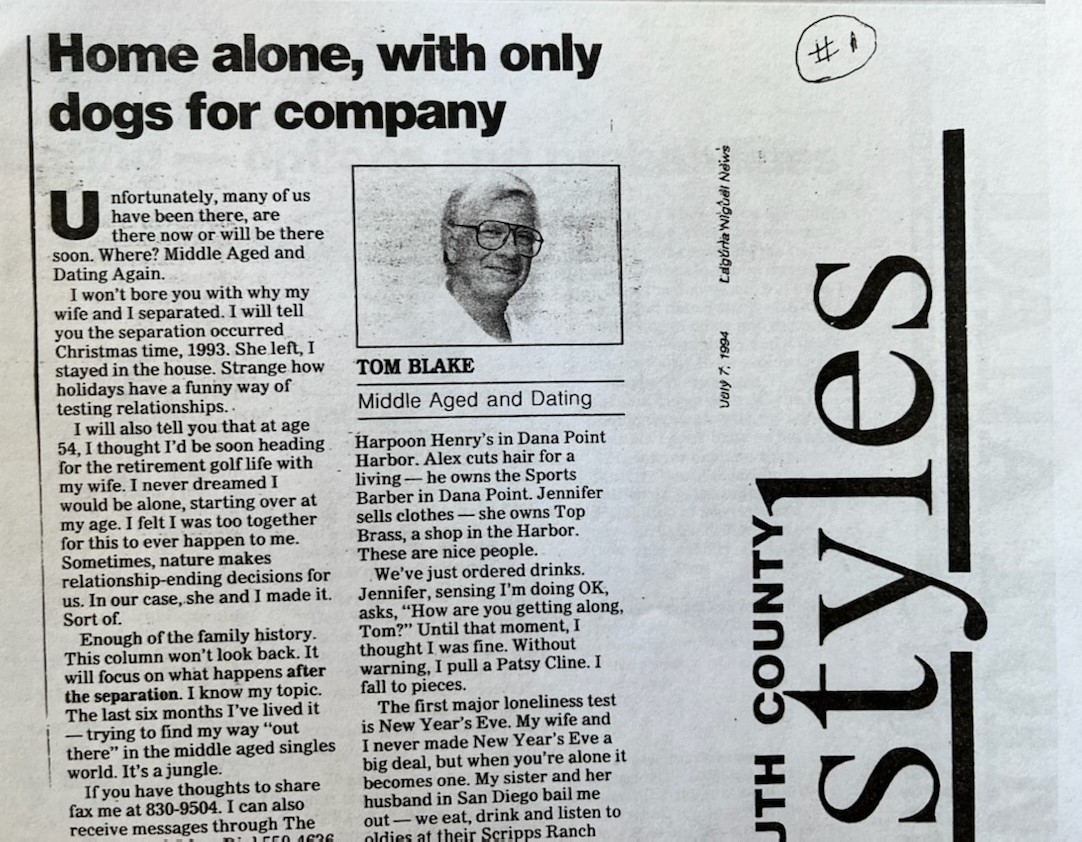 On Life and Love After 50: How the Dating Scene Has Changed in 28 Years

This week, I came upon my first newspaper article, which was published on July 8, 1994, in the Laguna Niguel News and the Dana Point News.

The article was titled, “Home alone, with only dogs for company.” When I reread that article, I thought about how dating has changed for seniors since 1994.

The inspiration for writing about dating after 50 was an unexpected move-out by my wife, followed soon by a divorce. I wasn’t a writer then, but I had often kept a journal.

I wrote about the move-out, the divorce, and the unsuccessful attempts to date within the first few months afterward. I had blind dates, first dates, expensive dates, frigid dates, frustrating dates, and last dates. After each date, I’d come home and write the woe-is-me details in the journal.

Five months later, I converted those notes into a 70-page short story. I thought a newspaper or magazine might be interested in my hard-luck story, written from a dumped and newly divorced man’s point-of-view. Two women editors at the Laguna Niguel News and Dana Point News gave me a chance. They thought my articles would agitate but be enjoyed by South County women readers.

At that time, the internet was just in its infancy, so responses from readers were either faxed to me or left on the newspaper’s telephone InfoLine. There were no internet dating sites.

In that first article, I described the middle-aged dating scene as a “jungle.” Not much has changed in that regard; senior dating is still a jungle and even more difficult now.

The biggest changes: the internet, online dating sites, and cell phones. Seniors can cast their nets far and wide to try to find a potential mate, which can dramatically improve their chances of meeting someone.

They can chat and FaceTime each other. However, with the good comes the bad; scammers prey on vulnerable seniors and are a menace to internet dating.

And for the past two years, we’ve had this thing called the pandemic, which has made meeting people face-to-face challenging at best.

Dating terminology has changed. In 1994, there were terms such as breaking up and making out. Now, words including ghosting and catfishing are tossed around.

One of the biggest changes is the ratio of single women to single men. In 1994, that ratio was approximately 1-to-1. But now, as seniors reach 70, 80 and beyond, that ratio is nearly 5-to-1—making dating more difficult for women.

One thing hasn’t changed: networking through friends to meet potential mates is still an important way for singles to find a partner.

Yes, the situation has changed since the middle-aged dating era. We aren’t middle-aged anymore; we’re seniors.

To keep up with the times, I’ve changed my column name from “Middle-Aged and Dating” to “On Life and Love After 50.” I haven’t figured out what the next name will be. Perhaps readers will make suggestions.

In 2013, I changed newspapers from the Orange County Register to the three newspapers that make up Picket Fence Media: Dana Point Times, San Clemente Times and The Capistrano Dispatch. It was the smartest journalism move I’ve ever made. I’m blessed to still be writing for printed newspapers, managed by dedicated, hard-working people.

I am grateful for the 28 years of writing columns. There have been nearly 4,430 columns and e-newsletters written and five printed books published.

Some readers have followed me for nearly the entire time. I appreciate their friendship and support. Together, we will continue to monitor senior dating changes.