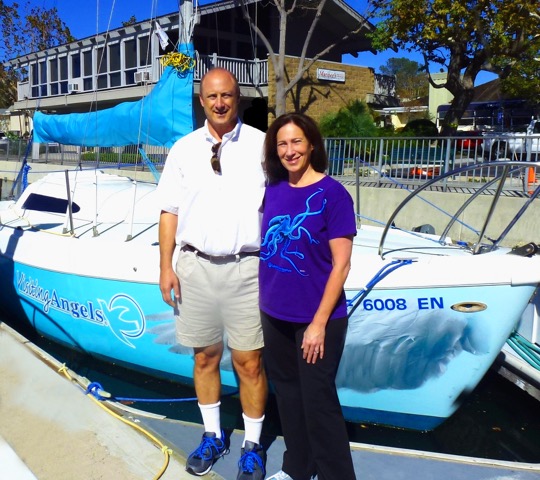 On Life and Love After 50: San Clemente Couple Cares Deeply About the Ocean

You wouldn’t expect two people who grew up in Chicago and now live in San Clemente would have such a deep passion for the ocean and its marine life that would inspire them to start a company to protect it. But that is what David and Pamela Jackson, in their mid-50s, did.

Even though they are both from Chicago, they didn’t meet there. They met and married 17 years ago in Southern California. Their new San Clemente-based company is called EverythingOceans. The company’s purpose is to help the oceans.

Their first product, to be published Nov. 20, is an illustrated children’s book titled, Ocean Adventures with Jax, which will be the first of a series. Pamela is the book’s author and Bonnie Bright is the illustrator. The book is written for children pre-kindergarten through second grade.

Jax, is a smiling, powder-blue, bottlenose dolphin readers will fall in love with. I sure did.

Why the interest in oceans? Pamela grew up frequenting the John G. Shedd Aquarium in Chicago where she became fascinated with marine life. She later moved to California and

graduated from Saddleback College in the aquarium and aquaculture science degree program. She volunteers at aquariums where she teaches people about the ocean and its inhabitants.

“I want to use my knowledge of the ocean’s animals to help children learn more about marine life through fun-engaging ocean adventures,” Pamela said. “If I can help children fall in love with the oceans and the animals that live there, they may grow up wanting to save them. I would like to help cultivate the next generation of ocean stewards through my stories.”

Pamela’s husband David shares her enthusiasm. He said, “It is difficult for people to understand the oceans because they cannot see what is going on underneath the waves. Pamela’s book is written from Jax the dolphin’s point-of-view. Jax describes in the first person what he sees and feels in the ocean. There is a warm, touching story to Jax’s adventure when he gets lost, but he eventually finds his way back to the pod. He befriends a humpback whale named Fluke who helps him.”

As I read the book, I was impressed by the clever way author Pamela weaves in life’s lessons: listen to your parents, pay attention to your surroundings, learn tolerance and recognize the special qualities of others, value teamwork and learn to trust yourself.

She also weaves in scientific information. For example, she explains things simply so children can understand terms such as “echolocation,” the distinct sounds like clicks, whistles and squeaks that dolphins and whales use to communicate and identify the size and location of objects, find food and explore their ocean worlds.

I predict it will become one of those children’s books that youngsters will not forget while growing up.

Pamela said, “I want children to swim through my books.”

Ocean Adventures with Jax will be released on Amazon.com on Nov. 20.

Contact information for Pamela or David Jackson at everythingoceans@gmail.com.

Visit their Got Oceans Facebook page, which already has more than 27,000 visitors.

Hats off to this San Clemente couple for dedicating themselves to saving the ocean and its beautiful marine life.

Tom Blake is a Dana Point resident and a former Dana Point businessman who has authored several books on middle-aged dating. His latest book can be found online at,www.smashwords.com/books/view/574810. See his website at www.findingloveafter60.com. (Yes, after 60. Time rolls on). To comment: tompblake@gmail.com.