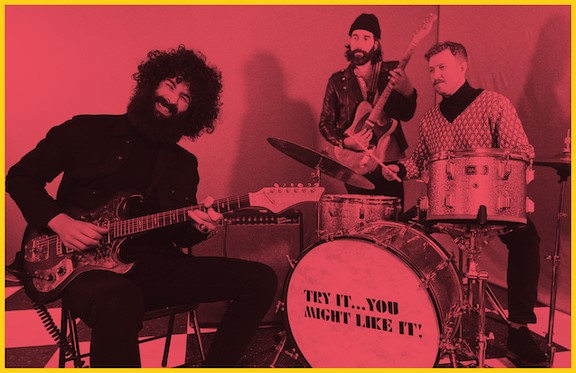 On Stage at The Coach House: GA-20 and JD Simo

Blues acts GA-20 and JD Simo will be hitting the road for a nationwide tour that includes a stop at The Coach House on Nov. 11. In the words of Simo, the trek will involve a lot of record store shopping, coffee drinking, and late-night tacos.

The two acts and friends are co-headlining the show and tour in support of their new musical releases: GA-20 Does Hound Dog Taylor: Try It…You Might Like It! and Mind Control.

GA-20’s new album, released in August, pays tribute to late Chicago blues musician Hound Dog Taylor. JD Simo’s album is set to drop on Nov. 5, and it serves as a follow-up to his self-titled album from last year.

“I can’t wait to play all these new tunes and be in the van with the fellas again!” Simo—born in Chicago and now based in Nashville—said via email. “It’s gonna be rad!”

Simo played at The Coach House in 2019, saying he found everyone was “super cool,” which certainly makes him anticipate returning.

Simo’s upcoming release is his favorite work he’s done so far, and it came about while playing with buddies in a basement. He describes the end result as unlike anything he’s done before, and “as organic as it gets.”

While GA-20 guitarist Matt Stubbs has also previously played at the San Juan Capistrano venue, the rest of the Boston-based band (which also comprises vocalist and guitarist Pat Faherty and drummer Tim Carman) has not.

“The tour starts September 28, and we’re hitting 63 different cities, so this is the biggest tour we’ve done to date,” Stubbs said in an email. “Our new record has been getting a lot of positive reviews and radio airplay, and we can’t wait to play these songs live for everyone. It’ll be a good time, so we hope you join us!”

GA-20 band members have always been fans of Hound Dog Taylor and felt now was the right time for a tribute record, since this is the 50th anniversary of his debut with Alligator Records and for the record label itself, which is co-releasing the tribute album with Karma Chief Records.

As with other acts passing through Orange County and playing throughout the country, the co-headliners are readjusting to being back on stage after the COVID-19 pandemic put a halt to concerts.

“I’ve only done it a few times, and it was like, ‘Oh, yeah, this is so fun,’ ” Simo said. “I’d kind of compartmentalized the feeling, and now to feel it again, it’s quite a new thing. It’s a different kind of feeling, having had to give it up. I had no idea it could happen, but it’s actually even more special now!”

What: GA-20 and JD Simo concert at The Coach House