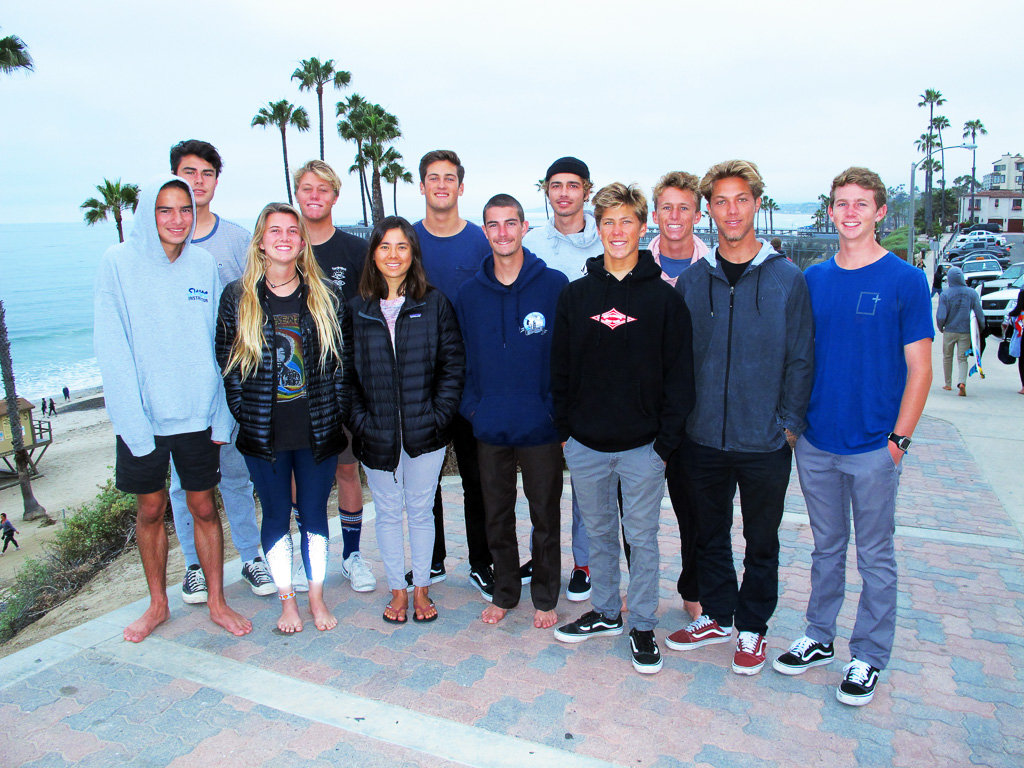 It’s another gray morning at T-Street, but the water’s glassy and a few pick-and-choose corners are popping up on the inside. Eighty-pound kids are whipping tight arcs and launching air reverses into the flats. Watching from the bluff, the seniors on San Clemente High School’s (SCHS) national-title-winning surf team are milling around, checking the surf and trying to downplay the anxiety of their impending finals this week and graduation next week.

“In my time on the surf team, I think the most important thing I’ve learned is balance,” Erika Hunting said.

She’s not talking about the kind of balance required to perform on a surfboard. Hunting will be attending Stanford University this fall and studying bioengineering (and “maybe a little computer science).” She was named the 2018 Triton of the Year, and as coach John Dowell has pointed out, she’s a big reason solar power will soon be incorporated into all of the high schools throughout the Capistrano Unified School District (CUSD). In her time at SCHS, Hunting founded the Blue Oceans Club to initiate beach cleanups and the Think Like a Mountain coalition to lead the interscholastic charge for CUSD Solar.

“It’s easy to get stressed out with everything at school, and it’s important to take school seriously, but it’s also important to relax with your friends and have fun,” Hunting said. “With the surf team, it’s definitely been great for me all four years to have that and have a place I knew I could come and just be myself.”

After winning back-to-back national titles the last couple of years, this is a graduating class that’s larger, more accomplished and more driven than most. Talking to them at T-Street, all of them noted that they’re bound for higher education. Some will attend community colleges until they find their groove, others are bound for four-year universities. Surfing’s still a large part of who they are and what they do, but some of the wisdom that coach Dowell has imparted on them over the course of the last four years is that there’s also life outside of the water and that time in the classroom can occasionally supersede time in the tube.

“He taught us the importance of being a well-rounded person, not just a surfer,” said Bryce Crane, who has plans to work as a lifeguard through the summer, then attend Pepperdine University in the fall. He’s planning on studying business administration and hopes to become a member of the surf team. He was also the homecoming king this year.

What’s so impressive is that it’s not like these young adults couldn’t have gone and chased the pro surfing dream. They’re all remarkably talented. Coming from one of the premier hotbeds of surf talent in the country, some have enjoyed the support of sponsors throughout their tenure as Tritons. For example, Noah Hohenester has ridden for surfwear brand RVCA since he was 9 years old. Next fall, he will attend Cal Poly, San Luis Obispo and study construction management. He’s also hoping to join the surf team there.

Davi Toledo is another example. His brother, Filipe, is currently in the hunt for his first WSL World Title and is coming off of a massive contest win at the Oi Rio Pro last month. Davi rips in his own right, but he’s heading to Saddleback to study business.

“Being down here, surfing with everyone, especially on contest days, it’s been really special,” Davi said. “Good food, good times, winning everything, that feels good. Now I’ll head to Saddleback and see what happens from there.”

The success stories go on and on. Another local standout, David Economos, will attend the University of California, Santa Barbara in the fall while also committing to the WSL’s North American qualifying series. He plans to study communications, “because it seems like a good way to get a job.”

Zoe Tothier will be attending Brigham Young University in Provo, Utah, and studying graphic design. Elijah Fox is pursuing a meteorology certificate, then hopes to get a degree in meteorology and eventually become a surf forecaster—like his old man, who has forecasted for the Navy.

“I think it would be cool to be a forecaster for Surfline,” Fox said.

A few months back, I was interviewing Andrew Stark, who was the president of Surfing Australia at the time. A massive organization that governs all things surfing down under, Stark explained, “We’re not just trying to produce good surfers, but also good people.”

The same could easily be said for coach Dowell’s program at SCHS. A dominant competitive force on the high school surf scene, as is so evident by his graduating class this year, the program is not just producing champion wave-riders, it’s producing champion humans.