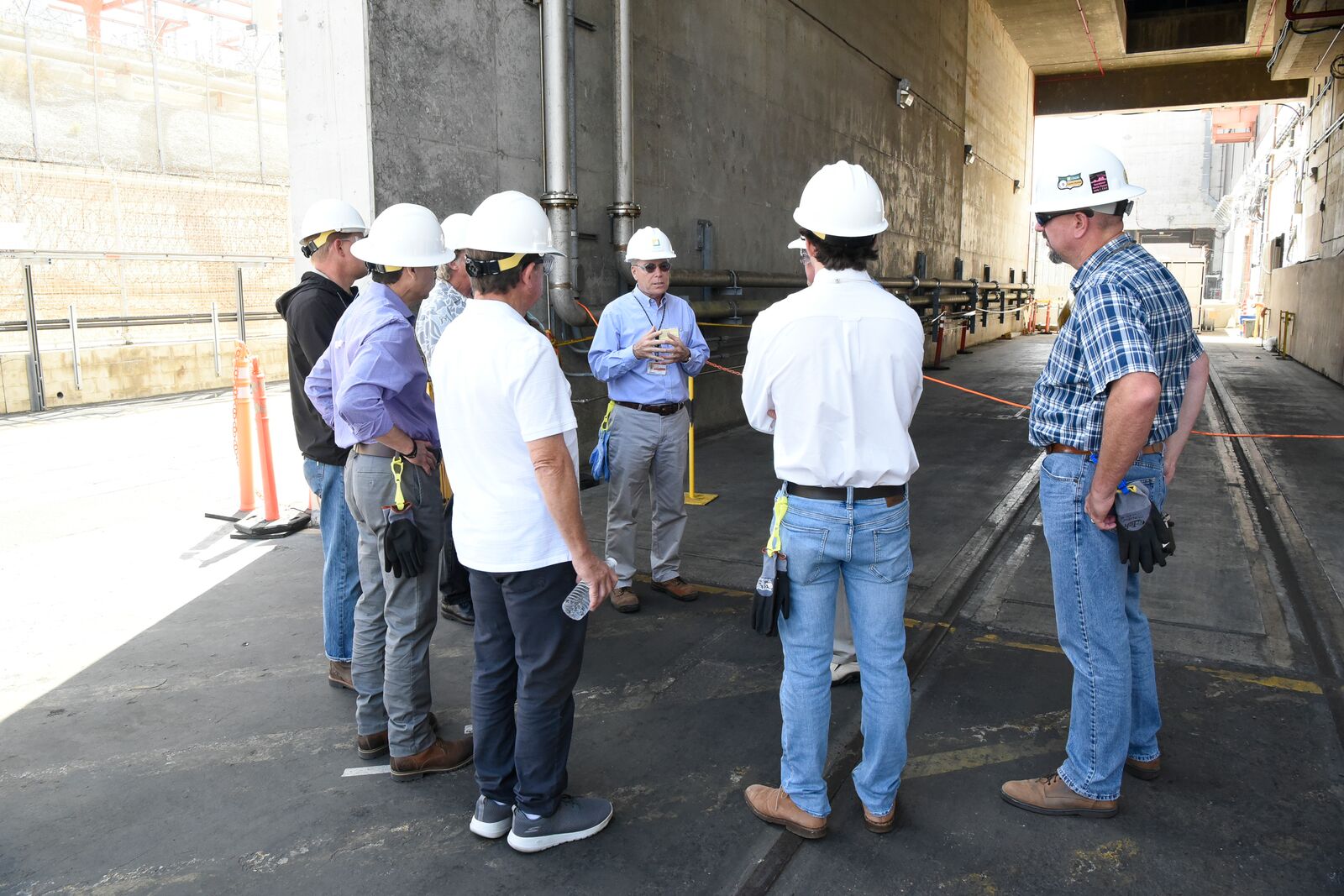 Op-Ed: What’s Next for SONGS? A Surfer’s Perspective from Inside the Offline Nuclear Power Plant

At the start of summer, exactly the time the first south swell was hitting, I headed down to San O, but instead of swinging a right into the lot I went straight—straight into the guest parking for the San Onofre Nuclear Generating Station (SONGS). By a not-so-simple twist of fate, I’d been invited to join a tour of the plant.

Apprehensive and curious, I’ve long wondered what goes on behind the walls there. I was about to find out. Our small tour group in June included San Clemente Green’s Gary Headrick, professor emeritus Dr. Roger Johnson and other locals, as we were checked in at the security office.

Once cleared, we descended into the plant along with a heavily armed security detail. Ushered along by a team of Southern California Edison employees, we were obviously not free to wander.

“That’s classified,” said the head of security when asked about the size of the omnipresent security detail.

As the tour continued and we got closer to the reactors, the conversation turned to the amount of radioactive waste that is emitted by SONGS on any given day. With air vents at the top of both reactor domes and an undersea pipeline, Dr. Johnson pressed the issue.

“We can’t say the number is zero,” explained one of the plant engineers, who was insistent that everything that comes out of the shuttered plant meets all Nuclear Regulatory Commission (NRC) guidelines and rules.

On June 7, 2013, SONGS officially began its decommissioning process. Since that time, 3.55 million pounds of spent nuclear fuel rods have been left to cool in the “pools” inside reactor Units 2 and 3. The rods that are in storage casks on-site at SONGS are now somewhere in the neighborhood of a “more manageable” 400 degrees centigrade after six years. The spent fuel is in the process of being removed from “wet storage” and put into “dry-cask storage.”

The process has already begun in earnest and SONGS is filling a new storage cask at an average rate of one every 10 days. There will be 73 canisters filled and stored on site when the project is complete in 2030. Most of the fuel will be ready or cool enough to be transferred by 2020, and some of it can be transferred now.

Unit 1 was taken offline in 2001, and there are currently 51 canisters of waste from that reactor stored on site.

“There is no real-time monitoring,” we were told. “The storage units are checked for radiation once a quarter and we file a report with the NRC every year. If there was a leak, it would be very small and very slow, and we would be able to address it according to the plans we have in place.”

While we’re literally standing on the platform that will soon hold all of these canisters, the impact of what’s being done took hold.

“The reinforced concrete pad that the canisters are sitting on is about 3 feet above the water table,” we are told.

Keep in mind, the plant was designed around the mean low tideline. Edison boasts that there is a 30-foot seawall protecting the plant in case of a tsunami or other oceanic event, but that measurement is based on the water level at low tide and doesn’t take into account swell activity or sand flow.

The canisters the waste is being stored in purportedly have a shelf life of 20 years, but it was explained to us, “That’s actually just the warranty. They could last as long as 60 or 100 years.”

The biggest problem facing SONGS, as well as other nuclear plants that will be going offline in the coming years, is that there is nowhere to permanently store the radioactive waste. Talks have been ongoing about constructing a storage facility somewhere in Texas, New Mexico, Arizona or Nevada, but at present nothing has been approved.

The other part of the decommissioning process is the actual removal of the two domes that house Units 2 and 3.

“By 2027 or 2029, they will be gone. All that will be left is the stored waste and some infrastructure that’s critical to the power grid,” explained an engineer.

In the short-term, concerned citizens should push for improved monitoring and more transparency, but for now, the actual process of storing the waste on site will proceed unimpeded.

Long-term, the U.S. government needs to address the situation and figure out a way to get nuclear waste out of communities and into safe, secure storage. That’s really where the fight will be in the months and years to come.

Editor’s note: To comment on the decommissioning draft environmental report, which ends at 5:30 p.m. on Aug. 28, submit them to ceqa.comments@slc.ca.gov. To review the EIR, visit www.slc.ca.gov and scroll to the bottom of the page to find San Onofre Nuclear Generating Station (SONGS) Units 2 and 3 Decommissioning Project, DEIR (6/18). Click on that for materials.