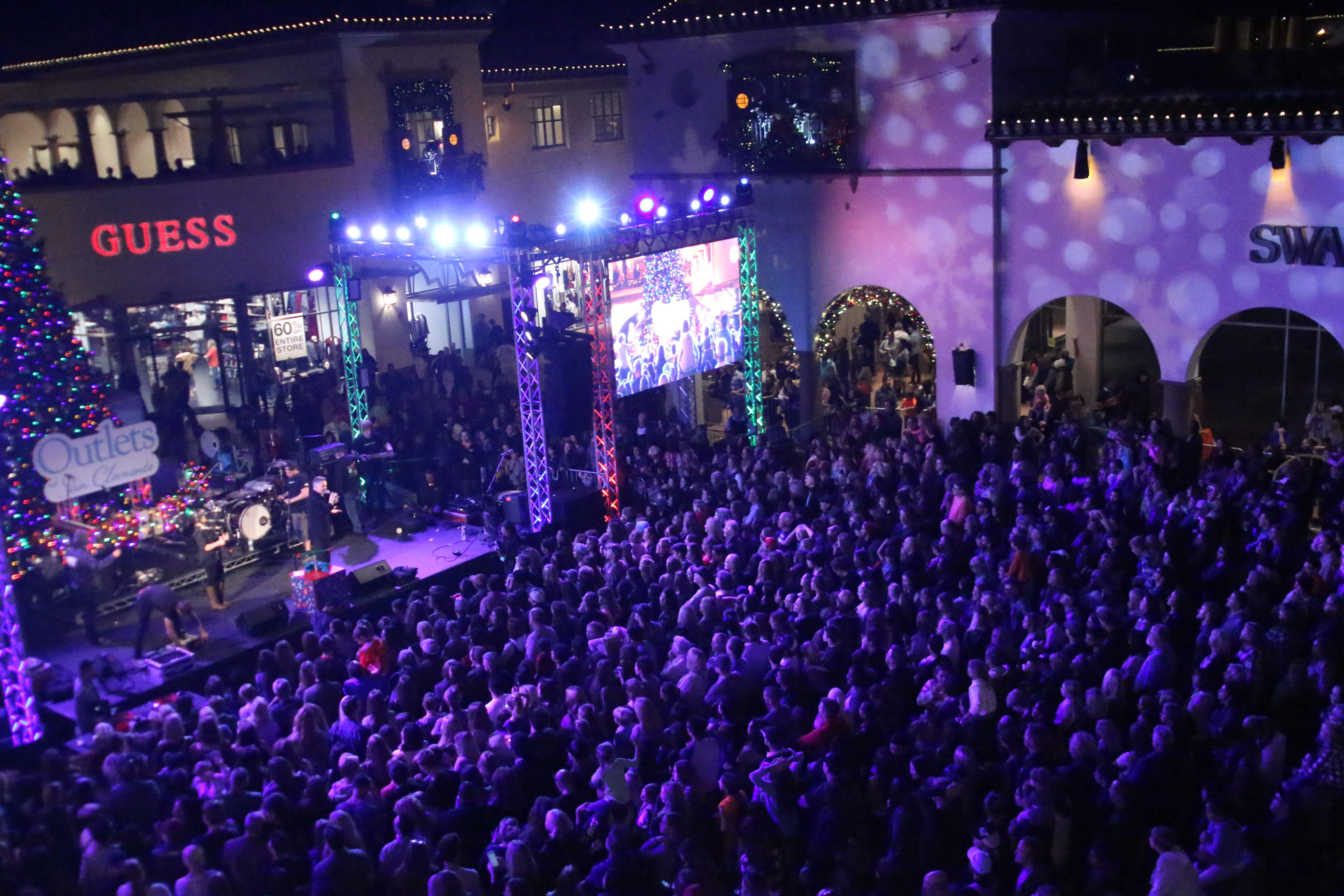 Open for Business: A Look at the Outlets at San Clemente’s Grand Opening

Information, upcoming events and more about the Outlets at San Clemente

Nestled on the bluffs of Marblehead, the Outlets at San Clemente project sat dormant for more than a decade—until last weekend.

The grand opening of the Outlets at San Clemente brings with it multiple facets of commerce and business to San Clemente. Some people have called it one of the biggest economic effects to come to the Spanish Village by the Sea since its inception.

State legislative representatives, Orange County Supervisor Lisa Bartlett, City Council members past and present as well as other notable people were on hand to welcome the Outlets with open arms.

“I think we always felt it was the right project and the right thing to do,” Craig said. “We always believed in it, and we knew there were a lot of hurdles. Candidly, we didn’t expect the last hurdle when Lehman Brothers filed bankruptcy.”

Susan Jennrich, general manager of the Outlets, said the first few days have been going according to plan.

“For the most part, we’re ready,” Jennrich said. “We’ll be sneaking construction people in after hours to finish up final touches, but we’re ready for the public.”

During the Outlets at San Clemente’s Tree Lighting Concert on Saturday, representatives said they estimate more than 7,500 people were present.

“We’ve been so happy with the number of people who have come to visit us,” Jennrich said. “Stores are already talking about meeting sales goals every day. It’s been so fun to see people look around with wide eyes.”

Outlets at San Clemente retailers will open doors at 8 p.m. on Thanksgiving, Nov. 26. Shops will remain open all night and throughout Black Friday on Nov. 27 until 10 p.m. Santa will be onsite from noon to 8 p.m. on Friday, Nov. 27. posing for free photos with children.

A charity fundraiser on Saturday, Dec. 5 10 a.m. to 7 p.m. to benefit 18 local nonprofits. Consumers can receive exclusive discounts on top of daily savings. Tickets are $35 and the Outlets at San Clemente donates $25 to a local nonprofit organization of the shopper’s choice.[/box]

Steve Craig, CEO and president of Craig Realty Group, which built the Outlets, said this has been a longtime project come to fruition.

Phil Palisoul, who has been partners with Craig for more than 30 years and helped with the establishment of the Outlets, spoke during the ribbon cutting ceremony.

“I am confident that this Outlets center will exceed expectations and soon become the special place where we will create memories with friends and family,” Palisoul said. “For over 18 years … we had dreamed of a day like this. Once you’ve had a chance to walk through this wonderful place, you will be so glad that we put in the effort.”

Although it took much longer than anticipated to open, Craig said his team never lost sight of completing the Outlets.

“I think we always felt it was the right project and the right thing to do,” Craig said. “We always believed in it, and we knew there were a lot of hurdles. Candidly, we didn’t expect the last hurdle when Lehman Brothers filed bankruptcy.”

Lehman Brothers owned the land and was an integral part of the development of the Outlets at San Clemente until 2008.

“We couldn’t get anybody to move forward,” Craig said. “The bonding company that provided the surety to do the improvements was post-closing and didn’t come through. So not only did the company fail but the surety that was supposed to guarantee their work failed.

“Eventually,” Craig continued, “we persevered and got to the finish line.”

When asked about any negative reception of the Outlets, Craig said he would like people to see the shopping center for themselves and then make their opinion.

“There’s still a group that is anti-everything (Outlets),” Craig said. “Some of the comments we received were pretty tough, and some people sued us. A lot of money was spent on litigation. And some of them said some pretty awful things, all of which weren’t true.”

During last year’s election season, Craig said the Outlets was a target for contention especially when it came to signage, which is still being discussed.

“They said we’re going to put up electronic billboards that were going to light up your home…it was anything,” Craig said, adding whatever signage comes for the Outlets won’t be invasive.

Last week the Outlets filed an application regarding signage that could be seen from the Interstate 5 freeway, but the details of the application have not yet been made public, according to city of San Clemente officials.

The city has been tackling sign code issues since last year.

As far as food establishments, Panera Bread is now open full-time and the Starbucks is expected to open in November. Auntie Anne’s, as well as Rocky Mountain Chocolate Factory, will open later this year. Ruby’s Diner will open in spring 2016.

Assistant City Manager Erik Sund said there are some city projects that have been planned to be funded with tax revenue expected to generate out of the new shopping center.

“When Vista Hermosa Sports Park was built, the proceeds from the Target property sale helped fund or subsidized operating expenses, but we knew that would run out by fiscal year 2016,” which is the current fiscal year, Sund said. “The plan all along was that Marblehead would be developed and the sales tax from Marblehead and the Outlets will help fund the gap once the subsidy is gone.”

Initially the city had hoped the Outlets would be built sooner, but, as the hurdles Craig explained came into play, tax revenue had to be garnered from elsewhere.

Because sales tax doesn’t come back to the city for months, it will be March or April before city officials can plan for the additional projects.

“But the first thing in line for funding is Vista Hermosa Sports Park,” Sund said. “The almost $1 million that we’ll need in annual revenue would cover all personnel and maintenance expenses.”

Additional projects the city could potentially examine will have to be determined during the budget process when the city has more historical financial data.

“The projection has been between $2 million to $4 million once everything is built out, so we’re being very conservative with revenue projections,” Sund said. “It’s going to be three or four years before we see where it will really be.”

Currently the Outlets employs 700 people, but its staff will grow to 2,000, Craig said, once the restaurants and the hotel planned in phase two of construction are operational. The plan for the hotel is expected to be filed with the city sometime within the next week. A Chicago-based company will be designing the hotel, but the company operating it is yet to be determined.

Christina Carbonara, San Clemente Downtown Business Association president, said there is some trepidation among business owners in the downtown area, but she said working with Outlets representatives has been beneficial and harmonious thus far.

“There’s a lot of fear on the street because there are competing stores within the price range of downtown merchandise and retailers, but truly I really feel that they are going to bring more business to San Clemente,” Carbonara said. “The resources they have will attract tourists and they will take advantage of both the outlets and downtown.”

A shuttle system is being planned for the Outlets that would transport people from the mall down to the beaches and around San Clemente including downtown. The start date for the shuttle is yet to be announced.

“We just want to utilize all our tools and resources,” Carbonara said. “They have a lot of resources and the ability to reach out to clientele, and they’ve been great to work with. We really want to encourage the economics of all of San Clemente.”

Retailers: More than 35 retailers at grand opening and up to 70 retail locations throughout phase one More than 12 restaurant and dining options in the final development, including four ocean-view restaurants

One 420-foot, three-span, box-girder, pre-stressed bridge that crosses a coastal chaparral-lined canyon 280,000 square feet of landscaped areas to include 724 trees, 207 palm trees and 38,145 shrubs and vines that are maintained by a state-of-the-art, water-conserving, low-volume drip irrigation system[/box]