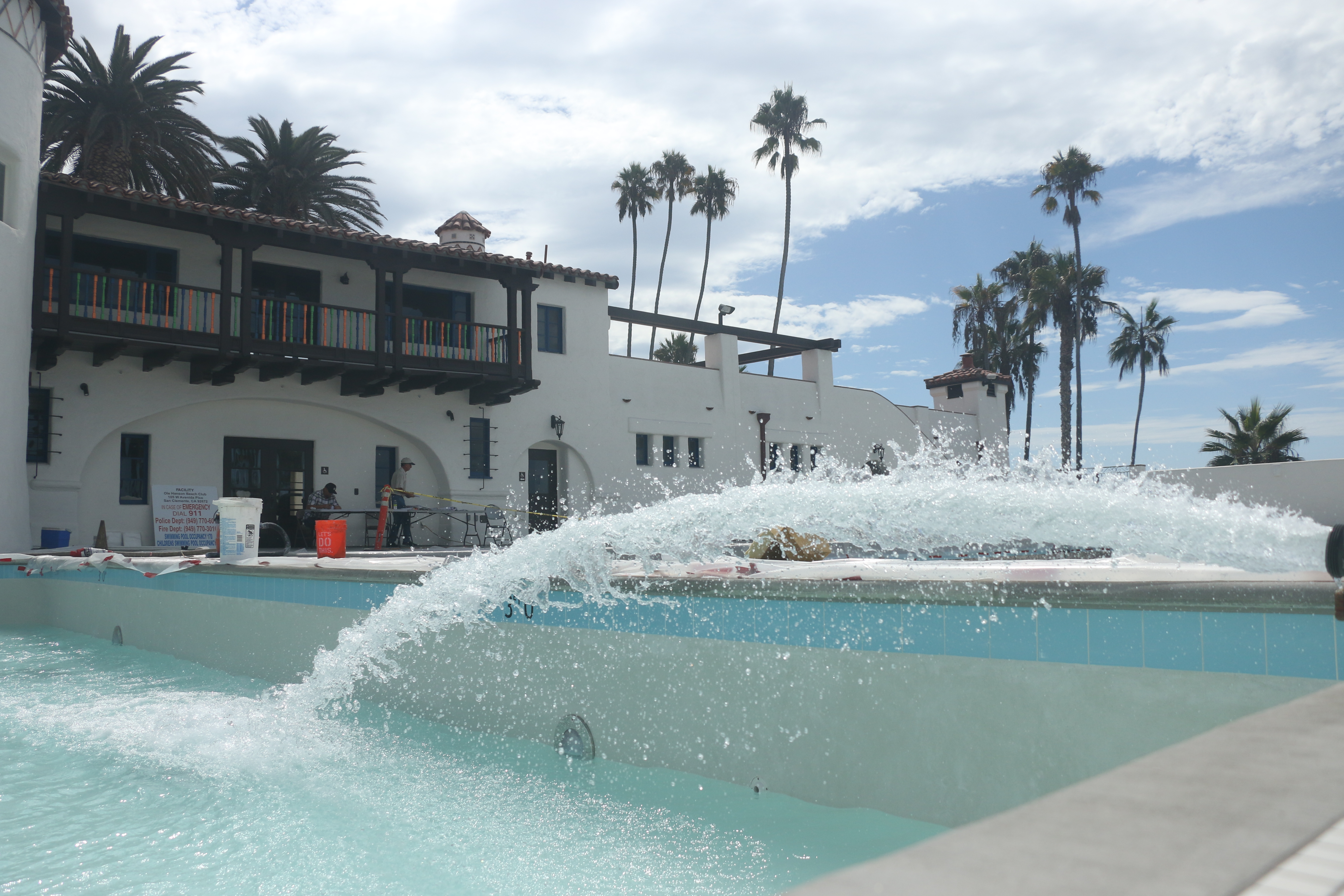 After about five years of closure, a $5.6 million price tag and a contingency waiting with baited breath, the Ole Hanson Beach Club (OHBC) is reopening on Friday, Sept. 30.

Built in 1928, the structure was basically rotting in 2011, according to city officials. Much of the building’s structural integrity had been subject to the ravages of time.

When the city closed it down in 2011, the price to restore it was about $1.2 million. It was quickly discovered there was more than what meets the eye to repair: the old pool was buried under the last pool, the wood was rotting within a lot of places, the roof needed to be redone—basically, it needed to be flipped.

Part of the revitalization of North Beach, the city took measures to allocate funds various times. The pool will be open Friday, but the hours of operation are still in limbo.

On Tuesday, the San Clemente Times took a tour of the swim facility.

The city has upgraded the facility to be ADA-compliant and installed double doors, which were funded by a donation from the Friends of San Clemente Beaches, Parks and Recreation Foundation, according to Amir Ilkhanipour, the city’s senior civil engineer.

Historical aspects have been followed to a tee, including redoing one of the windows that had been removed at some point in time and the colors of the balcony. There’s also a new elevator to take people up to the new upstairs, which is intended to hold weddings and events.

Leading to and from the upstairs, the tiles that adorn the steps have been redone, as the old ones were unsalvageable.

“Before, (OHBC) used to only house the mechanical stuff for the big pool, and the small pool’s (infrastructure) had to be redone,” Ilkhanipour said. “One of the surprises that we had was when we discovered all the plumbing under the current pool. So we had to make sure everything was compatible with the historic design and codes.”

The bathrooms have been upgraded and installed with new amenities.

“Everybody is anxious to get in,” Costello said. “Many of the exterior windows have been maintained. We had to maintain certain aspects of mosaic tiles, and there’s a lot that had to go through revisions.”

The pools are expected to be just about done on Friday.

A new pump station has been put in place in order to maximize water efficiency, Costello said.

Dave Rebensdorf, deputy public works director, said there is a modern IT room, as well as a bridal room for weddings and other uses.

“A lot of the rehabilitation challenges you see—it’s a 90-year-old building—so trying to get it up to standards, especially with its proximity to the ocean, it sustained a lot of damage,” Rebensdorf said.

The foundation of the OHBC also had to be maintained in order to keep the structure’s integrity. All the landscaping has been redone, and a field of emerald grass skirts the circumference of the building.

One change people may notice is the wall surrounding the structure no longer has the historical windows. Ilkhanipour said the walls were so deteriorated and wouldn’t hold up to new standards without new windows.

This article has been updated to reflect the correct year of construction.