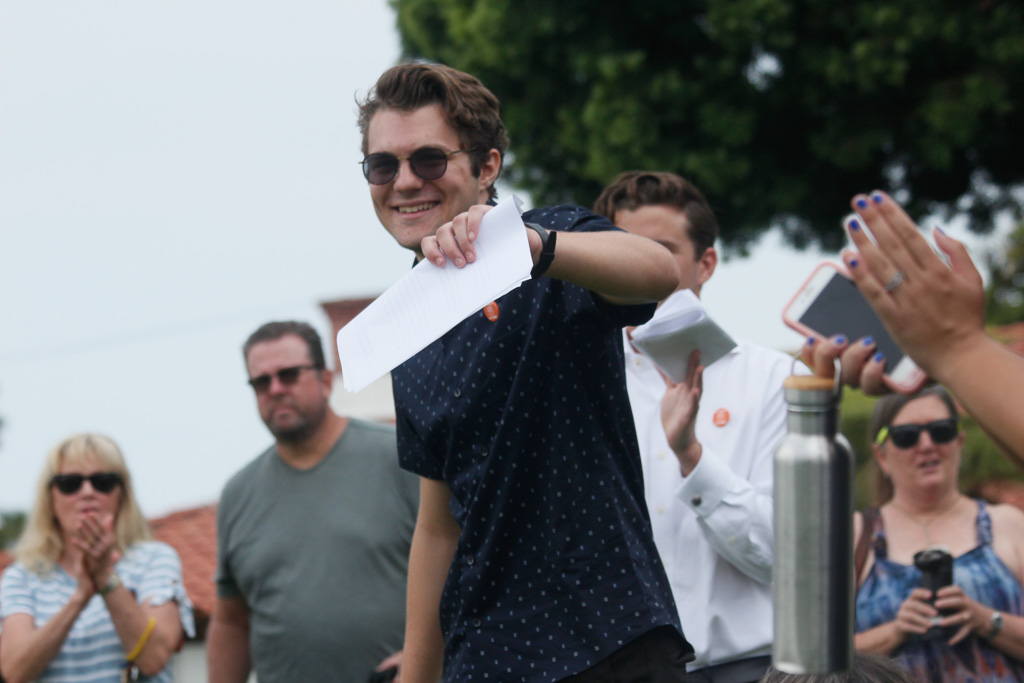 A few students from the high school graduating class of 2018 and other young politicians are intending to run for their respective City Councils. Some of the students only gained the right to vote within the last year, as some are 18 years old.

In San Clemente, Jackson Hinkle and Jake Rybczyk, both 18, along with organizers of Orange County Students for City Council, an organization supporting the young candidates, are running on the same ticket. Their objectives are, primarily, to get cities to run on more green and sustainable fuels as well as adopt overall environmentally safe practices. They are also passionate about the efforts to move the spent nuclear waste at San Onofre Nuclear Generating Station (SONGS) to a permanent storage facility in thick and secure canisters.

At a rally at the San Clemente Library on July 9, the Students coalition spoke about their organization and why they feel they’re the right candidates, who will likely face opponents two, three even four times their age and possibly have years of political and professional experience.

“I think age probably is going to be the biggest obstacle (to getting elected),” Hinkle said. “Even though the policies we’re putting forth, with some of them, people will write-off instantly. When we start having these debates and candidate forums, I think people will see there are projects out there that have worked, like ending homelessness projects, but I do think people will see us for our age first.”

Jake Rybczyk, who intends to run for San Clemente City Council, graduated high school in June. Candidates and supporters of the Orange County Students for City Council coalition held a rally on July 9 at the San Clemente Library. Most of the candidates are right out of high school. Photo: Eric Heinz

The local band Seven Rays performed before and after the rally on July 9 at San Clemente Library. Photo: Eric Heinz

More than 50 people were gathered at the San Clemente Library on July 9 for the Orange County Students for City Council rally. Photo: Eric Heinz

Rybcyzk said at the rally that he’s currently a student at Saddleback College and has been knocking on doors and making phone calls to get his campaign started.

“I feel inspired to run. Living and breathing in this city has taught me so much,” Rybcyzk said, adding he’s been disturbed by the amount of debris on San Clemente’s beaches and mentioned the SONGS fuel issues. “I’ve had to work with this community to benefit me, myself and my own family. I want to see San Clemente have a better quality of life. It’s time for a new point of view.”

In order to receive support, candidates must be 27 years old or younger, pledge not to take any corporate funding for their campaign and raise funds through grassroots donations. The Students coalition has also hosted events where they encouraged people to register to vote.

The organization has already received some notable press in interviews with web-based progressive show The Young Turks and various local media.