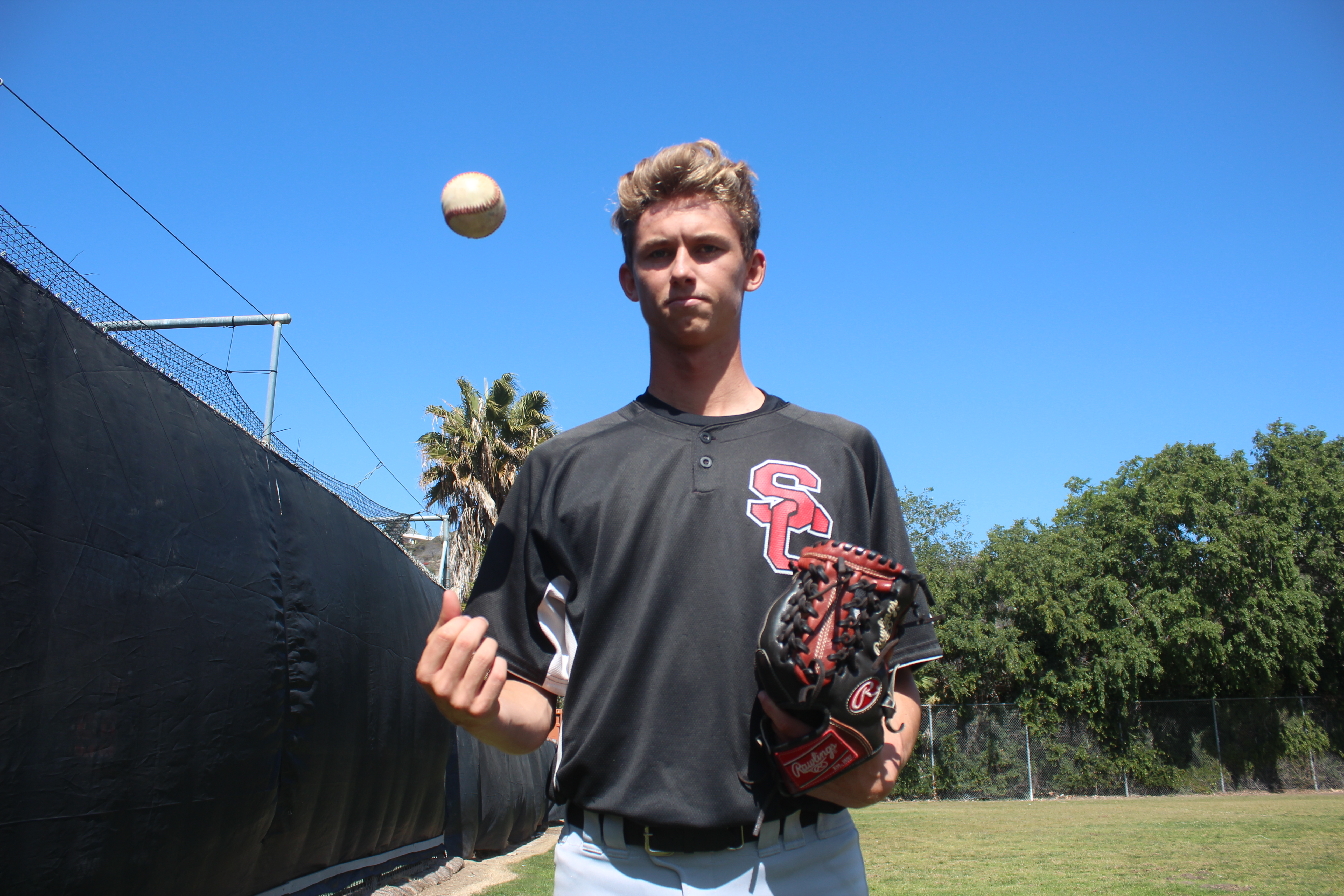 Out of the Ocean, Onto the Mound: SCHS Surfer Turned Pitcher Conner Dand Shining For Tritons

What senior pitcher Conner Dand did this offseason, and has been doing during the first several weeks of the San Clemente High School baseball team’s season, is not normal.

Dand grew up playing baseball in San Clemente Little League and played travel ball. He loved it, was good at it, and had a passion for it. But Dand’s other passion, surfing, began to take up more of his time as he got older.

When he reached eighth grade Dand decided to devote his time solely to surfing and chase the dream of turning professional. He has been a four-year member of the successful Tritons surf team and has competed in multiple circuits and events in the area like NSSA, WSA and Surfing America Prime.

But when his senior year began, Dand decided he missed baseball and wanted to get back on the mound as a pitcher. He hadn’t picked up a ball to throw it seriously with conviction in four years when he reached out to Tritons head baseball coach, Dave Gellatly, asking for a tryout.

Never one to say no to the possibility of adding a new arm to the team, Gellatly set up a bullpen session for Dand. Gellatly and his assistants gathered around to see what Dand had to offer.

Dand, a lanky, 6-foot-2-inch grom fresh out of the ocean, flashed his athleticism, desire to compete and a fastball that was clocked at 80 mph.

“When he asked to come out and throw the ball around a little bit, you never say no. We all thought it would be a one-day thing,” Gellatly said. “But when we saw him throw we saw that he had some good arm action; he was a good athlete … he was throwing at 80 mph topping out. This isn’t something that happens very often.”

In four months Dand went from earning a spot on the team to becoming one of its chief contributors on the mound. He’s made four appearances—two as a starting pitcher—and has allowed only four earned runs in 13 2/3 innings. Dand’s best outing to-date was also his most recent. He threw six innings against Palos Verdes on March 26, allowing seven hits and two earned runs in an eventual 5-4 extra-inning victory.

Dand’s decision to come back to baseball came at the perfect time. The Tritons started the season with several injuries to players that figured to be in the starting rotation. Senior Tanner Brubaker, the Tritons projected No. 2 starter, has been nursing a knee injury and has thrown just two innings all season. Nathan Fleuriau, a transfer from JSerra, has had to wait on the sidelines due to transfer eligibility requirements. The scenario has left the door open for competition.

Dand, along with sophomore Mike McGreevy and staff ace Andre Pallante, have all stepped up to lead the Tritons to a 10-3-1 overall record. Pallante tossed a complete game shutout against Mission Viejo on April 5 to improve the Tritons’ record to 2-1 in the Sea View League.

Dand’s progress on the mound has been exponential. He added weight to his frame and has a pitching repertoire that includes two types of fastballs, a changeup and a curveball. His fastball velocity has risen to 88 mph. Gellatly said Dand’s ceiling is hard to measure because pitching at the high school level is still relatively new to him. The jump to 88 mph in four short months means his velocity could keep rising, Gellatly said.

Dand’s sudden ascension has caught the attention of collegiate programs, and he is interested in continuing his baseball career at the next level. Gellatly said a handful of junior college and four-year programs have reached out to him to hear about the budding pitcher.

Dand still surfs and plans on competing for the Tritons surf team at the upcoming NSSA Interscholastic Nationals in June.

All of the recent results have given Dand satisfaction in knowing he made a good call to return to the diamond.

“I missed (baseball) and I knew my arm would feel good so I wanted to see what I could do,” Dand said. “It’s been fun. It’s a lot of hard work but it’s definitely worth it.”